A porky evening with friends at Tung Nam

As the year is drawing to a close, the tired mind itching to take a break from work and unwind. And catching up with friends over food is one of the best ways to go about it.

Anirban Acharya comes to hometown Kolkata every winter from London where he works. He’s ‘fishy’ like me, with an undying Bengali love for all things fish. We met virtually, in a Facebook food group (Easy guess!). For Bengalis, if food comes, can cinema be far behind? After all that's one of the hot topics in a Bengali adda and my namesake can be considered part of discerning audience. So our virtual friendship soon extended to my Facebook cinema group We the Audience. The group likes to share quality content on cinema, post audience reviews of current and past movies (Bengali, Hindi and English) and engage in discussions. If you are interested, you are welcome to join here.

Coming back to food, our virtual friendship had the first physical meeting in January this year, near the end of his last winter vacation. I took my fishy friend to a pice hotel Sidheshwari Ashram (If you wish to know what the term means, read this post on this blog) followed by a visit to the iconic Coffee House. And we knew we would meet again. Our next food destination options kept getting ticked over Facebook interactions.

Anirban, just after arriving at Kolkata, created a WhatsApp group to coordinate our first meet-up. A dinner meet in Tung Nam- one of the best yet lesser known Chinese restaurants in the city, located in old Chinatown (in Tiretta Bazar, which happens to be India's oldest Chinatown). Our common friend, food blogger Indrajit Lahiri was part of the Tung Nam plan from day zero. Another common friend, food blogger Abhimanyu Chakaraborty, who blogs in Bengali, joined in. Tung Nam is run by a Chinese family from the same locality and is popular in the city pork lover circuit. 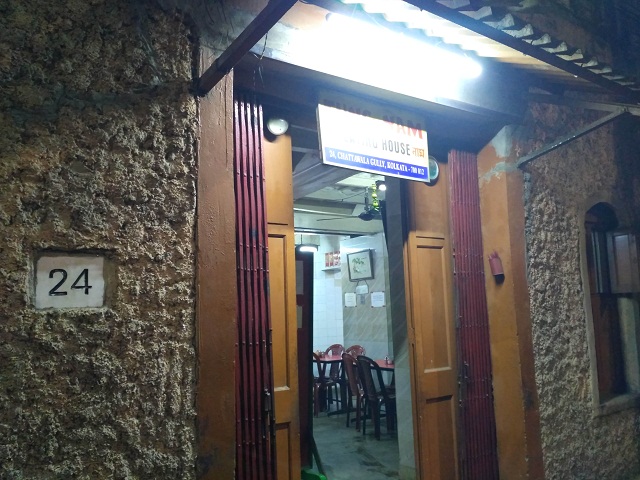 When we met in the restaurant in the evening, I found that not much has changed from years back when I came last. They still blissfully ignore what is called ‘ambience’. In fact, they don’t even call it a restaurant but an eating house. Got the drift? Only the walls of which the paint was old and coming off are now tiled. The colour of the table tops is wearing off and a scooter is parked right inside. An unpretentious set-up like this suits me perfectly fine and if you care for good food and little else, should suit you too. What makes it a more homely experience is, the owner may come to you, take your order, serve you, give you the bill and collect cash. Thus you shall get the best guide for what to order as per your palate. That's what happened in our case- a short, fair, middle aged lady came to collect our order. She didn’t allow me to take her picture, but you can spot her in the next photo. 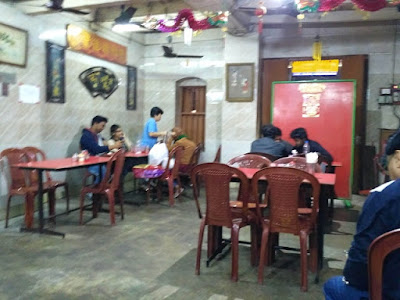 We went off the mark with Steamed Pork Wonton and Pork Wonton Soup followed by Chilli Garlic Pepper Pork, Roast Chilli Pork and Mushroom Baby Corn Pork. The wontons were moist, had the right amount of fat and tasted finger-licking good, as usual! As Abhimanyu pointed out, even the skin of the wonton was yummy! The soup was basically a clear soup but distinctly flavourful, the kind one can call the perfect comfort food. The use of ham choy in the wonton and the soup, typical of this eatery, gives a fine tweak of flavour to these dishes.

The Chilli Garlic Pepper Pork had a scary red colour, yet spicy and tasteful. The Chilli Pork was dry and good in taste but I found it to be rather oily. Also it had a lot of fat which spoilt the pleasure to an extent.

I was bowled over by the delicately flavoured Mushroom Baby Corn Pork. It was a pleasant break from the sharp Chinese flavours. I love mushroom and it added to the taste. It can especially be good for those who like light flavours, like children. It easily earned a place on my list of favourites from Tung Nam. I liked the meat-to-fat ratio of the dishes which is an important parameter of eating pork. Here it seemed to be within 70:30 except the Roast Chilli Pork. After polishing off two plates each of the wonton and the soup and one plate of the other three, Indrajit and Abhimanyu, two Tung Nam loyals, thought of what to order in main course. We were relishing every bit of our piggy indulgence.

The mains arrived- Rice with Pork Ham Choy, Pork with Hamei Sauce and Pork Chou Sui (One portion each). The first dish was spicy and pungent, small chunks of pork on a generous bed of steamed rice. Abhimanyu shared that it used to be sticky rice but has possibly been changed to align to the average customer’s palate. The Chou Sui had rice wine sauce in it. Indrajit shared that as far as his knowledge of Hamei Sauce was concerned, a paste of shrimp and chilli was used to make it. I found a hit of red chilli flakes in all the three dishes. Pork with Hamei Sauce and Pork Chou Sui scored better on taste.

We felt full and decided to call it a day. Our bill, surprisingly, was just Rs 1900 including four bottles of 300 ml cold drink. It’s a pointer to how affordable good food is in Kolkata.


If you liked reading the post, you may visit this blog's Facebook page (click on the link) and hit the 'Like' button to stay connected with the future updates on this blog and more on the page.
Posted by Anirban Halder at 10:31 PM No comments:

2019: A year of thrillers in Bangla cinema

One genre that never goes out of favour with Bengali audience is thriller. And standing now, 2019 looks like a bonanza for the audience with a possible release of five thrillers made by two big names, one young and successful director and two promising filmmakers. Here you go.


Ink
A long cherished script of Pratim D Gupta who treated the audience with a delectable Maacher Jhol in 2017. The script of Ink was selected in the coveted Sundance Screenwriters Lab in 2014. Starring Pratim’s favourites Ritwick and Paoli, it’s about a superstar and a reporter with a mundane job (played by Paoli and Ritwick respectively) and the strange relationship between them. Director-actor Gautam Ghose is playing the editor of the newspaper where Ritwick works and it also has the talented Chitrangada Chakaraborty (who played a cancer patient obsessed by a superstar in Pratim's Ahare Mon). Pratim shot major parts of the film even before his unusual love story Ahare Mon released last year. The credentials of the script will be a major reason for me to look forward to Ink.


Vinci Da
Srijit Mukherji has recently finished shooting his new thriller centred around a make-up artist and a serial killer and looks set for a Nawbobawrsho date (April). The director is back to the genre which brought him fame and recognition with two films. Baishe Srabon, his second film starring Prosenjit and Parambrata, catapulted him to the big league and Chotushkone, which had some experimental treatment and an ensemble of Aparna Sen, Chiranjeet, Parambrata and Gautam Ghose, gave him two national awards, a first for him, besides box office success. Vinci Da boasts of a powerful cast- Rudraneel Ghosh and Ritwick Chakaraborty in the lead, Sohini Sarkar and Anirban Bhattacharya playing a cop.


Khela Jokhon
The name and cast of this dark thriller by Arindam Sil, whose expertise in the genre is well established, was announced last week. It's about the journey of a woman who comes out of the coma and gradually turns violent because of situations contradicting her beliefs. As the director said, film will start on a calm note and gradually turn violent. The eclectic cast has Sayani Gupta (You saw this Bengali actress from Kolkata in Fan), Abir, Adil Hussain, Jayant Kripalni, Indrashish Roy and June Maliah among others. Interestingly, Arijit Biswas, the co-writer of one of this year’s most acclaimed films Andhadhun (a thriller with a dark comedy streak), Badlapur and Agent Vinod, is writing the script in collaboration with the director. To be shot in Odisha, which is less explored in Bangla cinema, and Kurseong, it goes on floors coming February.


Parcel
Finally, Indrashis Acharya, noticed for his debut directorial Bilu Rakkhosh  in 2017 and Pupa this year, both liked by discerning audience, has turned his attention to this thriller starring Rituparna which seems to be about facing the dark past of a character. Indrashis is known for his treatment of the intricacies of the human mind. So the film, a new genre for the talented new director, will be worth looking forward to.

If you want to keep tabs on Bangla cinema, you may join my Facebook group We the Audience, known for quality content, audience reviews and discussions of Bangla and Hindi cinema, here.

If you liked reading the post, you may visit this blog's Facebook page (click on the link) and hit the 'Like' button to stay connected with the future updates on this blog and more on the page.
Posted by Anirban Halder at 10:52 AM No comments:

In an abandoned entrance of an old building, just ahead of Loreto Day School, Sealdah, a middle-aged man dressed in white dhoti-punjabi and tilak on forehead sets up a stall early morning selling sweets. He sells still stocks last, which is early or mid-afternoon. The sweets are from Krishnanagar, which sounded new to my ears (though the said town is famous for certain sweets) as I am familiar with street shops procuring sweets coming from Chandannagar and Howrah. I have also heard of sweets from Katwa (of Bardhaman district) selling on the city streets. So, in this shop, you shall get to sample the famous 'Sorpuriya' of Krishnanagar as part of a decent range on offer (given the small space).

I have been noticing the shop, named 'Amrit Keli', for many years now as I have been going to Loreto to fetch or drop my daughter(s). The name is another unique aspect of it as street shops are nameless. The sweets look tempting and are testimony to the amazing range of street food Kolkata offers in desserts which has no match in India. 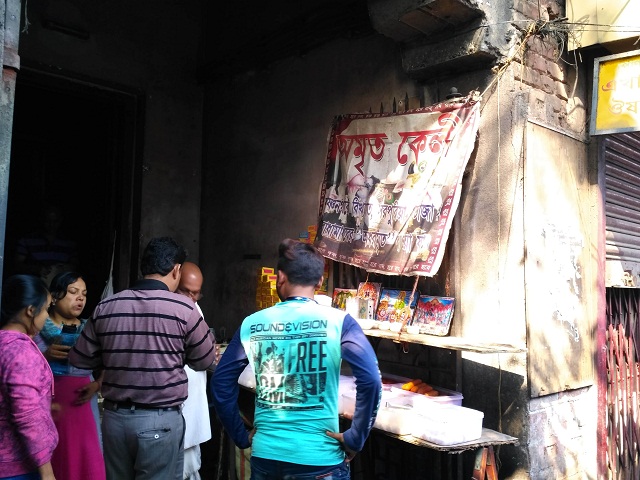 I finally tasted the fare today. Firstly a kheer-covered syrupy sweet (My second favourite category). The thick, kheer-enveloped sweet was so tender, it broke and fell off my finger. The sweetness was moderate, just as I like it. Next was a large lyangcha. It's not often that you get a good quality of this fried sweet on the street. I still went for it as the one I had before was impressive. The lyangcha tasted good! It didn't feel maida (refined flour) much as is the case often. 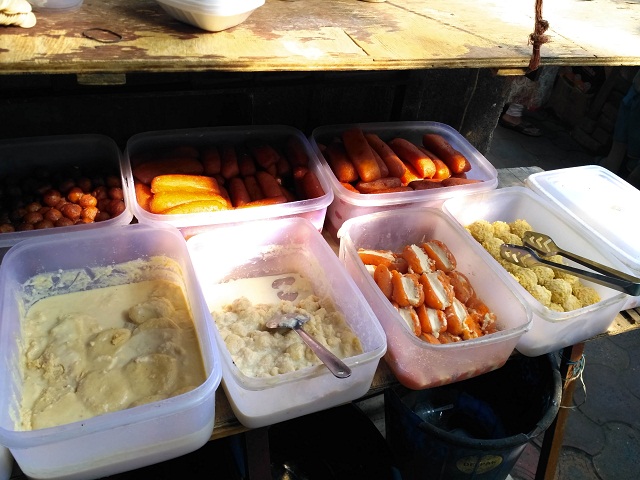 I got chhanar payesh (Kheer made with tiny chhena balls) packed for my post-lunch dessert in office. It was thickly creamy and good in taste! My personal preference would be a bit less sweet though. 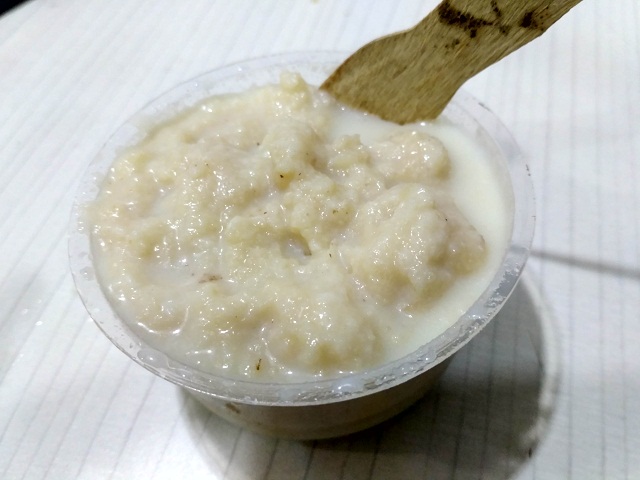 The prices are much reasonable given the quality. My bill was Rs 47.

This calls for more visits to check out the other goodies.

Posted by Anirban Halder at 4:45 PM No comments: