'Bhooter Bhobishyot' is witty, hilarious, a fresh concept and a nice tribute to the Ray brand of humour. Has some super one liners. Go for it!

Would like to add, Paran Bandopadhyay is superb and Saswata Chatterjee lights up the second half as Haat-kata Kartick (once again after his outstanding 'Bob Biswas' in Kahaani).

Wish the film all the very best!
Posted by Anirban Halder at 9:15 PM 1 comment:

Loved to read this article in today's Telegraph about Kahaani's rare box office magic in Kolkata and Bengal! Cheers to Sujoy Ghosh & Co. & the entire cast (Specially the Kolkata actors) to make it happen with a shot-in-Kolkata film with a majorly Kolkata cast and a crew partially from the city. Kahaani magic is largely Kolkata magic as well!
Posted by Anirban Halder at 1:48 PM No comments:

Loved this surreal shot by a friend who loves shooting the city in its various moods and moments. Showing a slice of Kolkata 'adda' (The legendary 'chat' by Bengalis) among some senior citizens.
Posted by Anirban Halder at 12:08 PM 1 comment:

The curiosity to check out the new release is on accelerator mode now!

Posted by Anirban Halder at 11:46 AM No comments:

Bhooter Bhobishyot gets a **** rating in the Times of India review today. Am all the more keen to check it out at the earliest. Some audience feedback will be fine.
Posted by Anirban Halder at 2:29 PM No comments:

In a hurry, but can't help sharing my view on Kahaani briefly. Saw it yesterday. So, here goes my Facebook wall post on the same, slightly edited:


Kahaani is the Kolkata film made in Hindi that finally hits the bull's eye (after failed attempts like Yuva and Raincoat, and Anjan Dutt's BBD that unfortunately never made it to theatre screens). Highly recommended for all Kolkatans and non-resident Kolkatans and all others who love a story-driven, smartly-made film rich with performances. Sujoy & Co., Vidya and Nawazuddin Siddiqui, you rocked! And proud of you - Param, Kharaj, Shantilal and all other actors from Kolkata. Loved to see Indraneil too, who's more of a Kolkata actor now.

Hope to post a complete review. Watch this space.

Posted by Anirban Halder at 1:39 PM No comments:

The 'Kahaani' we are loving to watch 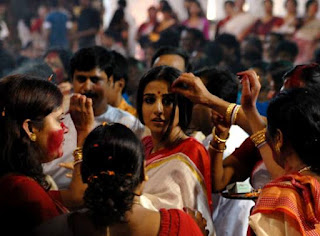 Couldn't resist this one. Just couldn't. Kahaani has been increasingly generating unprecedented buzz in the city since its last Friday release. Nationally too, I learn, the scene is no different. Predictably so, as Kolkata is not a backdrop, but a well-etched lead character in the film, besides Vidya Balan (Or would 'Bidya' Balan be in the right spirit?). The strong reviews, feedback from friends and colleagues.... all are tempting me to catch it ASAP and post something here. Oh... at last a film with Kolkata featuring prominently in it scores with audience (Didn't like Yuva, the last example of such a film that comes to my mind).
Posted by Anirban Halder at 3:10 PM 1 comment:

It was good to know that the arrogant and foul-mouthed youngster Akash Banerjee was finally arrested in an unusual climax of a not-so-uncommon road drama where he and his friends in a car violated traffic rules yesterday, then abused and assaulted a traffic constable and shoved the traffic police inspector on duty while dropping the name of his famous aunt (father's sister) - none other than the CM of the state - Mamata Banerjee and threatening with grim consequences.

It was great to know that the arrest was at the behest of none other than the CM who was on visit to Darjeeling, and showed good governance in a quick, exemplary action (Though this must be noted that that media had raised its voice about the incident by then). It was indeed a new and welcome experience for people of the state.

But a question remains. Is this the 'neutral' police administration that the CM promised after she took the charge? She has the moral duty to answer (Especially since she heads the home ministry) what precisely led the police to let the brat and his gang walk out of the police station scot-free initially?
Posted by Anirban Halder at 10:34 AM No comments: