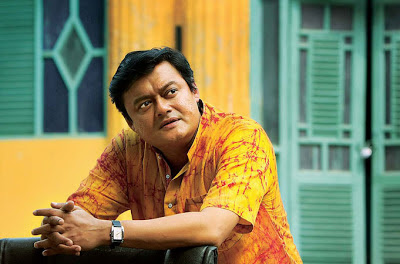 Looks like someone is on the rise to reach the highest sphere in Bengali cinema. And no prizes for guessing the name. Yes, finally Saswata Chattopadhyay seems to reach where he deserves to be - the league of lead actors in Bangla cinema - the space currently ruled by Prosenjit. In fact, he will be a challenger to the numero uno. There's a condition here but. C/o Sir, his yesterday release, where he plays the title role, needs to score high at the box office, following the footsteps of the huge applaud that his performance in the lead role in his last release Meghe Dhaka Tara  is generating.

That he is an actor of outstanding capability was not in doubt for some years now. But he was always meant to shine in a 'character role'. His 'Bob Biswas' in Kahaani changed all this, helped by his 'Haathkata Kartick' act that lit up the second half of the 2012 blockbuster Bhooter Bhobishyot. Around that time (or a little while ago) he was being considered for the lead roles thanks to years of consistent good work, that started with Bong Connection in 2006.

Besides C/o Sir and Meghe Dhaka Tara, he will be seen as the leading man in Anik Dutta's (of Bhooter Bhobishyot fame) Ashchorjyo Prodip, a satire on today's consumerist society (which, I have a hunch, will pay a tribute to Parash Pathar by Satyajit Ray, who has an ardent admirer in Dutta). And his portrayal of a police officer in Raj Chakraborty's eagerly awaited Proloy is also likely to consolidate his position as a truly versatile actor.

Saswata doesn't have the screen presence of Prosenjit, or the youthfulness of Parambrata, who is also doing the lead roles (thanks to Kahaani and Bhooter Bhobishyot again). Nevertheless he can rule the screen, on the sheer merit of his acting prowess. And if he finally reaches the top league, given the right opportunities, he will stay there for years.
Posted by Anirban Halder at 1:32 PM No comments: