A tete-a-tete with filmmaker Soukarya Ghosal

Soukarya Ghosal was noticed with his first film Pendulum (Bengali, 2014) which was about a surrealist painter. He made a film for film for television in 2015 (shot like a film as it happens in this Zee Bangla Originals series of films) named Load Shedding which I liked for the most part. As he is ready to release his next feature film Rainbow Jelly (Bengali) on 25th May 2018, he talks to Kolkata Curry neck deep in pre-release work. The most curious bit of Rainbow Jelly is that its protagonist is played by Mahabrata Basu who is a special child. 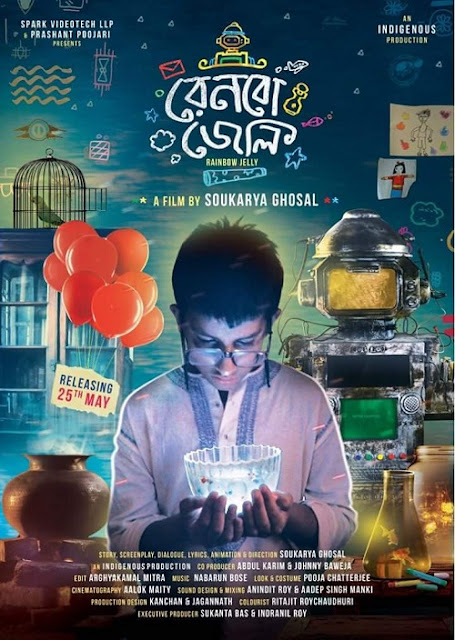 Kolkata Curry: You Facebook profile says you are an animator. What prompted you to become a filmmaker?

Soukarya: I am not an animator. Actually I learnt the process of animation while doing the post-production of Rainbow Jelly. I was a graphic designer and illustrator working with a leading Bengali daily, doing cartoons and writing a few features and page 3 articles. Later on when I came to filmmaking with Pendulum I chose painting to be the subject. The protagonist is a painter who takes his audience into his painting and the space of the painting becomes the real space when one goes into his painting. So, the influence of art was there from my first film since I came from that background. While doing Rainbow Jelly this influence was also there on Ghnoton’s wall and while writing the script I thought that the imagination of Ghnoton would be his own drawings.

KC: Rainbow Jelly is a food fantasy. That's a fresh concept. What was the germ of the idea? Why did you choose to spin a yarn through different flavours of food?

S: Rainbow Jelly is known as India’s first food fantasy film. The concept of food fantasy is that you weave a fantasy story around the basic structure of food. My film is about the seven tastes of food- Sweet, salty, sour, spicy, astringent, pungent and bitter. What I’ve tried to say is that we change in character based on the tastes (of food we eat), like chocolate triggers happy hormones. But it’s much beyond that. While writing the story I was referring to Ayurveda where I found an interesting concept - Don’t make medicine your food. Make food your medicine. With properly recommended, different kinds of food you can heal up your body and mind. Any ancient philosophy believes in development of both body and mind. Ayurveda traces it with much more details like chemical combinations of food but I didn't want to go into such depth as my film is a fun film with children all around and a mysterious character. I just wanted to tell a story where something is happening...something funny is happening with the structure of taste and the change in characters. We also included seven colours with seven tastes and seven is actually a magical number. If you see the film you’ll find that there are seven days, seven colours, seven tastes and seven notes of music. We have merged a food fantasy with all of that. It's a fresh concept which came to me while I was learning cooking. I love to eat and I love to cook. While cooking I’ve found that with your state of mind the taste of the food actually changes. I’ve also found that if you are happy the taste of food is different from the food you prepare when you are not happy. So from there the germ of the idea came and I thought that what if the world can be changed with food.

KC: Tell us how you found your protagonist Ghnoton in Mahabrata Basu who is a special child. What were your ways of getting him follow your instructions on the set?

S: I found Mahabrata with the reference of Moushumidi (Moushumi Bhowmik) who has sung a song in my film. She had come to know that I was looking for Ghnoton. She goes to a school of 14-15 students and teaches English there. I had briefed her on Ghnoton and she said that she knew someone there who she found close to Ghnoton. So she asked the boy to come to my house. Mahabrata came with his father. Initially I didn't think he fit in because he had numb expressions like all special children. But after four-five minutes when he smiled, it was so radiant that I was convinced that he was my Ghnoton. I immediately locked him. After selecting Mahabrata, his mother Gargi-di called me and asked how much of dialogue there was in my script for him. I said that there was just one scene without him and the film had quite an amount of dialogue. She told me to kindly leave Mahabrata therefore because till then in his school there was no concept of memorizing or writing exams. The concept was something alien to him. But I said that I wanted him. While I write a script I do sketches of characters, in black & white and colour. I told her that the features (of Ghnoton) were very close to Mahabrata. Gargidi then said, “OK, fine, give me a few days.” After three days she sent him to my house and asked me to try out the first few scenes with him. He came to my house, ready with the first five-six scenes. When he was stuck with the dialogue and couldn't recall the lines, I would give him the script, but he couldn't make out anything looking at it. When I asked him, I found out that he actually memorized the script because his mother had constantly narrated it to him like Ramayana or Mahabharata after his return from school and that's how he memorized it like shruti of Veda. It was an interesting finding for me that he mugged up the entire script by listening to it. When he came to the floor he was so ready that  he remembered his own lines and others’ lines too. It didn't happen with the other actors who weren't ‘special’ like him. There were directorial assistants to give them the cue (when they couldn't remember the lines) but with Mahabrata my assistants had little to do. With the dialogue he even remembered every narration like the camera was panning or the camera was in the trolley. So Mahabrata was an exceptional case to deal with. I found my protagonist Ghnoton in his smile initially, but later on his numb expressions were very painful for me to change. Then I devised this ‘Smiley method’. I drew 67 smileys on his script- Happy, sad, angry, worried, amazed, irritated etc. I used to make him practise the smileys fast, changing expressions. (While taking shots) I used call out the smiley names and his reaction would change with the command. Mahabrata was an obedient child on the set and above everything he had a tremendous sense of rigour which is a gifted thing. This rigour helps him do certain things that a normal child can not. Actually he is very conscious of his own state and he is constantly challenging the odds he is facing as he always wants to win. And by that he is constantly overcoming himself and developing himself. That makes him easy to deal with as when he used to be stuck with something, most of the times he came up with more rigour to solve the problem.

Posted by Anirban Halder at 6:55 PM No comments:

The aftermath of the double blast in food scene

As if the fear of dead and formalin-preserved chicken in our favourite chicken delicacies was not enough, the carcass meat scam dealt Kolkata a mighty blow last month.

Suddenly we are suspecting our favourite chicken roll, chicken momo, chilli chicken, mutton biryani and kawsha mangsho and being on the alert about everything with chicken or meat in it, be it roadside eateries or well-known restaurants. We want to be sure we are not eating carcass meat or formalin-laden dead chicken in drool-worthy dishes.

The other day, I saw that the tawa earlier busy frying parathas now idle, the heap of chicken drumstick and chilli chicken displayed outside now noticeably shrunk and just a handful of customers sitting at a popular street eatery on Arabinda Sarani at Karbagan which I’ve always found crowded. A few feet away, the biryani handis which I always used to find open for filling boxes now covered and the staff waiting for customers in two popular roadside biryani shops. This is a representative picture of the city. Biswanath Ghorui aka Mangsho Bishu, the arrested carcass meat kingpin, has scared the daylights out of Kolkatans.


Egg roll in snacking and dim-bhaat/ machh-bhaat or khichudi in working class lunch are suddenly seeing an Uber-like surge in demand, beating their respective eternal rivals- chicken roll, chicken-bhaat and fried rice-chilli chicken combo hands down. A sizable population is now preferring egg, fish and prawn (those who can afford) over chicken and mutton even if it is a compromise with the palate. The trust is shaken and customers aren’t taking chances.

Restaurants and eateries are seeing an unprecedented free fall in orders for chicken and mutton dishes and a relatively higher demand in prawn and fish options. As a natural reaction, restaurateurs are now desperate to prove the freshness of their meat and poultry and some of them are even putting up their suppliers’ names and phone numbers on display subjecting them for public enquiry and inspection to earn back customer trust. I read that small restaurant owners from Hatibagan who shop for their chicken and meat themselves and are demanding that chicken and goats be cut before their eyes as a condition to buy.

A huge food group on Facebook is now seeing posts of mostly home-cooked dishes whereas till recently the feed used to be balanced by posts of dining out- predominantly chicken and meat dishes besides fish. I assume paneer jokes circulated by hardcore non-veg Bengalis (Like ‘paneer biryani’ is a joke by itself) are dipping now.

This social boycott is being reflected in Bengali papers publishing recipes of versions of popular non-veg foods made with green jackfruit and green plantain because people are now even wary of buying raw chicken/ mutton that is already cut and insisting on getting it cut before their eyes. I am sure earlier hardcore non-vegetarian Bengalis would quip that Enchorer Kebab (Green Jackfruit Kebab) was an oxymoron but they are possibly mellowed enough not to react now though they may still be far from accepting those options.

Is it a passing phase for a largely non-vegetarian city that loves eating out like few other cities in the country, or will it change Kolkatans' food habit in the long term? Will the Bengali be back with a bang to his favourite chicken roll, mutton biryani and chilli chicken in this year’s Pujo? Time will tell. I will be curious to know. All that I feel is that this will clean up the food chain to some extent and improve people's judgement of food (Like anything that's cheap is not good to go for, because cheap indicates compromise).


If you liked reading the post, you may visit this blog's Facebook page (click on the link) and hit the 'Like' button to stay connected with the future updates on this blog and more on the page.
Posted by Anirban Halder at 5:08 PM No comments: