It’s easier preached than practiced. So it shook me up a little when I read this SMS. It was sent by my daughters’ school yesterday wishing for Eid ul Zuha (like it does on all occasions). It is a well-known missionary school in central Kolkata.

Here it is:
Dear Parents
May the guidance and blessings of Allah be with you and your family. May Allah bless you with peace and happiness.

My respect for the school went up! By the way, it is Loreto Day School Sealdah.

If you liked reading the post, you may visit this blog's Facebook page (click on the link) and hit the 'Like' button to stay connected with the future updates on this blog and more on the page.
Posted by Anirban Halder at 1:03 AM No comments:

The onset of autumn calls for a healthy spin in diet to keep the monsoon pathogens away. And a vegetarian diet is spot on in this regard! With this core idea, Casa Kitchen, one of the leading gourmet vegetarian restaurants in town, is holding Casa Healthy Fiesta which aims to strike a fine balance between health and taste, and guilt and indulgence with select a la carte offerings in soupy noodles (as starters), salads, main course and dessert.

The dishes have been cooked in olive oil or even without oil and handpicked ingredients like zucchini and bell pepper (high in anti-oxidants), lemongrass, soya bean, oats oats (improves immune system and lowers bad cholesterol) and spinach have been used to take care of the health quotient.

In mains, apart from the indulgent Chole Masale, Paneer Tikka Rassedar and the slow-cooked Dal Bhanjara, the highlights are the signature preparation Spinach & Oats-based Hariyali Kofta and Thalipeeth- a popular Indian bread made with whole wheat, ragi, bajra and gram flour.

A sugar-free chocolate brownie will draw a close to a heartening meal, limiting the guilt.

If you liked reading the post, you may visit this blog's Facebook page (click on the link) and hit the 'Like' button to stay connected with the future updates on this blog and more on the page.
Posted by Anirban Halder at 10:02 AM No comments:

The Barrackpore railway station- a landmark in Sealdah main section

The station building looks strikingly different from all others passed by before it and waiting on the way on a local train journey on Sealdah main line. Its huge, imposing colonial structure stands out.

Barrackpore railway station, the lifeline of the suburban town Barrackpore, which is the headquarters of Barrackpore sub-division of North 24 Parganas district, was built by the British in the nineteenth century. It was a follow-up to their building India’s first ever cantonment in this town in 1772, which is still up and running. 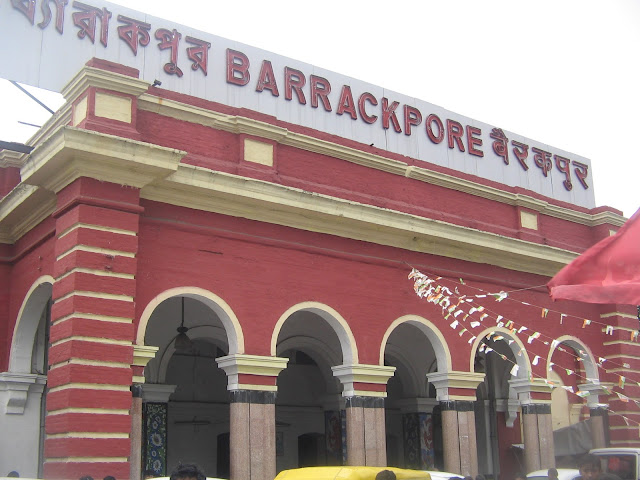 With time the station has been extended to more and longer platforms from the initial two. It was set up with basic infrastructure- platform no. one for up trains (from Sealdah) and no. two for down trains. Presently it has five. It helps in running a Barrackpore local train service (Barrackpore to Sealdah/ BBD Bag) which serves several thousands of daily commuters in and near Barrackpore. There are people living in Palta, the next station (or even a little further) who arrive at Barrackpore station on road or by train to catch a comfortable journey to work in Barrackpore local.

Which catching an ‘Up’ train to Barrackpore from Sealdah or Dum Dum one doesn’t have to bother whether will stop there. There is no local train that doesn’t stop at Barrackpore, such is its importance in the main section.

The platforms are different from each other in characteristics. Platform no. 1 is the busiest in terms of train frequency. It gets 'Up' trains (from Sealdah and other terminal stations like Majherhat etc) and flags off  'Down' Barrackpore local to Sealdah. Several small shops are at its southern end, selling flower, cosmetics, imitation jewellery, tea etc. There is an old newspaper and magazine stall on this platform. A no. of station offices are located here, unlike other stations, apart from a large booking office on the outer side.  It also houses a reservation counter at the northern end.


There is a medium-sized Hanuman temple set up adjacent to platform no. 1 decades back, which contributes to the unique character of this station. The temple commands a large following. It observes a big puja on occasions drawing scores of devotees. There is a section of passengers who chant Hanuman’s name (“Bolo bolo Pawanputra Hanuman ki jai”) whenever a Barrackpore local leaves the station.

The mural work and burnt clay sculptures on the wall also contribute to its unique character.

Platform no. 1A, which is the youngest, passes ‘Up’ trains and flags off Barrackpore locals. This platform has very few shops. A lot of vendors sit on this platform selling fruits and food items like chanachur, boiled egg, ruti-tarkari etc. The last two items are available only in the evening. The fruit vendors sell one fruit each and their attraction is that they offer quality at cheaper rates compared to market.


Platform no. 2 and 3 are attached. The former passes ‘Down’ trains to Sealdah and the latter ‘Up’ trains from mainly Sealdah, and BBD Bag, Majherhat and Budge Budge. There is a tiny bookstall also selling newspaper and magazines, an authorized shop selling tea, coffee, lassi and snacks from kochuri to patties, cakes & pastries. Very few stations have such a shop with a wide range of offerings. It faces both platforms. There are many other shops, mainly selling food, across its length.


Platform no. 4 is the least busy. It gets select down trains going to Sealdah, BBD Bag, Majherhat and Budge Budge. Hence it has a laidback nature. Many local residents of various age groups regularly come here and sit on the numerous constructed seats dotting its length for an afternoon or evening adda (chat session). It has, along with platform no. 1, one of the longest platforms in the main section- perfect for arrival and departure of express trains as a terminal station.

There are two over bridges to handle the larger passenger outflow and platform to platform movement compared to other stations. A third has been recently built towards the northern end.

The unique character of the station also borrows from the birds that inhabit it. Hundreds of pigeons and Indian myna (Shalik) could be seen at the roof at night even some years back. Their collective chirps could be heard and give the place a unique sound. The number has much diminished now.

A slice of history from a reliable source tells me that Barrackpore had a race course behind the criminal court (far away from the station) and a special single rail track took steam engine-driven trains there, carrying British passengers who would attend the race.

Two different worlds can be seen at the two sides of the station. The eastern side is like any small suburban town, with small makeshift shops and rickshaw stand. The western side looks like a district headquarter. A small market opposite the station, a couple of restaurants including the famous Dada Boudi (for its biriyani), V Café, a row of decent shops and the municipal auditorium  Sukanta Sadan on SN Banerjee Road put it in sharp contrast of the eastern side. The latest addition is a branch of the brand new Bandhan Bank. The area just outside the station is a lassi hub and a roll hub put together, thanks to a stream of lassi shops on one side and another of roll shops on another side.

The station has good road connectivity. SN Banerjee Road is one of the main roads with buses connecting the places down north, Barasat and Kolkata along with auto rickshaws on local and longer routes. BT Road meets this road at Chiria More down about half a kilometre from the station.

I was born and brought up in Barrackpore and have seen the station evolve. It has gotten better with time despite passenger population increasing in leaps and bounds in the last ten years.

Posted by Anirban Halder at 8:45 AM No comments:

1. It has a delectable ensemble cast of eleven actresses including Rituparna, Sudipta and some other fine performers. Nothing of this sort comes in living memory.
2. It is a period drama with partition of Bengal as a backdrop. Expectations from the director are higher after Jatiswar.
3. It has an equally delectable ensemble cast of actors, with established names.
4. The big canvas of the film, its mounting. It’s his most ambitious project so far as admitted by the director.
5. The trailer has fanned the eager wait.

An additional attraction: Avik Mukhopadhyay, one of our finest talents and one of my favourites, is the Director of Photography in a first time collaboration with Srijit. I trust him to not only do complete justice to the period piece but also elevate it at a visual level.

Posted by Anirban Halder at 1:27 PM No comments:

As Bauddhayan Mukherji’s keenly expected debut film Teenkahon released on 11th September 2015, I had a sense of déjà vu as an audience member.

It is because of the similarities between the film with another debut that took place about nine years back. Aniruddha Roy Chowdhury’s Anuranan made a mark and gave birth to a filmmaker in the talent-starved Bangla film industry.

Let’s look at the common chord of the two films- 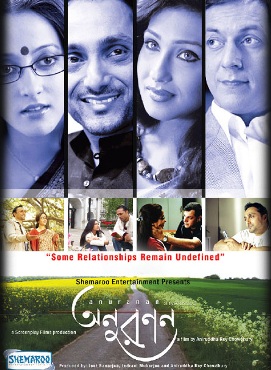 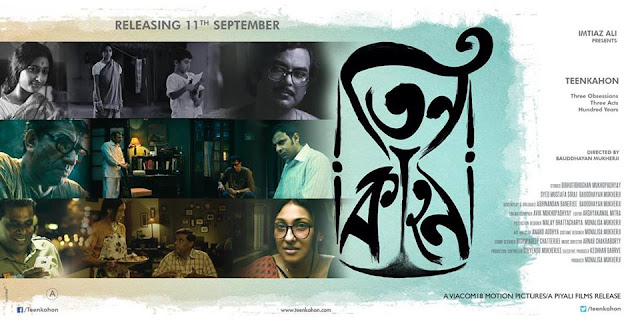 Posted by Anirban Halder at 2:30 PM No comments: