Wanted contributions on the theme in the heading from the Facebook group of this blog and from a few friends (incl. virtual friends) . This was the first to arrive. Loved the essence that it captures- Bengali's obsession with monkey cap as soon as winter arrives! Underlines the thoughts that the 'photographer by passion' puts in his craft.


Here's one more by another friend that I thought of putting up. Just picked it up from his Facebook wall. A new resident comes to Park Street in place of an iconic resident.

The annual dining out

We all knew the annual dining out from office is going to score a hat trick at Barbeque Nation. But it changed to Flame n Grill- the place where we first relished almost an entire meal with starters (unlimited kebabs, that is!).We are going to Flame n Grill Mani Square this year in the last week of December as our annual ritual, the day we keenly look forward to throughout the year.

Asked for an opinion, I voted for Flame n Grill, though I love BBQ Nation a lot. Here's why: 1. FNG's fish kebab has an edge over the one BBQ N's, and 2. FNG beats BBQ N in frequency of service (at least that has been the experience twice at the now non-existent Flame N Grill Park Street).

Posted by Anirban Halder at 8:30 PM No comments:

Jatiswar: the poster on social media 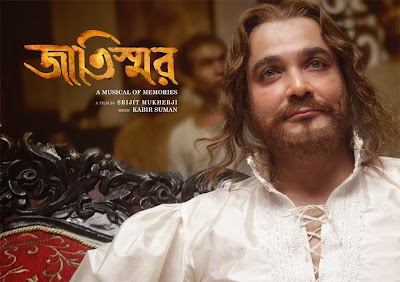 Liked this poster in the Facebook community of Jatiswar (the Srijit Mukherjee film slated for a 20th December release) and made it the wallpaper of my workstation, something I am habituated to. It drew attention of a few younger colleagues, who were unanimous that Prosenjit was looking impressive and convincing as a European. I agree. Shared a brief of the movie to the curious audience.
Posted by Anirban Halder at 5:43 PM No comments:

Loved Ashchorjyo Prodip. Compact and precise, with an optimum length of two hours. Well made in all departments, with good performances lead by the superb Saswata as protagonist (This proves his mettle yet again as a dependable leading man, given the right role).

Anik has evolved from Bhooter Bhobishyot, as was expected of him (Considering the film could be better in some aspects). He can now be counted among the best in Tollygunge.

Not only one can relate to it, it does make one think and look back at life.

Audience has also lapped up the film as evident in leading plexes holding on to four shows in third week, including three in prime time.

Hoping to come up with a full-fledged review.
Posted by Anirban Halder at 9:58 PM No comments: