The first bit of news about today's BJP-sponsored state strike that reached me was that a bus had been torched at Kestopur (the next bus stop to Baguiati, my home stop), buses were hardly visible on VIP Rd and some shops had been damaged by strike supporters. It followed with a news of damaging a private car at Baguiati junction. Apprehensive, it was a little late for me to go out to work.

The busy Baguiati junction (the busiest on VIP Rd) wore an absolutely unusual look- no buses (just saw one overcrowded mini bus of Airport-Jadabpur route in about 30 minutes apart from empty chartered buses refusing to entertain anybody attempting to stop and board them), hundreds of people in the middle of VIP Rd, police personnel and police vehicles. People were making calls to office or business associates updating the situation and giving an estimate of possible delay in reaching the destination. What beat me was the total absence of any govt bus, while today's Ananda Bazar Patrika reported about state govt's announcement to run as many buses as possible for the people who want to make it to work.

The news that shocked me after reaching office was that some strike supporters have wrecked havoc in DLF building (the major office complex of New Town, Rajarhat) and beaten up people including employees of IBM and Vodafone for defying the bandh. What, possibly what, can give BJP and/ or other seven marginal political parties supporting the strike the courage to do so and the other acts of violence, while BJP, the biggest of them doesn't have a single legistator in the state? Did they have patronage from some unexpected and powerful 'friends' in the political circuit?
Posted by Anirban Halder at 2:04 PM No comments:

Caught the second episode of the new comedy show on Star Jalsha- Laugh Aaj Kal yesterday. This 10 pm show is one of the two new shows (the other is the celebrity talk show 123 Star) that started on September 23 to be telecast Monday-Thursday.

The show borrows heavily from the first and second versions of Mirakkel. In the first version Mir would do stand-up comedy, followed by a celeb interview. It gave way to the second version (as, apparently, Mir's stock of good jokes dangerously diminished) Mirakkel Akkel Challenger which was basically a stand-up comedy championship. Laugh Aaj Kal blends stand-up comedy by star performers of Mirakkel Akkel Challenger and other similar shows with a celeb interview by the anchor Anindya Chattopadhyay. It also has a band playing along with a comic name, called 'James Band' (Remember 'Bandage' of Mirakkel?).

The only novelty of the show is Anindya, with his brand of humour peppered in the interview. Yesterday's guest was actress Payel Sarkar. She looked glam and at ease in a purple off-shoulder dress, facing Anindya's volley of witty, humourous questions and one-liners.

The show also marks Raj Chakraborty's debut as a producer, with direction by his erstwhile assistant Abhimanyu Mukhopadhyay (who has also scripted Prem Amaar). From an experienced television director like Raj, the expectation was higher. Let's see how it goes.
Posted by Anirban Halder at 2:57 PM 1 comment:

The new buses- a revolution on street 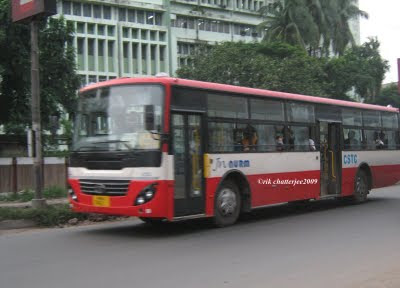 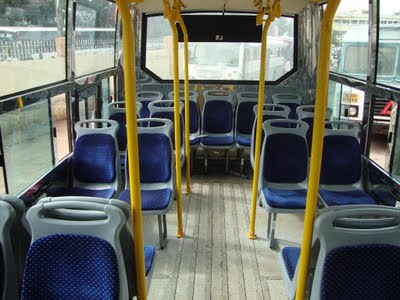 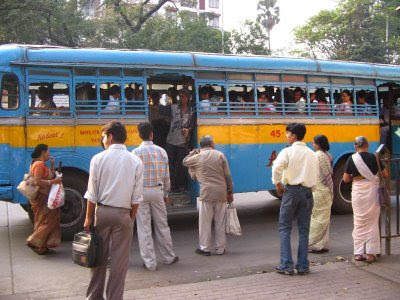 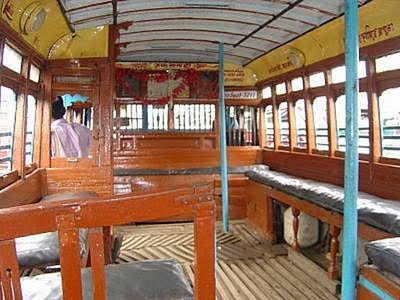 The new JNNURM buses filling the huge void of private buses (after the phaseout of old buses) besides adding to the govt. bus fleet are a welcome change, no short of a mini revolution for Kolkatans familiar dealing with 'tin boxes' called private bus with uncomfortable seating, small wooden windows and more space for standing than seating (See picture 4).

In a stark contrast the JNNURM buses are big, airy, has modern, comfortable seats with more leg space, large glass windows and low footboard. And, as it should be, they have more seating space. The best part is that the govt. and private buses have similar models and the the private JNNURM buses have the same fare structure as their older counterparts.

A big 'thank you' to the Govt. of India for the new bus scheme under JNNURM. It's a bliss that possibly every Kolkatan using buses for regular commuting are embracing with open hands and craving for more.