Had lunch from this Chinese joint on RN Mukherjee Rd on 26 February. Run by an old Chinese man, this place offers what every average middle class Bengali identify as the basic Chinese dishes – fried rice, chowmein and chili chicken, along with Vegetable Manchurian. Unlike an average roadside Chinese joint they serve chili dipped vinegar along with chili and tomato sauces (Though not a Chinese sauce, they possibly serve it on popular demand).

I ordered a plate of vegetable fried rice and two pieces of Chili Chicken (they sell it by pieces like an average street joint, reflecting the democratization of this dish that happened more than a decade back) and took two more pieces later. They didn’t spoil the fried rice by adding soya sauce, and the chili chicken had adequate chicken in it, unlike some of the joints where you find little of it inside the thick cornflour crust. The rice was well-cooked with the right vegetables. The chicken was not pungent and the gravy was slightly lighter than its street counterparts. And the prices were as per market rates only (Vegetable fried rice at Rs 14 a plate).

They cater to the lunch market and wrap up by 5 pm. The joint is located at the crossing of Mangoe Lane and RN Mukherjee Rd, at the sidewalk by the old CTC office at 14 RN Mukherjee Rd. Would like to come back.
Posted by Anirban Halder at 11:57 AM No comments:

Given Kolkata’s fast rising preference for the metro as the best mode of mass transport, recently noticed in a big way after the extension from Tollygunge to Garia, the announcement of airconditioned rakes coming in was like a dream. But the experience of service so far has varied from pleasant to below par.

Boarded one such train (There is one, or two at the most now) from Dum Dum, the terminal station, on 26 February on way to work. The AC wasn’t working, and it started feeling hot, and suffocated to some older co-passengers. Some of them remarked that the regular rakes are better and they are happy with them as they allow air flow. Some said that if there was a problem in running the AC, this rake should not be run at office hours. To add to it, the announcement of next station in public address system which is in sync with the LCD display in the compartment was wrong. Some joked at the announcement bit that since it was just after the rail budget day, the Metro staff were probably taking it easy. The airconditioning was started and the announcement (and the display) got corrected at Central station (The 7th station from Dum Dum).

To be fair, I’ve boarded an AC rake a couple of times in the past. The airconditioning works fine, and coupled with the new design, the experience was cool.

As summer approaches, the crowd for AC metro is set to rise a lot this year. It’s high time the snags are rectified, else it can give vent to passenger dissent in a major outburst. Till it is smoothly operated, running the rakes in off-peak hours may not be a bad idea.
Posted by Anirban Halder at 11:44 AM No comments:

Srabanti and Ananya - most searched on KC 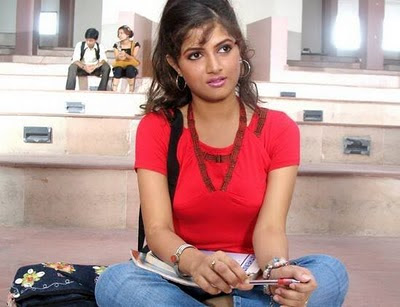 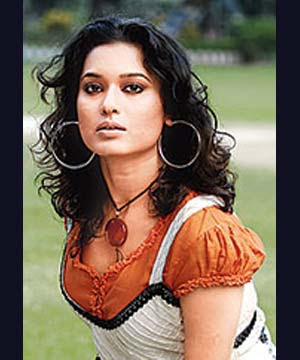 Srabanti (Picture on top) tops as the most-searched celebrity on Kolkata Curry, closely followed by Ananya Chatterjee (Picture above), as the blog traffic analysis by Blogger.com shows! And it's happening for the last few months. A true reflection of how their work is working for them in the popularity charts.
Posted by Anirban Halder at 10:30 AM No comments:

Looks like it's the season of Bangla avatars of reality shows on national television. After Challenge Nibi Na, a show apparently inspired by Desi Girl that was aired on NDTV Imagine, being produced by Kaustuv Roy of RP Techvision and Bangla Talkies and currently being shot in a village in Bolpur, Venkatesh Films announced its forthcoming reality show on Star Jalsha, having seemingly taken inspirtaion from Iss Jungle Se Mujhe Bachao, which was aired on Sony Entertainment Television, on Facebook today.

Challenge Nibi Na will feature celebrities like Swastika Mukherjee, Arindam Sil, Rimjhim Mitra, Sohini Pal, Kanchan Mullick among others. It will engage the celebrity participants in various rustic games and tasks (incl. ploughing) for a good number of days, totally cut off from their familiar urban life.

The Venkatesh show will challenge the participants, this time it's common people, to survive 1000 hours in a jungle. Those interested can call 9062428521 to register.

It's hot on Bangla reality television now. Looking forward to more interesting bits on the shows and more.
Posted by Anirban Halder at 6:57 PM No comments:

Storm over the mystery pages

The extra-sensational story by Indranil Roy on Patrika (the Saturday supplement of Ananda Bazar Patrika) on 5th February has surely made the audience of Bangla meaningful cinema sit up and take notice, especially those who watched and liked Autograph. The story clearly hints at a suspicious resemblance of the script of Srijit’s new film, a thriller about a serial killer, to a script penned by noted film journalist Pratim D Gupta.

Those who follow Pratim may know about his script-writing, and an aspiration to make films one day. As per the story in Patrika Pratim penned a similar script years back and have been trying to make it into a film thereafter. In his script the killer’s victims are from the film industry. Pratim had even spoken to Rituparno Ghosh long back to make him act in a character from the film industry. As per Indranil’s story Rituparno noticed the similarities between the scripts after he heard Srijit’s. Prosenjit is playing one of the lead characters, of a police officer, in Srijit’s film. And he is one who has heard both scripts. He reportedly denied hearing Pratim’s script in full and maintained that he didn’t notice any similarity between Srijit’s script and whatever he heard from Pratim’s.

Pratim is obviously hurt, and refused a patch-up appeal from Srijit over phone. He might contemplate legal action if it is true that it’s his script that Srijit is going to film, despite clever changes as reported. The story also informs that one of such changes was shifting the victims from the film industry to the world of music, and Anjan Dutta was approached by Srijit to play such a character, but he refused because of the controversy.

The action has obviously spread to Facebook, where Roopa Ganguly has put up a sarcastic remark on her wall and rubbished the story in Patrika in Srijit’s favour, and also wondered how without proper evidence such a story can come up in a paper of Ananda Bazar Patrika’s repute. Srijit has commented in response to to his fan’s comments on the social networking site that he will take his stance when it’s time. Pratim has poured in his heart about his dream script having got hijacked by someone. Director Aniket Chattopadhyay, basking in the glory of ‘Bye Bye Bankok’, his January ’11 success, has pledged his support to Pratim.

Will be keen to follow the developments, and keep you posted. Watch this space.
Posted by Anirban Halder at 10:24 AM No comments:

Came across this promo of Chalo Paltai on Facebook. It's an under-production film from Venkatesh Films, directed by Haranath Chakraborty, starring Prosenjit and Mouli Ganguly, besides child actors Tathoi and a new boy. The music is by Anupam Roy of Autograph fame. Apparently the theme is today's education system and how it prevents students from pursuing their non-academic dreams and aspirations. Prosenjit plays the father of a young boy who dreams of becoming a successful cricketer. Though the film seems to be addressing the masses in terms of script and storytelling, the plot is indeed refreshing and contemporary. Will look forward to this film, releasing March.
Posted by Anirban Halder at 11:26 AM No comments: