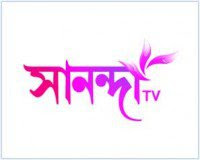 Was keen to check out the first day (that was yesterday) of the new baby in the Bengali GEC circuit from the house of the mighty Anandabazar Patrika - Sananda TV.

Had intended to catch only Pralay Aschhe - one of the 6 daily soaps, directed and produced by Raj Chakraborty. Was impressed with the production value. Shot on a RED camera used in contemporary cinema, the frames looked like a movie, as promised by Raj. Liked Paran Bandopadhyay (he plays an upright and witty teacher) the most. Supriyo Dutta plays an evil politician, the kind of character he is pro at. The first episode showed a murder by local anti socials in a Kolkata locality modelled on the Rajib Das murder in Barasat in February 2011. Am keen to check out Abir Chatterjee's smart cop act in the next episodes.
Posted by Anirban Halder at 9:24 AM No comments:

Delhi Belly, Ichchhe, Zindagi Na Milegi Dobara.....the cinephile in me is spoilt for choice this weekend.

Ichchhe is being raved about by people from the industry. Aniket Chattopadhyay recommended it to me last night, and now I see Anindya Chattopadhyay's appreciative wall post on Facebook highlighting Sohini Sengupta's sterling performance in the film. We really missed Sohini on big screen after her memorable act as Khuku in Aparna Sen's Paromitar Ekdin in 2000.

Icche is based on a Suchitra Bhattacharya story about a possesive and ambitious mother and her son (played by Sohini and newcomer Samadarshi respectively) and directed by Nandita Roy and debutant Shiboprosad Mukherjee. It has music by Surojit Chatterjee of Bhumi and and an exciting line-up of lead singers from Bangla bands who've sung solos in the film: Rupam (of Fossils), Sidhu (of Cactus), Subhojit (of Lakkhichhara), Anindya Chattopadhyay (of Chandrabindoo) and Anusheh Anadil (of 'Bangla' band in Bangladesh). Those who want to dig deeper, visit the movie's Facebook page and website.
Posted by Anirban Halder at 12:27 PM No comments:

What makes the film more interesting is that it is directed by actress-director Aparna Sen, who has been a lead actress of that era, and is playing the aged Mrinalaini - the title role (While Konkona Sen Sharma, her daughter, plays the younger Mrinalini).

Am personally curious to check out Kaushik Sen, who has played a Tamil director in the film in a reportedly standout performance. Kaushik, though highly deserving, has been largely overlooked in Bangla cinema so far, with only a few good films in his record, despite proving his worth sustainably in theatre and television.

Am also keen to listen to its music (by Debajyoti Mishra), with a friend having predicted that the song 'Aami achhi je tomar opekkhay saradin' is set to be a chartbuster.
Posted by Anirban Halder at 9:34 AM No comments: 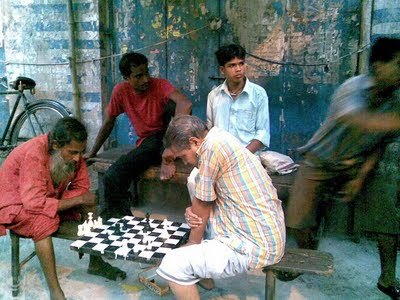 A retired Kolkatan engaged in a passionate game of chess on the sidewalk. Shot in a locality in North Kolkata where it is a typical pastime.

Picture courtesy : Shreyas Surya DasGupta, who loves to shoot the city in its various moods.
Posted by Anirban Halder at 9:10 AM No comments:

It was pleasantly surprising to see super prompt action on the new government's decision spelt out by KMC : Pull down all the hoardings from BBD Bag to Park Street. The objective was something long-cherished by passionate Kolkatans - To be able to relish the Kolkata heritage blocked by countless hoardings of all shapes and sizes creating intense visual pollution for long. On the first day itself (that's yesterday) several hoardings were pulled down by the respective agencies on an overdrive.

Thumbs up to the new state government for the determined step towards a more beautiful Kolkata that we all can be proud of.
Posted by Anirban Halder at 10:34 AM No comments: 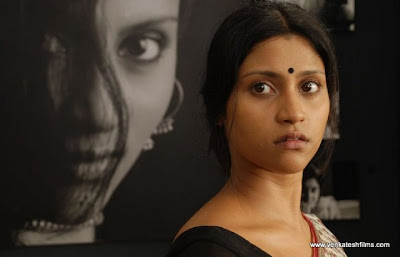 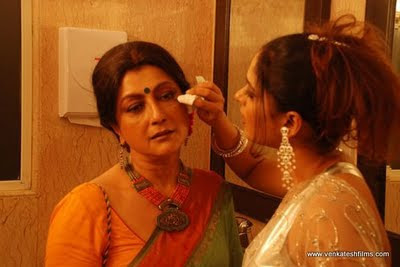 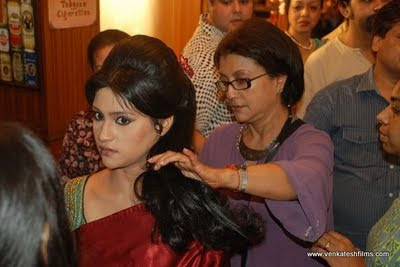 It felt good to know that the eagerly-awaited Iti Mrinalini starring Aparna Sen, Konkona Sen Sharma and Priyangshu Chatterjee, directed by Aparna, is finally releasing on July 29. It gave a painfully long wait to the cinefiles in the city. The movie will also release in Hindi.

The last picture shows the director-acress and her actress daughter in the shoot.
Posted by Anirban Halder at 10:47 AM No comments: