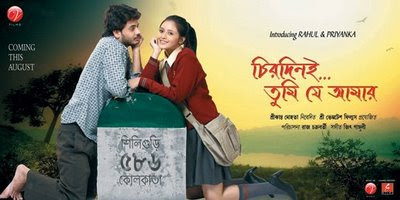 When this poster was released, it indeed generated some curiosity. It was indeed a different-looking, smart Bengali film poster by mainstream standards and the focus being on the young pair, the heroine clearly in her teens.

But nobody had an inkling of what a first-time director from television (Raj Chakraborty, of 'Mirakkel' fame and some telefilms behind him) and a debutant pair (Rahul aka Arunodoy and Priyanka), again from television (They played siblings in a Rabi Ojha serial!!), can do. The publicity campaign didn't have big hoardings (at least in Kolkata) typical of a Venkatesh Films production. The city was splashed with posters with the above creative and maybe one more. The clever PR campaign focused on the fact that the story was inspired by the real life tragic love story of Rizwanur Rehman-Priyanka Todi that kept media busy a year back. All this did the trick. The movie opened unexpectedly big on 15 August 2008 and....is still going strong on in its first run to have become the first blockbuster of this year. Let me share with you what I liked in the movie extracted from my mail that was carried in t2, the daily tabloid with The Telegraph.

1. The refreshing publicity design by Gautam Barat...
2. The lead cast are two fresh faces who looked the characters.
3. The music by Jeet Ganguly. It rocks and that is quite unfamiliar of Bengali playback music. It has been lapped up by the youth.
4. The strong performance of Rahul. He's made the best of his big break. He definitely doesn't look like a conventional hero, but was cast due to suitability and acting skill.
5. Raj's treatment (which was quite realistic on mainstream standards) to a familiar storyline and the twist at the end that shook many. It requires guts to end a love story like that. Raj has mixed the masala really well to come up with a quality mainstream product.
6. The youth connect. The movie has worked big time, for a change, for the youth- both rural and urban. I've seen a long queue majorly made by young people at Mitra cinema on Dashami, which was its 8th week.
7. The performances by an all-television supporting cast. It only drives home what television actors, often overlooked in Tollygunge, can bring to the table.
8. The cinematography by PB Chaki. I've said it before also, we have enough top quality technicians in Tollygunge not to look elsewhere (Read South).
9. Last but not the least- a much realistic (eg. the toilet graphiti) and entertaining depiction of a bachelor's mess powered by some top-notch performances.

The movie that looks like having been made with a budget well below Rs 1 crore is making several crores at box office as the producer is laughing all the way to the bank.

Kudos to Raj Chakraborty, for finally thinking different with a strong script and execution in Bengali mainstream and Venkatesh Films for believing in Raj. We the Bengali film audience now has a director in mainstream who can make better mainstream cinema, appeal to the youth and smash the rural-urban divide.

Raj is already into his next called Challenge with Dev (with two hits in the last two years behind him at the beginning of his career) and Subhashree (the girl who broke into the big league with Haranath Chakraborty's successful 'Bazimaat' earlier this year after winning the talent hunt for a heroine by top Bengali film mag Anandalok). It will be a sleek action-meets-romance movie shot by Somak Mukhopadhyay, the cinematographer of Subhash Ghai's last film 'Black & White' and produced by Venkatesh Films.

Seemingly inspired by the Chirodini... Venkatesh has also started Jackpot by Kaushik Ganguly, an on-the-road refreshing love story with Rahul-Sohini (back after her impressive 'Bow Barracks Forever' act) and Hiran-Koel. Looks like Bengali mainstream is on its way to maturity........finally, powered by new-age directors.
Posted by Anirban Halder at 6:49 PM 2 comments:

While I find most RJs at private radio stations not playing their natural self, some being plain awful, including the best in the business- Mir of Radio Mirchi, there is one refreshingly different- Riddhi of Big FM. He's absolutely natural on air (and off it too, having encountered him in events) and connects well with his audience. No wonder his show 'Masti Ki Pathsala' is quite popular.

In events I've seen him do fillers between items where he mimics his office colleagues (not fellow RJs), sometimes they being present/ called on-stage, while the audience is in splits. A quality entertianer indeed.
Posted by Anirban Halder at 9:17 PM No comments:

Email ThisBlogThis!Share to TwitterShare to FacebookShare to Pinterest
Labels: Media

Great to be back!!

Dear readers
I stopped blogging for a couple of reasons about a year back. It coincided with my switching job and that was one of the reasons.

Like some readers who were missing new posts on KC, I did it too, very very much. After all, it is my baby. But I thought like every good thing has a shelf life, so has KC.

But it kept coming back to my mind. And I was feeling the urge to blog again very recently.

So KC is going alive again. I must say I'm overwhelmed to see the enormous no. of readers KC has received over the last one year without a single new post. Now I know better than ever how much KC matters among lakhs of blogs worldwide.

Just one thing. KC now onwards, thanks to my present life, will be informal. There will be more small posts, may be more photographs (because photos say a lot), more humour (incl. 'tongue-in-cheek', my favourite genre), less talk on politics, much more on entertainment, especially cinema (where I am now, careerwise). It won't aim to be as informative as it was. One thing for sure- it will always seek to connect with its readers.