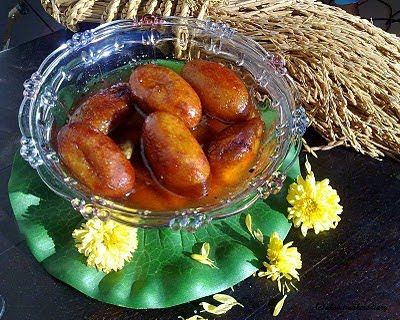 Albeit late, was fortunate to taste the season's first yummy puli (The dessert prepared at this time of the year at Bengali homes) today. It was Ranga alur puli (See picture), a distinct, syrupy variant of the famous puli, made of sweet potato (Ranga alu) brought in by boss (Cooked by his mother) to indulge his team in the office. To put it simply, as I shared with the colleagues too, no one can eat just one. I ate two and restrained myself from going for more.
Posted by Anirban Halder at 4:37 PM No comments:

Checked out the revamped cafeteria renamed Jan Ahaar at Sealdah station today for breakfast. I was curious for long to see the menu and the food at promised low prices for the masses. The breakfast menu has veg sandwich, aloo vada, sada dosa, masala dosa, veg and non-veg breakfast combos etc. The lunch menu has vegetable chowmein with Schezwan sauce, plain rice options in veg and non-veg (fish and chicken) combos and regular beverages. The overall prices are cheap. The environment is clean and sports a contemporary design. It operates on self-service.

Tried the  vegetable chowmein with Schezwan sauce. At Rs 19 the portion size was okay, so was the taste. Liked the sauce. The decent-sized masala dosa, with the right quantity of sambhar and chutney comes at Rs 14 only. Will have to try it next. Wish to come back once in a while for a hygienic and comfortable evening refreshment.
Posted by Anirban Halder at 10:43 AM No comments: 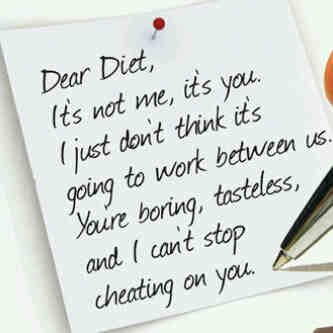 Came across this interesting photo tweet from Raima Sen! In line with her self-description on her Twitter profile that includes 'Foodie' and past confession on her undying love for food (that includes junk food with a capital 'J') and refusal to go on a diet, rather working off the excess.
Posted by Anirban Halder at 11:51 AM No comments: 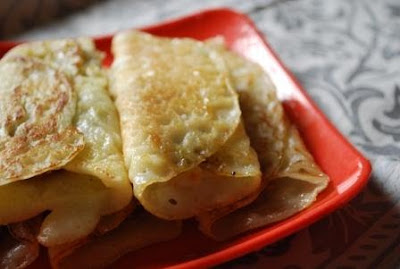 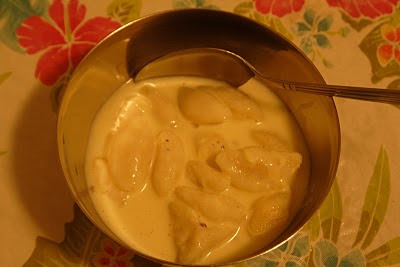 Yesterday and today are special days in the calendar for making two of Bengali's favourite desserts : Pithe and Puli. An interesting tweet from Dev says he loves 'Pitha', but unfortunately there's nobody around to make it for him now. Anybody who wishes to volunteer are welcome and the stuff is to be dispatched to his South City flat.

So all Dev fans reading this, get into action! You know how to impress your matinee idol. Girls specially, as the act will be more credible!
Posted by Anirban Halder at 11:27 AM No comments:

It's a tough time. The weather is biting and onions are making people cry. This winter is hitting the Kolkatans (Not familiar with the temperature touching 10 degrees and intending to dip further) below the belt. And the onion price is throwing a tough challenge for the daily shopper to keep within the budget. The kitchen queens are forced to innovate. Onions are vanishing from mashla muri, alu kabli, rolls. Piyaji, a favoured delicacy in such cold days, is getting discouragingly smaller.
Posted by Anirban Halder at 11:05 AM No comments:

The Japanese Wife, Byomkesh Bakshi, Shukno Lanka, Autograph, Moner Manush, Gorosthane Sabdhan....and finally a brilliant Arekti Premer Golpo to wind up 2010. The year was peppered with cinema that delighted sensible audience. Teens to octogenarians visited thetares, including many who returned after a long hiatus.

Though their success may not be worth writing home about, Abohoman, Mahanagar@Kolkata, Clerk, 033, Natobor Not Out, Banshiwala and Sthaniya Sangbad impressed many. And the first two made us proud again with national awards that we kept on counting.

Priya Cinema, which always successfully balances between Bollywood and Tollygunge in its 5-6 shows a day, couldn't accomodate any Hindi movie since November, such was the number and box office wonder of the Bengali releases. And Arijit Dutta, owner of the largest single-screen theatre chain in Bengal with Priya Cinema as the flagship, is not complaining.

2010 was easily the best year for Bangla alternative cinema in a long, long time. Both in terms of content, genre and box office success.

Mainstream did well as usual, with successes like Balo Na Tumi Amaar, Wanted, Amanush, Le Chhakka, Josh, Dui Prithibi, Kellafate and Sedin Dekha Hoyechhilo which did a superb finishing job in December. Le Chhakka and Dui Prithibi, both by Raj Chakraborty, one of the top league names, brought in a whiff of freshness.

2011 looks set to take off from where 2010 left, with Bedeni, Iti Mrinalini, Bye Bye Bangkok and Takhan Teish hitting the screens back to back in January and many more interesting stuff in the pipeline.
Posted by Anirban Halder at 10:48 AM 1 comment: 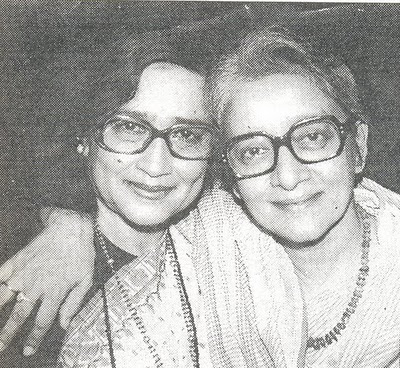 She is no more. It's end of an era. We have grown up equating her name with Rabindrasangeet and have always been in awe of her voice and dignified appearance.

The picture shows her (right) with her friend and another legendary Rabindrasangeet singer Kanika Bandopadhyay, who passed away in 2000.