It is that time of the year when Italy woos gastronomes across the globe with its cuisine. The World Week of Italian Cuisine is celebrated in the countries where Italy has a consular presence. This year’s is the second edition (the first one was known as The First Week of Italian Cuisine and you may see the post on it on this blog here)

My sincere gratitude to the honourable consululate general Mr Damiano Francovigh for the invitation to the inaugural party at the consulate like last November.

I reached the Italian consulate in Alipore around 7.30 pm and found the Consulate General and his team greeting the guests at the entrance. The team found me out on the guest list and told me to go in. The party was in full swing at the large lawn. The guest list had the creme de la creme of Kolkata.

Here’s what I liked:
I started from the very first stall- HHI. The smoked salmon was good. It was served in normal temperature and had a subtle taste with some creaminess. The Lamb Pepperoni (Thin, round slices) was good too.


The Consulate General addressed the guests at this juncture and said that the week was a celebration of Italian cuisine all over the world to raise awareness about it. He named the hotels and the chefs who were present and informed that the same food would be available in the hotels over the following fortnight.


The drinks counter was serving a fine selection of wines. Since I’m not a wine person, I chose to skip it.

Moved to the Taj Bengal stall and tried the lamb stew. They served it with a pulao. The stew bowled me over! Its taste was richer than a stew yet not spicy. The tender, well-marinated lamb chunks cooked with the vegetables was an ideal dish for the pleasant autumn evening. I have never been attracted to risotto but I liked the vegetable verson and the seafood risotto was lovely (with tiny chunks of seafood and made with stock). Both were being cooked on the spot and served right from the oven. 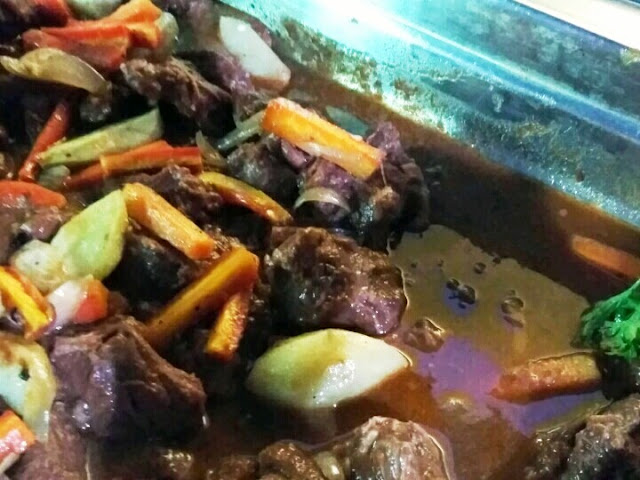 I met Chef Vittorio Greco at the ITC Sonar stall and told him that I had loved his poached fish last year in the same event (you can read about it in the post on this blog here). He said he remembered me (!) and served me his fish preparation of this year. Personally speaking, it was not bad and was subtly flavoured but that it was cooked with tomato, thus didn't appeal to my palate.

I met food blogger friends Indrajit Lahiri and Debjani Chatterjee Alam. Indrajit showed us his discovery- a fatty pork dish from the ITC Sonar stall. I had a spoon of it and went back to the stall just for it. The baked pork with almost a 50:50 fat to meat ratio in some cuts (and I precisely picked the fatty cut) was a delight and chef Greco’s magic made it the showstopper of the evening for me. The poached fish I talked about was the best dish for me in last year’s edition.


The chicken liver puree at the Novotel’s stall was a bit bitter to start with, but its rich flavour took over soon. It was one of the new types of dish discovered.

Another puree caught my fancy. None of  the chicken dishes tasted thus far had scored with me (like Chicken Bon Bon with Onion Sauce, Chicken ball with parmesan) but the chicken breast on top of a cauliflower puree at the Hyatt stall was made flavoursome for the delicious puree. 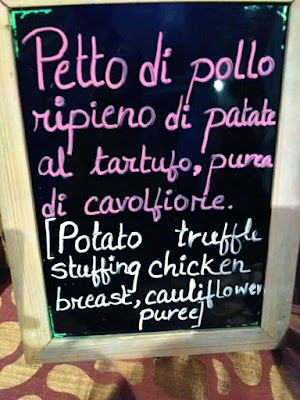 I wrapped up the night with the the tiramisu from the Oberoi Grand stall which served only desserts. The tiramisu didn't turn out well. I missed the cheesy flavours. But the dense chocolate cake that I took just before made up for a sweet ending.

Posted by Anirban Halder at 8:20 PM No comments: