Love on a banana leaf!

In the age where we indulge in the choicest Bengali food in fancy Bengali cuisine restaurants, some eateries, tucked into the lanes and alleys of the old Kolkata, have been silently serving lipsmacking traditional food for ages. Known as pice hotels, they serve good old basic meals, minus any frills, to the common man at honest prices in a humble ambience.

According to Arun Deb who runs Tarun Niketan, the popular pice hotel near Rashbehari, which is more than hundred years old, ‘Pice hotel’ means a customer needs to pay for everything other than the steel plate, the salt served on it and the water in stainless steel tumbler. Even a piece of banana leaf, if a customer demands getting the food served on it (as it is done traditionally), has a small price. ‘Paisa’ or ‘Pice’ in English was the smallest currency in the British era when such eateries possibly started. So, it meant, one had to pay in pice for everything in those eateries and thus these places started being known as ‘Pice hotel’.

Without this kind of eateries, one’s search for Bengali food in Kolkata will remain incomplete and if a visitor wants to eat Bengali food in real local style, the destination is a pice hotel, not a fancy Bengali cuisine restaurant. Also, pice hotels are part of the soul of Kolkata. So if you wish to feel it, you may go to one.

I first read about Hotel Sidheshwari Ashram in my Facebook food group Calcutta Foodies Club in an extensive post, then in friends’ blog posts and Instagram posts. So, it was on the wishlist for a long time. Finally it got ticked as I visited this ninety two-year old popular pice hotel on a recent Saturday for lunch with two enthusiastic colleagues. What I felt after the meal is encapsulated in the opening line.

It’s located in Janbazar in central Kolkata. If you walk down SN Banerjee from from KMC/ Elite cinema bus stop towards Sealdah, after a few minutes, you shall see Hotel Aura on the right in a four-point crossing. Turn right and keep an eye on the left. After a few shops, mostly selling spices (it’s a spice market), you shall find its narrow entrance. Go straight to the first floor. 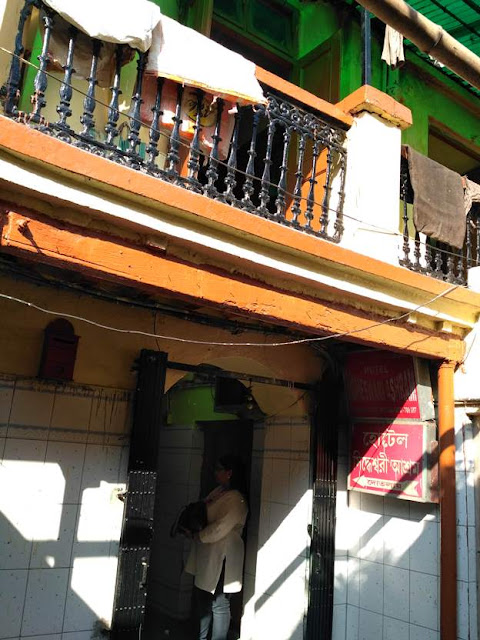 What will welcome you, much to your surprise (if you aren’t familiar to a pice hotel), is the menu board. Yes, prices are written in chalk as per availability of dishes which is dependent on the availability of the main ingredients and their prices on a given day. It means if a particular fish wasn’t available in the market that day, or its price had shot up much, the price of its dish would ke kept blank on the board. So, don’t make the mistake of asking for the menu card. It’s all there on the board only. It’s a place for the common man on the road. Customers sit on benches, not chairs, and share tables with rank strangers. Don’t be surprised if you find a cat staring at your fish from the window and don’t bother either.

I much preferred to sit right there as for me it was not just the food but the ambience to soak in, but on that day we had a lady among us and she wasn’t feeling comfortable sharing the table with a stranger, so we moved to the small AC section (seating ten people) which they have started in recent years for ‘sophisticated’ customers.They charge 20% extra on the bill for dining there, which we found to be fair given the down-to-earth prices. 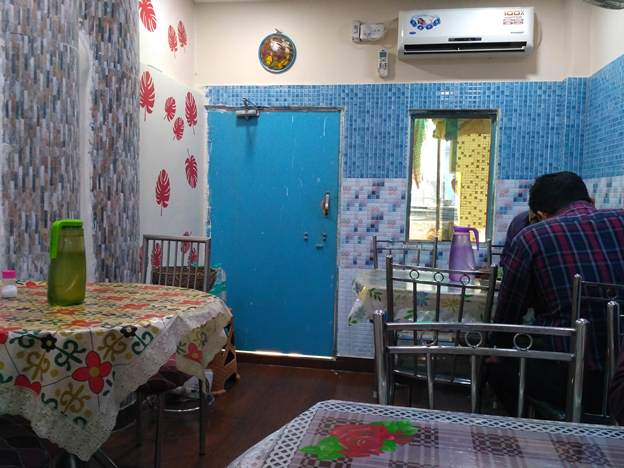 We ordered fine rice, thick dal (they have basic versions of both at lower prices but don’t go for them), jhuri alubhaja (fried, crunchy potato slivers) and Rui Kawsha (Rohu fish curry in thick gravy) for all. Mocha Chingdi and mango chutney were also ordered which we shared. The food was served on a banana leaf in traditional Bengali style and water was served in ‘bhnaars’ (earthen cup). 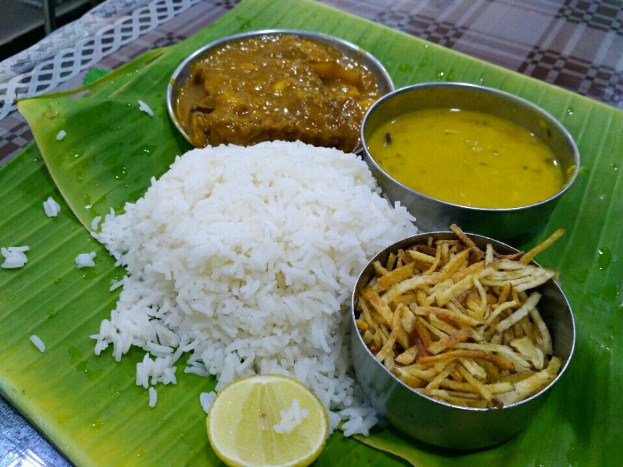 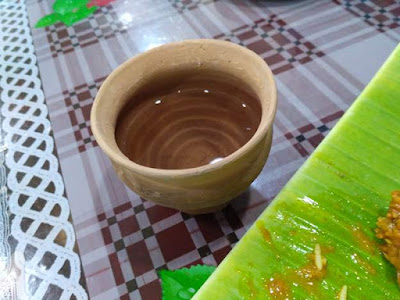 The food was finger-licking good! Prices were down-to-earth and some items were surprisingly cheap, like the dal and alu bhaja. The portion sizes were good- the alu bhaja will suffice for two, so will be the Mocha Chingdi. The fish was a ‘peti’ for me (stomach- the most covetable serving of fish) and man, it was a jaw-dropping size (see the picture below). The common order (Rice, dal, alubhaja and the fish dish) cost just Rs 91 each approximately (other than the 20% load for AC section).

After the meal is over, don’t ask for the bill. Head for the cash counter where the waiting staff will recall the dishes ordered and the cashier will put the prices of each in boxes on a sheet of paper on a clipboard, then sum up and tell you the amount. You can tip the service staff right there.

Unlike a pice hotel, it is open in the evening too. And it’s open all days a year.

It's surely a hidden gem and I have to go back there to explore more. Certainly for the mutton curry which fetches many good words.

I hope to visit some more pice hotels on my wishlist soon which will see the 'The Kolkata pice hotel trail' going.

Posted by Anirban Halder at 7:46 PM