Recent Bengali films, except one or two, have not explored a subject or genre which is a  marked departure from the current stream of urban films. Thanks to Kamaleshwar we have one which deals with a subject in the adult territory.

It’s the story of an eminent author called Dhruba Lahiri (Prosenjit) who used to write novels with the pseudonym Nirbed Lahiri. Nirbed had a lustful streak and a way with women. He gave up writing following a disastrous incident twenty years back and left Kolkata. Since then he has been living a life of solitude in a bungalow on a sea beach in a tranquil hamlet called Koelphuli. A young unwed couple on a vacation discovers him by chance and get invited into his bungalow. Nirbed narrates them- Rishav (Ronodeep) and Sohag (Tridha) who happened to be his readers, the story of his life, love and lust which he has been penning in his autobiography all this while, through the evening and the next day over good food cooked by himself. He revealed his secret affair with Antara (Paoli), one of his charmed readers, who he fell in love with at the first sight in a party where she came with her husband who was a close friend of Srijita, Nirbed’s wife (Raima). After an initial sexual encounter with Antara initiated by Nirbed, he seeks sexual favours in return of a job he organizes for Alokesh (Rahul), Antara’s husband when he needed it the most. The story traces the outcome of their affair for the two families.

Khawto delves into the physicality of love like no other Bengali film has done in recent years. Nirbed is shown to be a man who loves both his wife and his Antara, who becomes his muse. In his own words, he makes love like an explorer and that’s a way of life for him, nothing to feel guilty about. He cares two hoots about societal conventions and norms. Antara is attracted to him too after the initial dilemma. Writing and making such a film needs guts and Kamaleshwar gets the due credit for that. The lovemaking scenes look better and real thanks to the uninhibitedness shown by the actors (Prosenjit-Paoli and Ronodeep-Tridha). There is visually pleasing bare male body in Bangla cinema, finally. 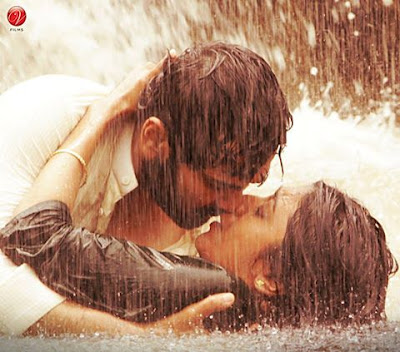 This will go down as one of Prosenjit’s best performances. He is splendid as the suave Nirbed Lahiri- young or old. His attraction as a young womanizing author is effortless yet fatal and he hasn’t probably looked more strikingly appealing in any other movie in recent times. His screen presence as both young and old owes significantly the way his look was deisgned. The designer has created a stylish look for Nirbed by giving the young age a lot of gilets and the old age a wardrobe of relaxed westernwear. 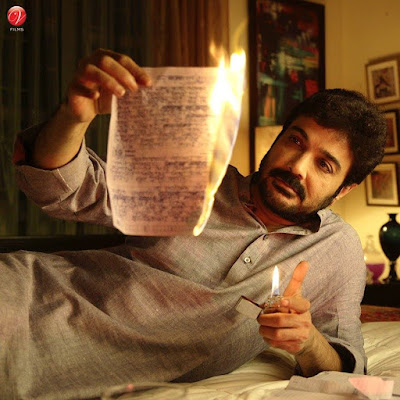 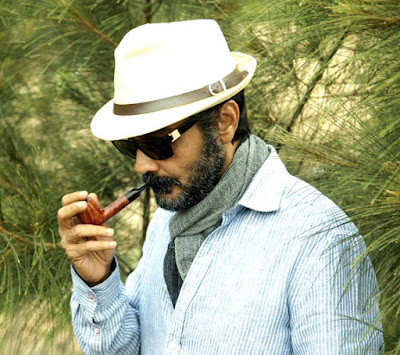 Paoli is brilliant too as Antara who despite being good in academics and coming from a respectable background, fell for and married Alokesh who is a simple man looking for small joys in life. Yet, after she met Nirbed, they got on like a house on fire. Paoli’s classic face, sonorous voice and acting acumen make her the kind of woman who could sweep her favourite author off his feet. 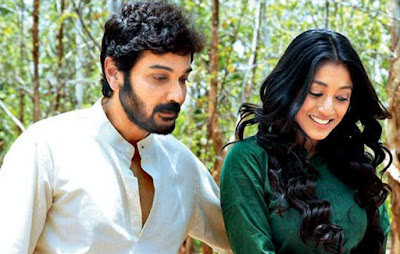 Raima is nice as Srijita. She has got little scope to act before the end of her track though. But she was brilliant at the end after she caught her husband cheating on her, especially the confrontation scene.

Ronodeep and Tridha are well cast as the gen Y couple who believe in living life to the brim. Ronodeep is a good actor as we have seen especially in Dutta vs Dutta and he aptly brings out the vibes of the fun-loving Rishav who enjoys the sexual freedom with his girl. The other side of his personality that comes at the end is also competently portrayed. Tridha looks cool in trendy clothes and she is good as Sohag given the limited scope.

Mishka Halim as Srijita and Alokesh’s college friend (who is now essaying the role of Gouri Devi in the Bengali television series Mahanayak) impresses in a small role. She acts as the voice of conscience which is not easy to portray. Anirban Bhattacharya provides comic relief in the bit role.

One point about Rahul- Does every director have to give him a bunch of witty and funny one-liners? He is getting stereotyped with this trait. This is high time he makes a note of it and avoids repeating it. He is otherwise convincing as Alokesh.

Soumik Halder’s camera and visual design lends the film the classy and sophisticated look that it needed. The abundant use of red-tinted frames and the shots of blood trickling on the written sheets in the narrative paired with the pulsating background music by the young Binit Ranjan Moitra help build the desired mood.

The editing by Rabi Ranjan Moitra is good. The flashback and the present blend seamlessly. I only thought the chain-smoking of Nirbed in the party scene could have been better edited.

Anupam scores the music but it’s just two songs of which Bhir thele which is written, composed and sung by him is pleasing to the ears. It has been used in bits and pieces in the film after the full version.

The film is not flawless, though. How can Nirbed, who lives in style and cooks world cuisine, be concerned about affording a three-star accommodation for a day? The scene where Alokesh shockingly discovers his wife in a passionate moment with Nirbed is not convincing too. The visual effect of the last scene is amateurish and ill-conceived and the climax could have been written better. The way it happens puts Rishav at high risk for suspicion despite the suicide note in place. However, the gliches don’t stick out like a sore thumb.

Picture are sourced from the Facebook pages of Shree Venkatesh Films (the production house) and Prosenjit.

If you liked reading the post, you may visit this blog's Facebook page (click on the link) and hit the 'Like' button to stay connected with the future updates on this blog and more on the page.
Posted by Anirban Halder at 7:19 PM