The American café bakery (with a French name) which started operating in December 2013 on the corner plot of made iconic by Music World, the music shop, has come quite a long way. It impressed Kolkatans with its oven-fresh baked goodies and a premium range of Continental foods which were compared to its famous next door neighbour Flury’s. Its USP was health delivered in its foods. The food was either baked or cooked, but not fried.

The chain was brought to by Avarna Jain, the daughter of Kolkata-based industrialist Sanjeev Goenka. She had developed a liking for this café when she was studying in the in 2007. The first café in was opened in in a few years from then.

As it was going to complete about two and a half years in the city, Au Bon Pain had reflected upon the journey and gone back to the drawing board to re-strategise and come back in a new avatar which can address the current likes and preferences of its core base of customers- the youth. The café re-opened in June after a closure of a month with some revamp in décor and a refreshed and streamlined menu.

I was invited to a blogger meet on a Saturday afternoon in June organized by the café to sample its new food menu. I was happy to accept the invite.

The first thing that caught my attention was the new offering of unlimited refill of tea. Nothing can be better for a city which loves its tea. One has to order a cup of tea by paying Rs 50 once. If the paper cup is retained, the refills come for free. And one can choose one or more variants from Elaichi Tea, Cinnamon Tea, Vanilla Tea, Black Tea and Green Tea. Go to the dispenser and fill the cup yourself.

One more interesting thing that I noticed was that one can try any soup (in a small cup) from the few options at the soup counter for making up the mind on which one to order. 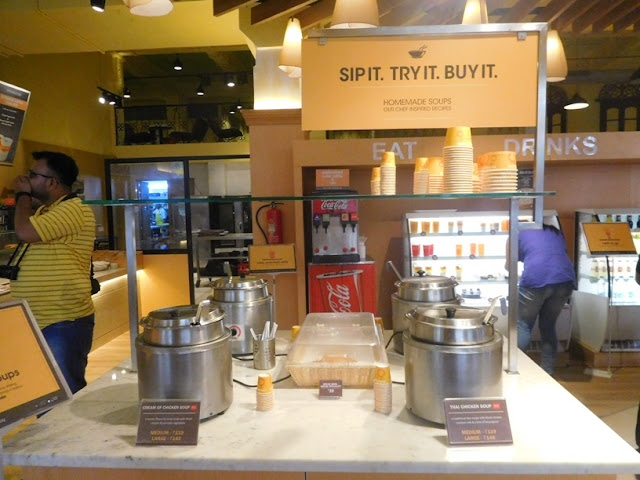 For those who like aerated drinks, there is an unlimited fountain refill at Rs 70. The condition is the same- retain the cup.

My first nibble was an Open Face Margherita (with chicken) from the hot sandwich section ordered by blogger friend Sumit Surai. A crunchy baguette topped with mozzarella and cheddar cheese, pesto sauce, onion, tomatoes and tiny chicken cubes makes itself the perfect comfort food. It comes at Rs 199.

I had taken a Banana and Yoghurt Cooler, a new item, but didn’t like it. Sumit told me that the and Papaya Cooler tasted better (another new item) thanks to the tang of orange.

Met blogger friend Debjani Chatterjee Alam and got introduced to bloggers Devpurna Talapatra and Urmi Ghosh. We dived into a deep discussion of our common interest- food- in no time.

My first order was sort of pre-decided. I had read up the menu on Zomato and wanted to sample the new introduction- Keema Kouign–Amann (pronounced as queen-a-mon) which was a puff with a chicken keema (Minced chicken) filling. The spicy keema inside the thick, crunchy puff brought pep to the gastronomic sojourn. This comes at Rs 79 for one and Rs 129 for two. Khurshid, who was attending the large group of bloggers, told me that unlike the past, they had done away with the happy hour offering of fifty percent off after 8o’ clock and had introduced such offers on select items. In line with that, the coolers mentioned before come at Rs 119 for a medium size and adding just Rs 10, you can upgrade to a large size. 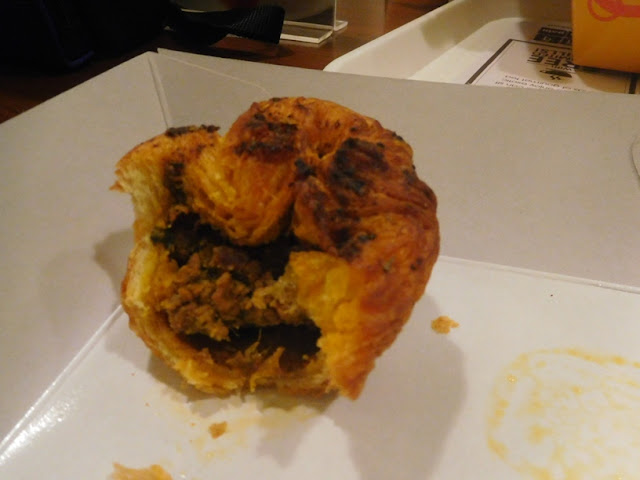 Ordered Chicken Keema Cone-wich next. It’s sandwich bread with a minced chicken filling rolled into a cone shape. This one was delicious too, mostly thanks to the rich filling of chipotle and onions mixed with a generous amount of mozzarella and cheddar cheese. One of it is for at Rs 109 and two are for Rs 179. 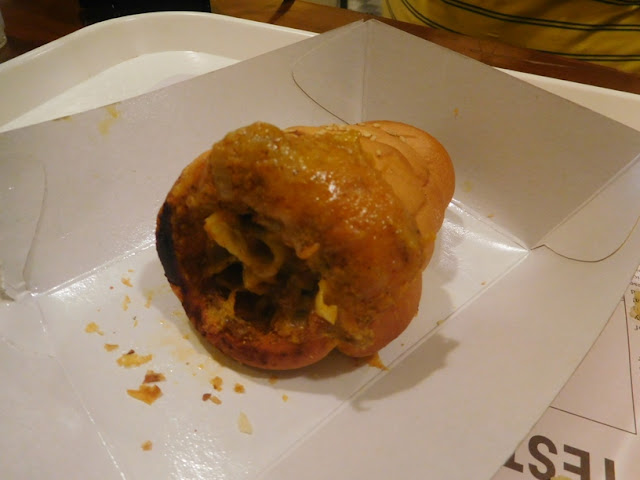 Both Keema Kouign–Amann and Chicken Keema Cone-wich are new entrants in the bakery section which has five more such introductions.

Au Bon Pain has refurbished the bakery section. Now it is better equipped than before and you can see dishes being baked all day thereby making fresh bakes always available for you. I felt like having a second drink and ordered a Classic Mojito (Medium- Rs 109 and large- Rs 119), which was good, and I liked it much for the infusion of herbs. 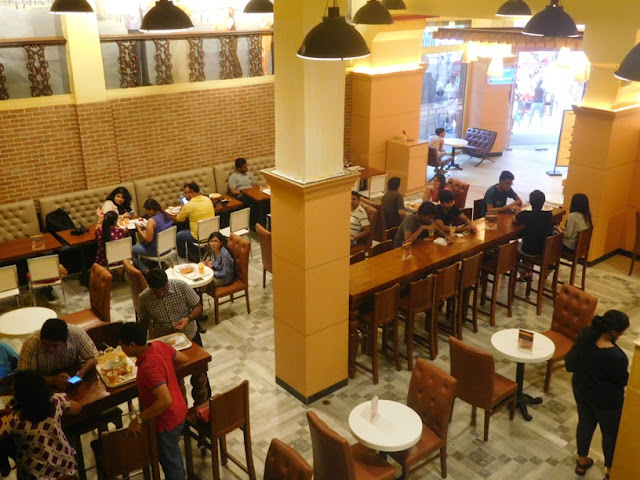 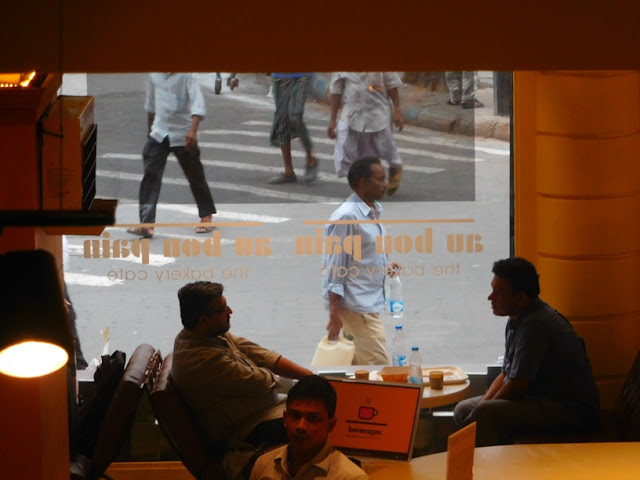 Au Bon Pain has introduced Rice Bowl as a proper meal option. There is Herb Rice with Chicken/ Tofu Thai Curry (at Rs 179/ 169). The tofu version was ordered at our table as the chicken version wasn’t available. None of us liked the taste. The herb rice had a smoky flavour but otherwise quite bland.

In the main course, the Arrabbiata Veggie Pasta with Chicken (Rs 249) was ordered and we all shared it. It tasted good thanks to the tangy and mildly hot Arrabbiata sauce and diced tomatoes. The garlic bread that comes on the side added to the experience.

We had ordered one more drink each. After some deliberation, I went for Frozen Mint Lemonade (Rs 149- medium, Rs 169- large). It was zesty and refreshing!

We wrapped up with a safe choice- walnut brownie (Rs 79). And though it didn’t look pleasing, as we all agreed, it tickled the taste buds easily. A nice, sweet ending of a hearty meal and session with like-minded folks.

All the prices mentioned are before taxes.

If you liked reading the post, you may visit this blog's Facebook page (click on the link) and hit the 'Like' button to stay connected with the future updates on this blog and more on the page.
Posted by Anirban Halder at 9:44 AM