Liked the just revealed poster of Ashchorjyo Prodeep, after the interesting teaser, shared in an earlier post (click here to read). It's Anik Dutta's next, set for a November release, after the landmark success of Bhooter Bhobishyot in 2012, and is a 'Story of a modern day Aladdin, set against the backdrop of contemporary consumer society' as the makers are putting it.
Posted by Anirban Halder at 9:30 PM 1 comment: Links to this post

It was a washed out Nabami evening (13.10.13), but it couldn't do much to puncture the pandal-hopping spirit of Kolkatans! Went to south Kolkata proper with family and regretted it because of the awful weather. But came back with memories of some very creative Pujas, where Badamtala Ashar Sangha tops the list.

Not for the Tanishq jewellery reportedly worth crores on display, it's the sheer beauty of the idol and the overall presentation that gets a thumbs up. Worth the wait of more than half an hour (on Ashtami, 12.10.13) at countless points to the pandal.

Posted by Anirban Halder at 4:47 AM No comments: Links to this post 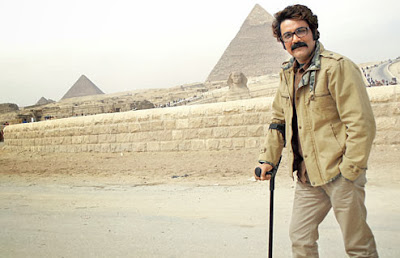 I read the novel long back in the Anandamela Puja number. I don't remember the story. A cine file friend said that it was not the kind of Kakababu story to be filmed.

Well, after watching the keenly awaited Mishawr Rawhoshyo, I do agree with him. It is one of the reasons why the movie lacks pace, especially in the first half. The length of 2 hours and 30 minutes could be shorter by at least 20 minutes.

Kakababu looks and conducts himself the way he should, in 2013. He uses tablet PC, high end mobile phone and tweets, all convincingly. Prosenjit looks good in the contemporary get-up. Only the hair colour, I felt, didn't gel with the persona of Kakababu. If covering grey hair was the reason for the character, I would say that Raja Roychoudhury would have looked better with salt n pepper hair.

Prosenjit, acting-wise, is decent in most parts, especially the silent moments. His Kakababu is smart yes, and has the right dose of gravity, bu talks a little too much for effect and reacts (verbally) a little sooner, often resulting in not getting the comic timing right. The cerebrality of Kakababu could've been better developed.

I couldn't like Devdan's Santu, one of the key reasons being his affected Bengali accent. The age (on the higher side), is fine, but all the contemporary changes are not convincing. The innocence is missing too.

The songs are mostly forced, though well-written, composed and sung. The Delhi song was unnecessary. The fast motion used in showcasing Delhi also didn't work.

The movie has been shot well. The visual design, especially in the Egypt portion, is outstanding. It doesn't feel like a Bengali movie at all in this portion.

One of the high points of the movie is Indraneil. His Hani Alkadi, physically and vocally, with the ruthlessness and conviction, is spot on. And he outdoes Prosenjit, to be honest. The characterization demanded an actor like him and he does full justice to it. What also deserves a mention is weaving in his character in the current political scenario of Egypt.

Definitely a watch for all the Kakababu fans, but do set your expectation at a moderate level.

Posted by Anirban Halder at 5:02 AM No comments: Links to this post