I first read about this new kid on the block in Chinese cuisine on Poorna’s blog. She had visited it with friends and wrote a review. Later, I read about it in Times of India and a few other places. Like many, I knew it made good food and had a tie-up with the popular and modest eatery from old Chinatown of Kolkata- Tung Nam. So the perception was that all the popular dishes of Tung Nam and more were being served in a better ambiance in south Kolkata (near Southern Avenue).

I was later clarified by Prithvish Chakravarti, the owner of Tak Heng, on Facebook. He was on my friend list for some time and I was chatting with him about the place one evening. He informed that Tak Heng had no association with Tung Nam. It never had. It only so happened that he had requested his good friend Michael who hails from the family that runs Tung Nam to operate the kitchen of Tak Heng in the initial days and train the kitchen staff, which Michael did. As a result, some of the best dishes of Tung Nam is available here as part of a menu which serves a wide range of Oriental food.

He also informed that in Tak Heng, no MSG and not much of additives and colours were used as well, unlike most Chinese eateries in the city. So, the taste of food in Tak Heng was not sharp, rather subtle. I am much interested in Chinese food where MSG (Monosodium Glutamate, popularly known as ajino moto) is not used as there is a lot of negative reports about its harmful effects. It is what makes you thirsty after a hearty Chinese meal if not used in moderation. Many will argue that MSG enhances the flavour of food and getting rid of it makes it less palatable, but that’s actually a myth.

That chat ended with an invitation to Tak Heng. So, sometime back, I I turned up one evening with blogger friend Indrajit Lahiri. It is located on , near Thyagaraj Hall. I found it by walking down from the end of Jugal’s sweet shop on and taking the last left hand turn before .

We were welcomed by Prithvish who is an entrepreneur and into manufacturing machines and a foodie by passion. It’s the common interest of food that he shares with his wife that resulted in Tak Heng last year.

Like it is a trend in south Kolkata, a part of the ground floor of a house has been converted into the restaurant. The erstwhile leaving room is now the dining area which seats about twenty six persons. The décor is minimalistic with Chinese motifs and the seating is casual. 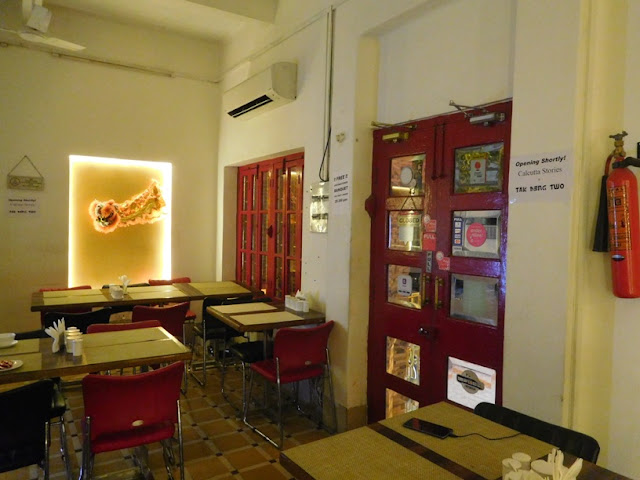 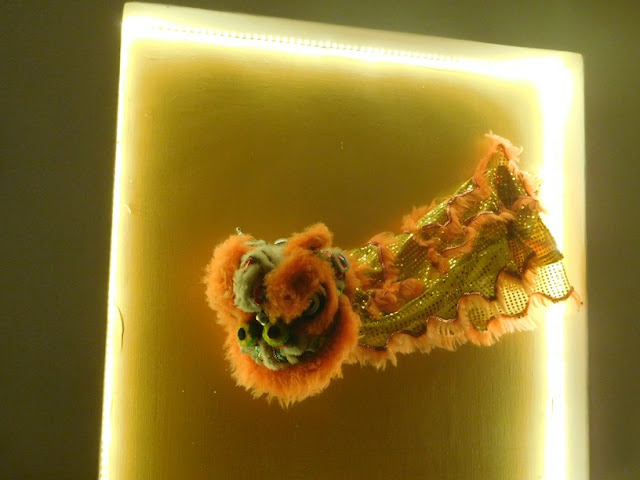 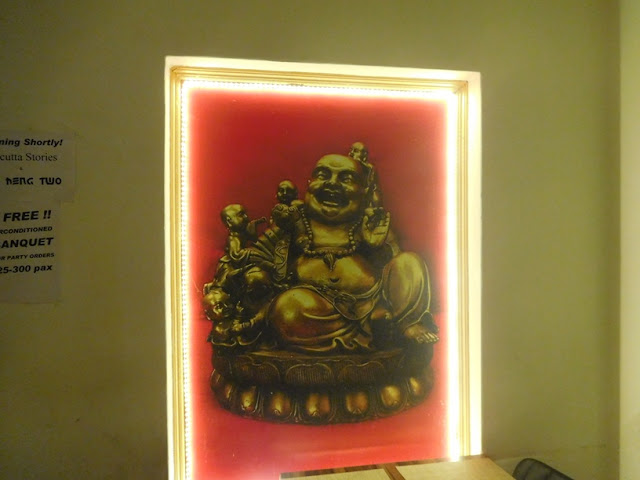 Our sojourn kicked off with chimney soup. Now, this is a rare delicacy in the Chinese foodscape of the city. I had known only one restaurant serving it- Eau Chew. It’s a flavourful clear soup that can have a variety of chicken/fish/ seafood and vegetables served in a large Mongolian hotpot. Ours was Chef’s Special Chimney Soup containing prawn, crab, squid, fish, mushroom, veggies and chicken as well. The natural flavours of all the ingredients blended beautifully to create a sublime broth that brought a rare pep before a meal. A sure recommendation for those who love seafood and appreciate natural flavours. This comes in a portion for four persons at Rs 900 plus taxes. Paying the steep price won’t be a regret. 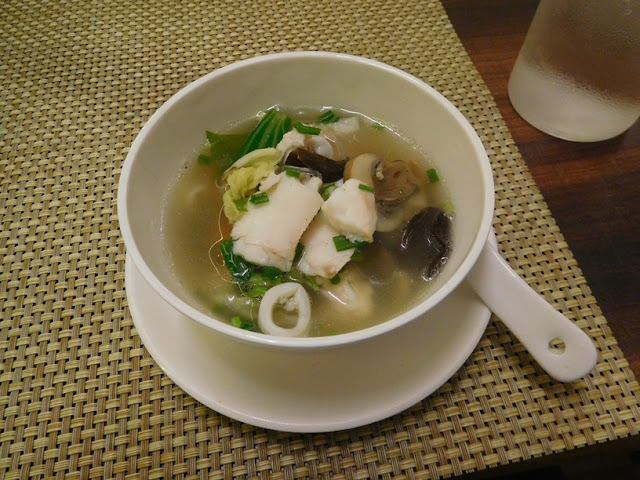 Next came Oriental Mango Salad. And I was bowled over by this tangy delight with a dash of sweetness, made with cubes of mango, cabbage leaf and coriander leaf bathed in a transparent broth. This was just what the palate longs for in a hot and humid weather and a perfect starter for a hearty, relaxed meal.

The Fried Chiken Wonton was not bad but couldn’t do much for me thanks to the relish of the mango salad. When it comes to wonton, I am all for steamed varieties and pan fried/ fried versions have never impressed me. This crispy dish had a thin filling of chicken and I thought it would have been a more enjoyable with a thicker filling.

The King Crab in Chilli Oyster Sauce came next and the size of the crab was large enough to draw attention. A rare find in Kolkata eateries, Prithvish revealed that he owes the credit of sourcing such large crabs to his supplier who mainly services export orders. The crab had already been broken to facilitate our going ahead with it. The flesh was tender and delicious in a thin, spicy gravy full with vegetables. Easily the dish of the evening and wins a recommendation. The picture shows a standard portion that comes at Rs 650 plus taxes.

Prithvish told us that all the sauces- served on the table and used in the cooking- are made in-house. They also keep the saltiness (which also comes from soy sauce in Chinese cooking) on the lower side in their dishes. These two combined is one of the reasons behind the signature old school Chinese taste of Tak Heng which feels quite different from the Chinese eateries in the city, including the old and the new .

Tak Heng serves whole fish apart from the familiar fish dishes and one such landed at our table. It was fish in a special sauce- a whole beckti in a thin, tangy sauce served with rice and broccoli. Tak Heng uses only beckti and Prthvish believes the basa fish, common to most of the restaurants now, doesn’t even compare with beckti on the taste front. 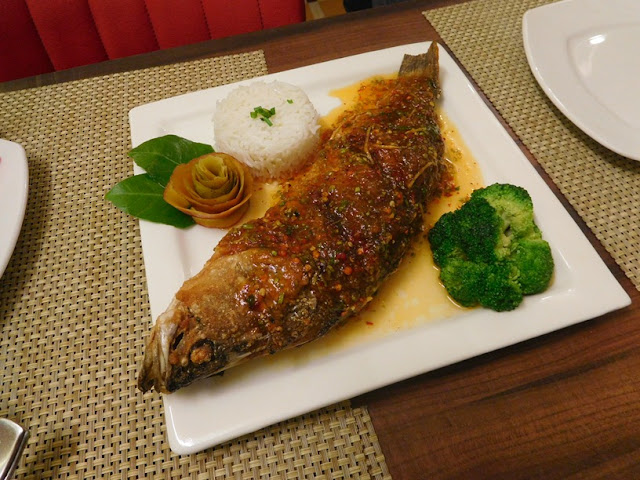 The fish is served with some rice and broccoli. It was fresh and tasteful, but the tang paired with a dash of sweetness overpowering the spicing was the reason it didn’t appeal to my palate as much as I expected it to. It was not tart but. My humble suggestion for the chef was to tone down the sourness and enhance the spiciness. That said, a customer can feel free to customize it to his/her palate by placing a request at the time of placing order.

The main course was Burnt Ginger Fried Rice and Singagpore Meifoon (chicken). On the side was Chicken Mushroom Babycorn and Prawn in Hot Garlic Sauce. The slight smoky flavour of the chicken fried rice complimented the side dishes. Frankly speaking, after the fabulous crab, these two didn’t impress, though I must say they were decent. I liked the chicken preparation. At the cost of repeating myself on this blog let me say that that I love mushroom and I find Kolkata not offering enough choices for mushroom-lovers. Juicy, boneless chicken, mushroom and babycorn cooked in a thin, light-coloured gravy brought out a subtle flavour which won over my palate. The ideal dish if you would like something not spicy (for a change) yet flavourful on the side. It earns a recommendation! I realize the number of recommendations is looking higher than usual but this place merits it.

The Prawn in Hot Garlic Sauce, with jumbo prawns in a thick, spicy gravy, to be fair, was not bad, but I didn’t feel any subtle difference. I was probably too full for that. It is made of authentic Cantonese hamei sauce and much less spicy than its Tung Nam version.

We sincerely wished to skip the dessert as we couldn’t take anything else, but Prithvish earnestly requested us to try the dessert and asked us to guess what it was made of. I am not good at guessing food ingredients, but Indrajit, who has studied hotel management, gave up too. Pritvish revealed that it was called Sankaya- a Thai custard pudding made of pumpkin, jaggery, coconut and duck egg. I don’t like pumpkin, but couldn’t help finishing it, it was so delicious! It paired well with the scoop of vanilla ice cream served with it. Can’t help, this deserves a recommendation too.

The prices are premium (Pocket pinch Rs 900 for two) but I was told that all the portions suffice two persons. It is full on weekends leading to a queue outside, so reservation would be wise.

If you liked reading the post, you may visit this blog's Facebook page (click on the link) and hit the 'Like' button to stay connected with the future updates on this blog and more on the page.
Posted by Anirban Halder at 9:24 AM