After the third round Kaushik-Mimi was leading and Dev-Subhashree was trailing, with company from by….surprise….Srijit-Rupam! Srijit got a really tough question in this round (What was the name of the character played by Churni Ganguly in her film Nirbashito?). The answer was: No name was given to the character. Ironically the question got passed on to Kaushik-Mimi who answered it as expected (For those uninitiated, Kaushik Ganguly is the husband of Churni and produced the film).
The fourth round called ‘Playscope’ was not quiz. It was the highlight of all the fun that the audience had out of the show. Mir called each team and asked it to perform to a given situation or gave a challenge. Here are the funniest ones.

Team 2 (Rituparna-Joya) was called and after a brief note on the Indo-Bangladesh friendship and a reference to the recently concluded Asia Cup final (Where Bangladesh lost to India in a closely fought match), the contestants were asked to do arm wrestling! Both were taken aback for a moment. To add to the embarrassment Prosenjit was called (rather persisted by the emcee to come over) to officiate it. After an initial resistance by both Rituparna and Joya, the game started amid cheers from the peers in the audience and ended in a draw (no prize for guessing why, smarter women!). But it was great fun seeing two leading actresses in an official fight! It seemed the contestants enjoyed the most. The pictures will tell you. 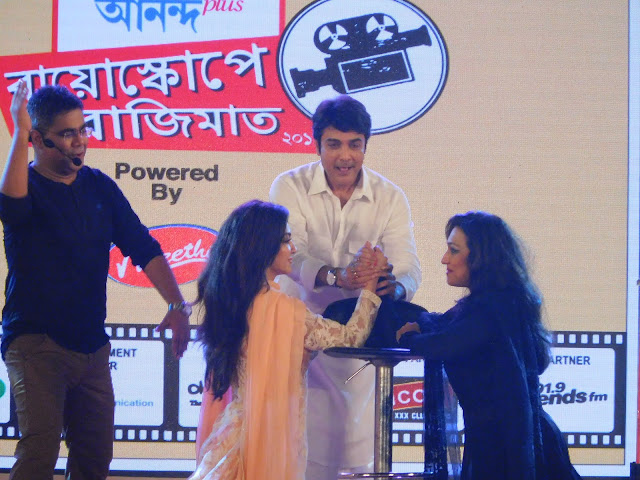 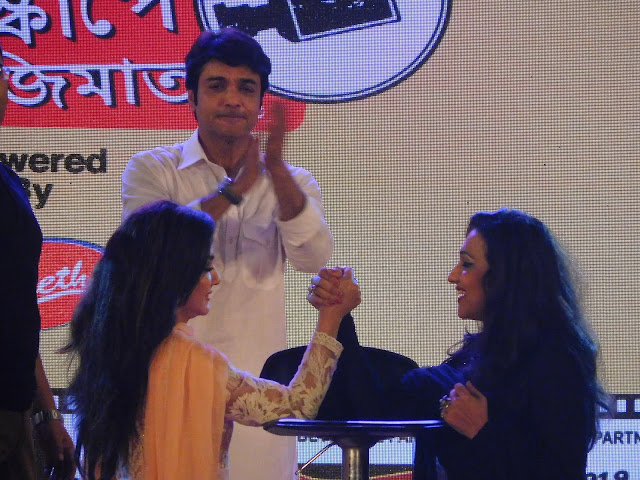 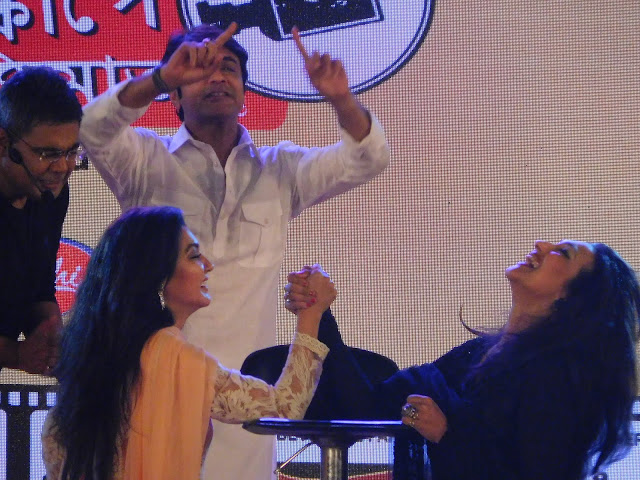 Next up- team 3 (Srijit-Rupam). Rupam was asked to sing ‘Benche thakar gaan’, his chart-topper from Autograph, Srijit’s directorial debut, and Srijit was asked to, hold your breath……..match steps with it! The resistance this time (from Srijit) was obviously longer. Kaushik Sen taunted that it was destiny’s way of doing justice to all the hardship that he had put Kaushik through filming Zulfiqar. Srijit had no other way but to fall in line as refusal would be unsporting. So as Rupam sang, he matched steps in the most disinclined manner, holding Mir. 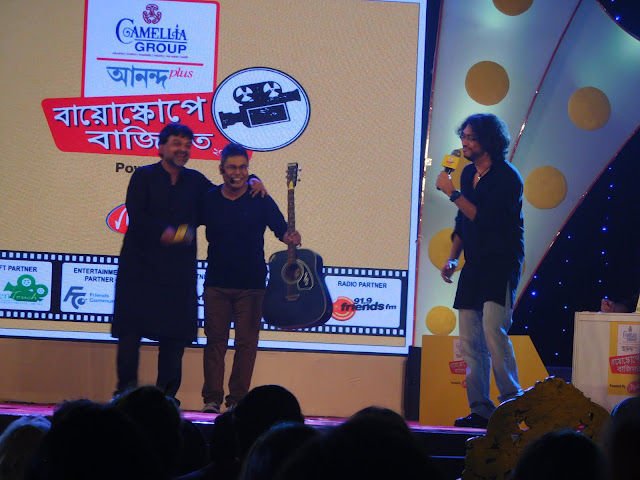 Team 4 (Anindya-Kaushik) was given a tougher task albeit on similar lines. Kaushik is playing the evil ‘Kalo Bhromor’ in the under-production movie based on Niharranjan Gupta’s story (both named Kalo Bhromor) on his popular fictional sleuth Kiriti Roy. Anindya had to sing the song ‘Ghorete bhromor elo gunguniye…’, prefixing ‘Bhromor’ with ‘Kalo’ on the request of the emcee and Kaushik had to play the ‘Bhromor’ (bee) and move all around. Kaushik pulled it off with his presence of mind by indicating the moving bee with hand gestures. 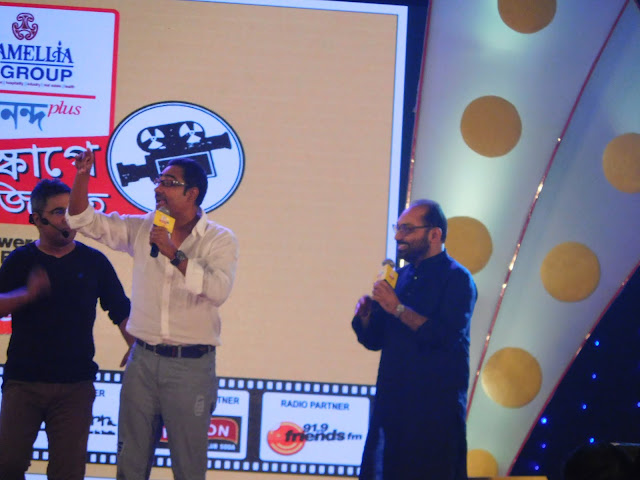 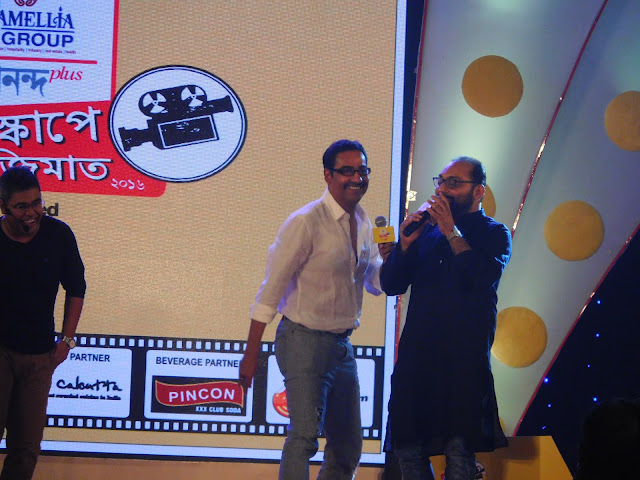 In their turn Parambrata and Paoli (Team 6) was asked to do this: Param was to play Anjan Dutt (His director in the upcoming Hemanta) who was auditioning Paoli. Param lapped it up and with the help from the pair of Anjan Dutt-style dark glasses provided to him gave us a brilliant act peppered with the familiar gestures and vocal style of the eminent director. He deserved bonus points for this which was easily one of the most hilarious parts of the contest. 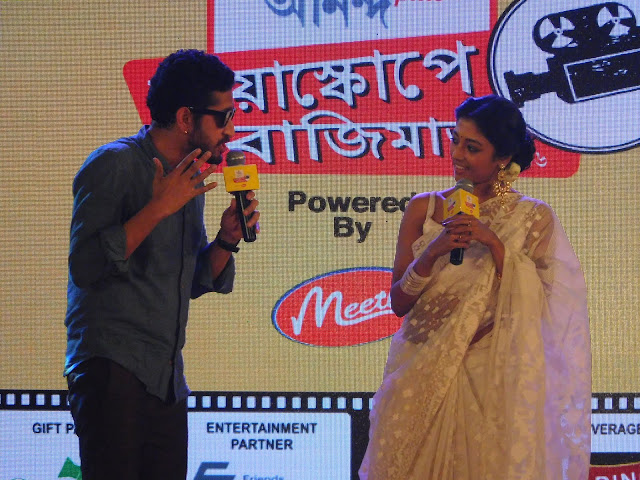 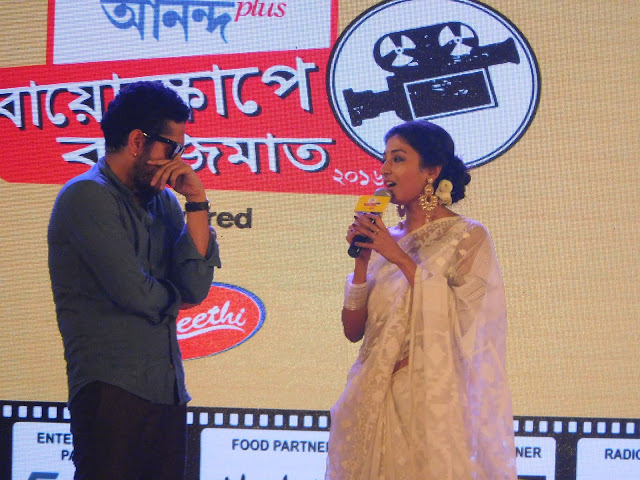 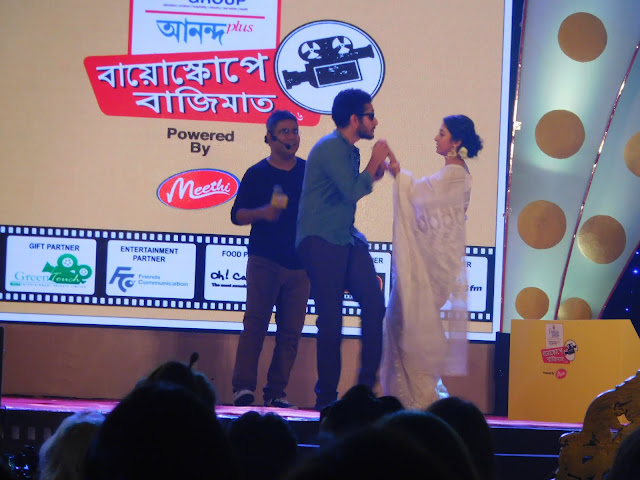 Last turn- Team 7 (Dev-Subhashree). In their comeback film Dhumketu the unit was to shoot in Narkanda, a town in the Shimla district of Himachal Pradesh last winter. Due to heavy snowfall the director had returned as he had fallen sick. It was incredibly cold and senior journalist of Ananda Plus Indranil Roy, who was with the unit to cover the shoot, felt like returning leaving his assignment. The story narrated by Mir goes like this: Dev and Subhashree sustained the inhuman weather staying together in a hotel room thanks to a single piece of blanket and a room heater. Mir asked the pair to show the audience how they achieved this feat. He also helped them with a blanket and a room heater (which he said were the same blanket and heater. He even smelled the blanket and asked Subhashree if the perfume was Chanel). Dev struggled to play this bouncer and ducked it saying he had no other way as he was the co-producer.

As obvious to those who are familiar with Mir’s performance, he was at the top of his game throughout this round and even put up mimicry of Indranil Roy calling up his boss Gautam Bhattacharya from Narkanda and pleading to be allowed to return. This got the loudest applause! He also kept on flirting with the girls helping with hand mikes and props. 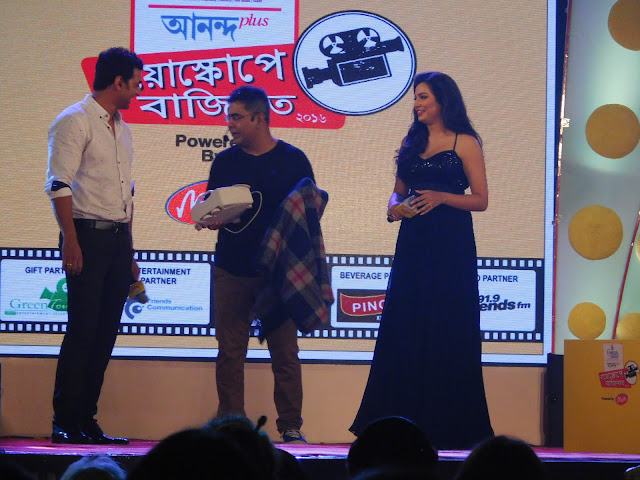 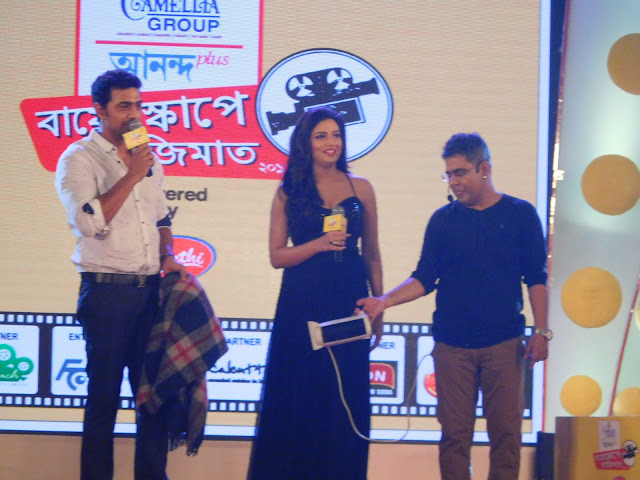 The last round was a rapid fire and Gautam Bhattacharya took over. It was the ‘Ananda Plus’ round and comprised of questions based on articles and film reviews published in Ananda Plus in recent times. Each team had to nominate one contestant and he or she had to face the quizmaster form a seat centre stage. There were 45 seconds to answer all questions.

All the teams except Srijit-Rupam and Anindya-Kaushik performed decently to competently in this round but Kaushik Ganguly, representing his team, outshone others. Dev used his guessing skill to come up with a good performance. The other teams were represented by Abir, Rituparna, Srijit, Kaushik Sen and Param. 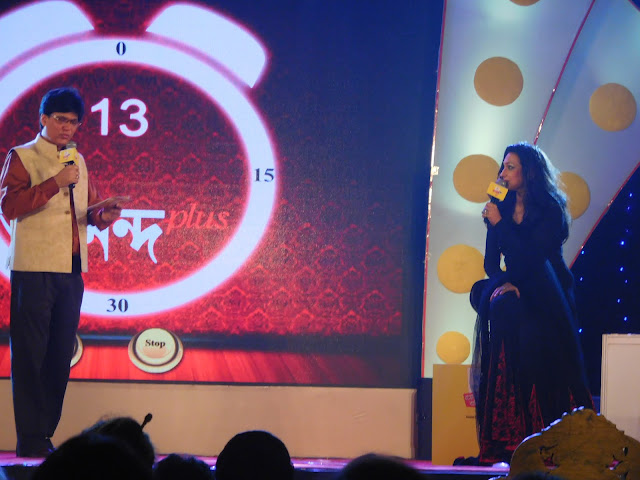 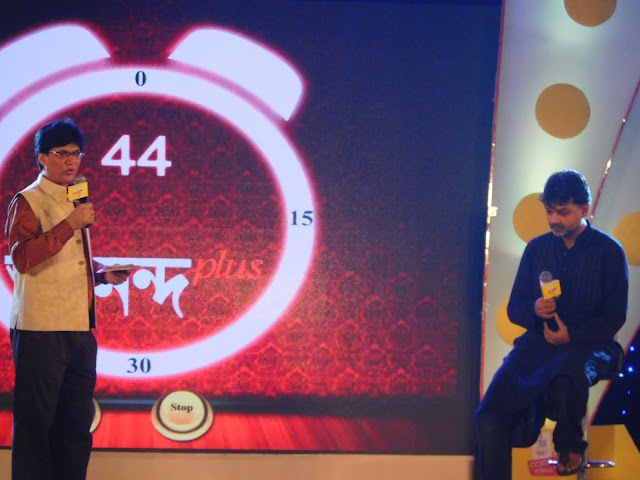 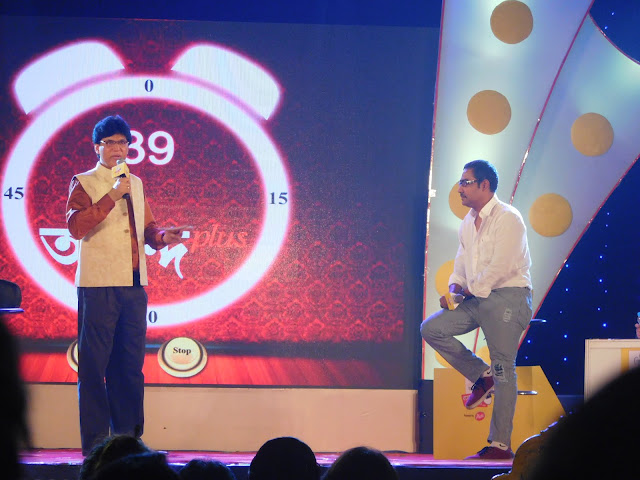 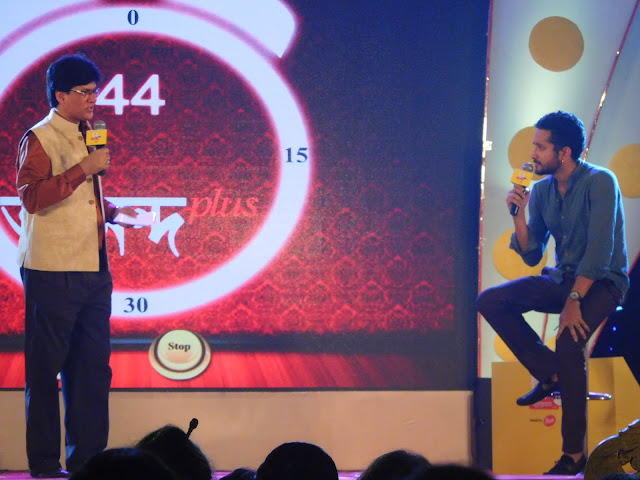 As expected, Kaushik Ganguly and Mimi Chakraborty were the winners. This marks Kaushik second win in this contest. Parambrata and Paoli ended as the runners up. Dev-Subhashree ended well. The final tally:

Every team was called and given away a memento and other prizes. Soumitra Chattopadhyay was called to do the initial honours. Param probably loved the dark glasses so much that he continued wearing it. I couldn’t wait to catch the winners receiving the trophy as it was quite late. You can catch it on Ananda Plus or the Anandabazar Patrika website www.anandabazar.com. 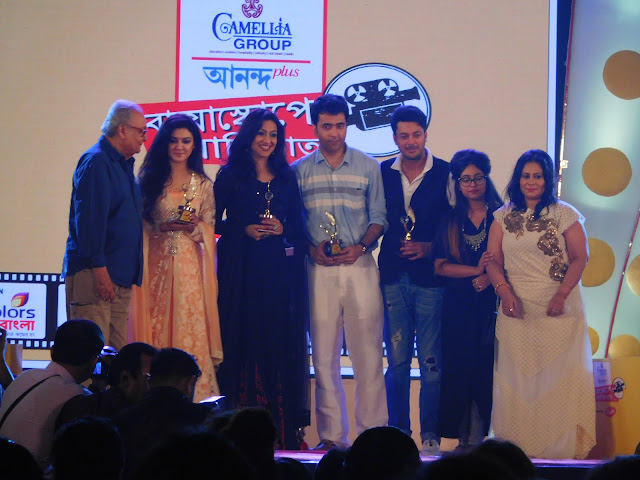 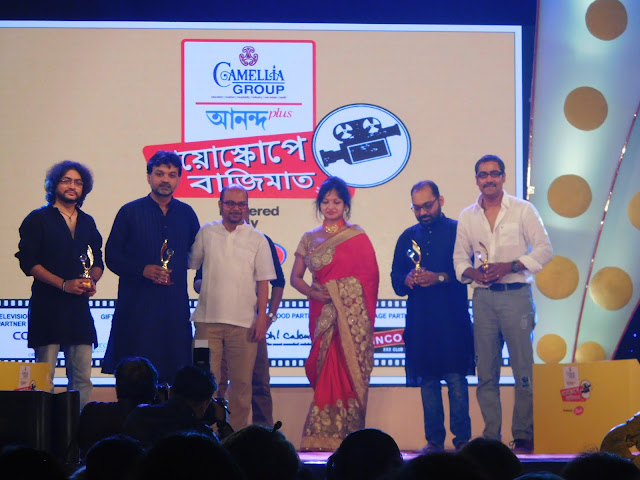 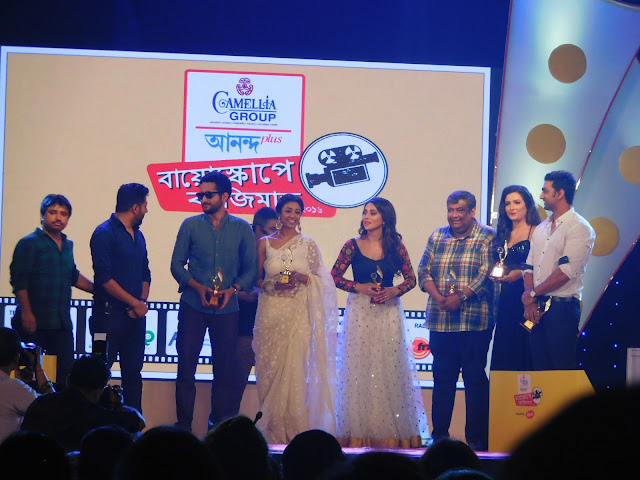 The dinner was hosted by Oh! Calcutta. We walked into the clubhouse to sit and eat. It was a pleasant surprise to see the biggest of all stars closely- Saurav Ganguly enjoying his meal surrounded by a constant stream of visitors- common people to celebrities. Everybody who was there seemed to want to say ‘Hi’ to him. He figured high on the selfie wishlist. These few moments took the enjoyment of the pleasant evening a few notches higher. 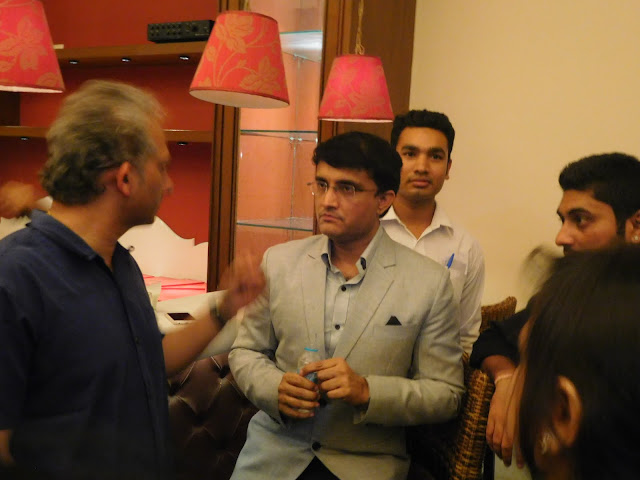 If you liked reading the post, you may visit this blog's Facebook page (click on the link) and hit the 'Like' button to stay connected with the future updates on this blog and more on the page.
Posted by Anirban Halder at 11:04 PM