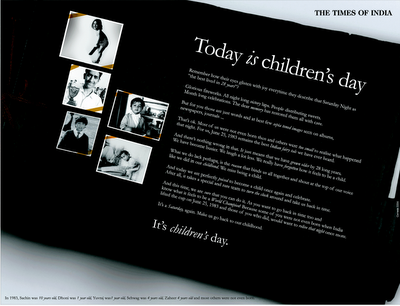 Loved this advertisement by Times of India in today's edition to bring back the memory of 25 June, 1983. I was in standard III then and watched the match in a black & white television in a neighbour's place. India accomplished the unimaginable - beat the mighty West Indies in the World Cup final.

Feeling nostalgic today. The difference is that today it's not unimaginable any more. India is a top cricketing power and can beat any team on earth. Looking forward to Mahi & co. beating Sangakkara and his tough men in today's World Cup final in Mumbai.

Will be finishing work and join the boss and colleagues in the conference room in cheering for Men in Blue in front of the projection of online live streaming of the match the entire nation will be watching 2.30 pm onwards. Over lunch and drinks, for which everyone has pooled in money, to add to the mood. Let's Bleed Blue, as Pepsi urges us to.

For a better view of the advertisement, click on the picture.
Posted by Anirban Halder at 12:14 PM