The nail-biting finish to the World Cup final on 2nd April was in contrast with the final on 25 June 1983. That evening we saw it coming after Kapil caught Richards incredibly. Finally, thanks to Gautam Gambhir's and Mahi's resolute knocks in a high-pressure situation we rule the cricketing world......after 28 long years. 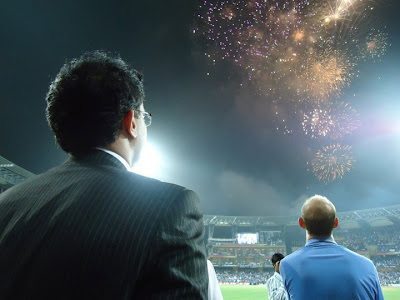 Couldn't resist posting this picture of Sourav, watching the celebration of India's World Cup triumph at Wankhede stadium on 25th April 2011 from a distance. Didn't anybody remember to call him to join in, like they called Anil Kumble for a photo op? After all he was one of the early architects of today's invincible Team India, someone who took an underperforming XI to the World Cup finals in 2003.

(Photo courtesy: Debasish Sen of 'Extra Time'.)
Posted by Anirban Halder at 11:54 AM