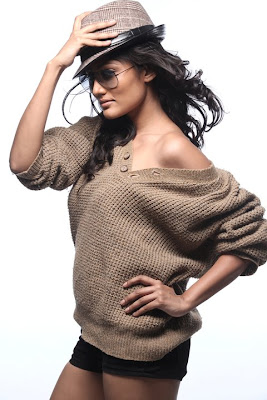 I was surfing the channels post dinner. A familiar face of an anchor stopped me. She is from Kolkata, and it was a national entertainment channel. Hence I checked the channel name again, more so as a similar sounding Bangla music channel has just been launched. Yes, it was Zoom. And the lady in question was Pamela Singh Bhutoria. A well-known model from Kolkata who has turned actress of late.

Pamela is tall, slim and dusky, with an appealing mix of charm and sensuousness. Being comfortable in Bangla, I always thought she had what it takes to make it big in Bangla movies. However, going by the realities of the Bangla film industry in Kolkata, it is not surprising that she is yet to be considered by a big banner despite being all over media and successfully anchoring TV shows on Zee Bangla and Sangeet Bangla.

In this age where every young aspirant in showbiz and music, who hasn’t got the right amount of work in Kolkata is testing the Arabian Sea waters, it seemed but natural that she wouldn’t stick to Kolkata too. Having a good command in Hindi and English has landed her at the right place. Zoom, no doubt, is a great platform to earn her valuable brownie points for a television career and who can say, may land her a role in a Hindi movie too. Pamela was anchoring ‘Hot List’ on Zoom, a show that listsed ‘Hottest desi numbers’ from Hindi cinema, from Madhuri Dixit to Rakhi Sawant to Aishwarya Rai to Bipasha Basu, somehing that naturally goes with her sensuality.

And by the way, Pamela has recently landed a role in a Bengali movie too (Under production), directed by young and talented Mainak Bhowmik, called Ami vs Tumi.
Posted by Anirban Halder at 8:15 PM