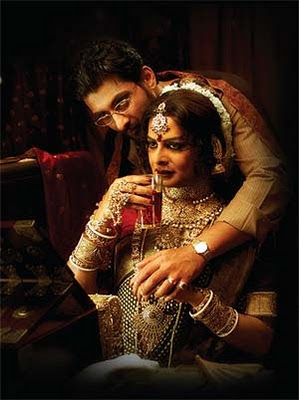 The keenly awaited Kaushik Ganguly film Arekti Premer Golpo (English title: Just Another Love Story) marking the acting debut of Rituparno Ghosh is releasing this 24 December. The film explores the relationship between a gay filmmaker (Rituparno) and his bisexual cinematographer (Played by the new pin-up boy of Bangla alternative cinema – Indraneil Sengupta), detaching itself from the homoerotic aspect of such a relationship. The film also has a film within it and Rituparno plays another role in it, that of the famous jatra actress Chapal Bhaduri, who was known to play female roles. Watched a talk show on Star Ananda on the film today, where Kaushik and Rituparno, both reasonably excited, were present to provide an insider’s take.

An anecdote shared by Rituparno was that he was mistaken as a 'newcomer actress' as long as he was in the get-up of his character in the film-within-the-film during the outdoor shooting in Bolpur. It was obvious that both he and Kaushik (and surely other members in the unit too) found it an uproariously funny experience.

As for the obvious question of the similarities between Roop (The character of the filmmaker that Ritu plays in the film) and Rituparno himself, Kaushik pointed out that the two persons share a keen sense of aesthetics and a single-mindedness in work. The former is an important trait in this context surely, as Rituparno’s sense of aesthetics is well-known, and quite obvious in his body of work. He is known not to like his actors to use make-up (unless and to the point it is necessary) and nonetheless his women on screen look strikingly beautiful.

Rituparno was a hard taskmaster to himself for a change and gave the role his very best, right from physical preparation (He lost a lot of weight through regular workouts) to the finest detail in look and acting. By his own admission in the show, he started missing Roop deeply once the shoot was over. Ritu is also the Creative Director of the film.

Arekti Premer Golpo is actually a screen adaptation of Kaushik’s famous telefilm Ushno Tar Jonyo starring Roopa Ganguly, Churni Ganguly and Chapal Bhaduri, made for ETV Bangla years back. The difference is that a lesbian relationship was at the core in the telefilm, whereas in the film it is a gay relationship.

The first look of the film (Similar to the picture above), showing Rituparno in a deeply emotional hug with Indraneil, has surely evoked curiosity. The film has already made a lot of news and repeatedly drawn housefull audience in a lot of places the festival circuit as the two revealed in the show. Keenly looking forward to the release of the film.
Posted by Anirban Halder at 8:59 PM