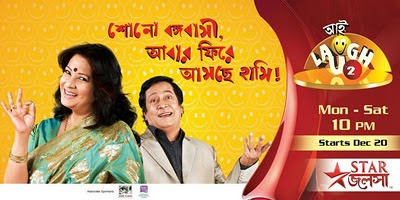 'I Laugh You 2' kickstarted last evening on Star Jalsha. The entry of Ranjit Mullick was funny. He danced into the stage to the tune of his hit song Jodi Jagai Madhai na thakto/ Tobe Netai ke ki chinto loke from Mouchak. Moon Moon had taken her entry first. She mentioned " Good concept, good producer, good people to work with..." as her reason to judge the show and come back to television after ages.

Neel Mukherjee, Rudraneel, Shantilal Mukhopadhyay, Partha Sarathi Deb, Partha Sarathi Chakraborty and Kousani Roy were among the participants in pairs. The show started with the act by Neel Mukherjee's pair where it performed a well-known skit. Kousani played a characted called 'Tunir Ma' in a TV show that 'officially' airs trash. There was no gem of an act though. Ranjit had a bit of reservation for an act that was on (or on the other side of) the borderline of decency by the older generation's standards. Moon Moon though was game and she let the audience know it, only after she pulled Ranjit's legs for his 'strictness' .

The marks scored by the pairs mostly stayed between 10 and 12 out of 20. So, though the judges are appreciative, they are not lenient in giving marks.
Posted by Anirban Halder at 2:18 PM