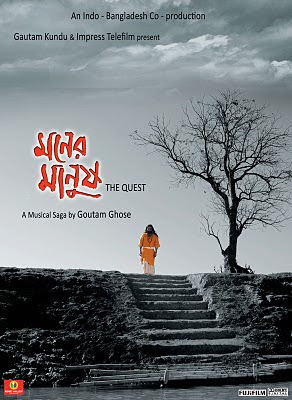 Returned disappointed from Jaya Cineplex, Lake Town last Sunday. Had gone there to catch the evening show of Moner Manush which had gone housefull before I reached the ticket window. Blackmarketeers had a filed day nearby selling the Rs 50 tickets at Rs 100. It's unimaginable for this genre of films!

Reached the nearest theatre screening the movie - Darpana, at Hatibagan - in a hurry. But things were no different there too.

It was indeed a pleasant surprise as alternative Bangla cinema, that too with this kind of a subject (The life and times of the legendary Lalan Fakir from the 18th century, based on Sunil Gangopadhyay's novel of the same name published in the Desh Puja number in 2008) is not deemed 'hot' at the box office. Reportedly Moner Manush has a better second weekend. The word-of-mouth publicity seems to have helped. The audience predominantly had couples in their 40s and 50s - a class that's surely not regular at theatres anymore. Kudos to Gautam Ghosh & team to bring them back.
Posted by Anirban Halder at 10:13 AM