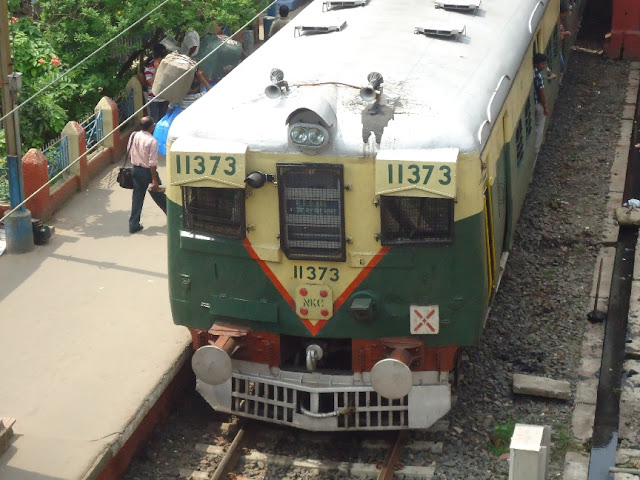 The fourth seat
Actually, it’s non-existent. A local train from Sealdah (or ) has either three seats in a row or a row of eight seats along the wall at either end. So, what’s the idea of a fourth seat?

It’s a virtual seat. Virtual, in a non-digital sense. The norm followed by passengers is that four people must sit on the three seats. And this often leads to funny outcomes to hot altercations between passengers.

It starts with a passenger requesting the three passengers already occupying the seats to shift for making the minimum space for him/ her to fit in, verbally or with a common hand gesture. What happens thereafter determines how comfortably he/ she will be sitting through his/ her journey.

If the passengers occupying the seats are of average health, the fourth passenger gets a decent place to somehow fit on. If one or more passengers sitting are on the leaner side, or there is a child among them, it’s better. But if one or more of the sitting passengers are generously built (the more, the worse), discomfort is spelt for the fourth. The degree of it depends on how he/ she is built. If he/ she is just healthy, it’s less discomfort. If more than healthy, it’s bad luck. In this case, the fourth person either sits on the given space or requests the other three to ‘adjust’ a bit if possible. The request may be stern if he is aggressive. The other three are reminded that four people should seat comfortably. And the fun begins then.

Generally, one of the other three points out, “Look at the average health of ours. You are right. But you should also keep in mind that it entirely depends on the size of your co-passengers.” It often leads to an argument where the fourth one points out at how one (generally the one sitting  by the window) is not cooperative and could shift a tiny bit (freeing just about two inches) so that he or she could sit a bit comfortably. There are insensitive passengers who will budge barely or not at all pretending he can’t help it. Often other passengers, sitting or standing, join in and the conversation gets hotter.

An overweight friend of mine once jokingly remarked how his paunch ensured that he got a better deal at the fourth seat. His girth was ‘respected’ by the ‘sensible’ co-passengers and they tried their best to free as much space for him to fit in as possible. Had he been skinny, he would not have this ‘privilege’. But honestly speaking, he used to be lucky and this is often not the case.

Often a witty co-passenger snubs the fourth person negotiating for a larger slice of the seat or just enough space to fit half of his rear, stating, “You are right (that your seat is narrow), but it’s all in the size, dada (Hinting at the healthy to chubby occupants)”.

Size does matter when one is claiming the fourth seat, and the lean has a cutting edge on the healthy and the plus size.

A hack when one doesn’t get enough space to sit- Turn and sit facing the side wall. Rather than struggling to fit half the rear, you get to seat a bit comfortably. But this will not be possible in a crowded train where there are passengers standing all around the seats as it will not allow the leg space needed in the aisle.

When I am not in a mood to stand or too tired to stand on a local train, and the seats are occupied, I try and hunt down the maximum size of the fourth seat with a hawk’s eye on a quick walk on the platform across the compartments. The moment I spot it, I rush to grab it before it catches anyone’s ‘fancy’. My build neither gives me the cutting edge nor it puts me at a disadvantage. So, it pays to be choosy.

Local train ride can be tricky, you see. It also has many more interesting shades that create a deep attachment for a passenger.

If you liked reading the post, you may visit this blog's Facebook page (click on the link) and hit the 'Like' button to stay connected with the future updates on this blog and more on the page.
Posted by Anirban Halder at 12:39 PM