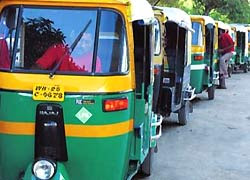 The people are reportedly ready to take the pain of jostling in much fewer public vehicles simply because they can breathe much better. And as one of them I too welcome the outcome, though it has made my journey to work costlier on some days when due to shortage of buses that I can get into I have to change the route to reach office in time.
Posted by Anirban Halder at 5:51 PM