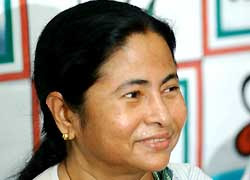 First, the stunning sweep in Bengal in the Lok Sabha elections (25 off 42 seats) in May 16, followed by the not-so-unexpected municipal elections (13 off 16 municipalities) end-June, the Trinamool Congress- Congress (Indian National Congress) combine is riding on the rock-solid anti-left wave. The fate of KMC elections next year is clearer and the predictions for the 2011 assembly elections in Bengal has probably started. Is a green revolution waiting to unfold two years from now?

Very interestingly the image of the Trinamool supremo has visibly started evolving since before the LS elections. Mamata Banerjee looked unusually calm (even on the face of provocative questions), smiled a lot (and with ease!!), used a rarely-witnessed sense of humour and quoted classic literature in the long TV interviews on Star Ananda in the build-up to the Lok Sabha polls. She has apparently discouraged victory processions even after the historic LS results and now telling her party's supporters to become 'modest' after victory.

All this is in a stark contrast to the Mamata we always knew. Needless to say she's scored quite a few brownie points among those who've never exactly liked her way of doing things. This Mamata is calm, more in line with strategic thinking, shows a healthy temperament and on a single-minded mission that is a complete washout of the Left Front in the 2011 assembly elections in Bengal. There are reasons for increasing creases on the foreheads of Alimuddin's top brass.
Posted by Anirban Halder at 11:28 AM

Email ThisBlogThis!Share to TwitterShare to FacebookShare to Pinterest
Labels: Politics