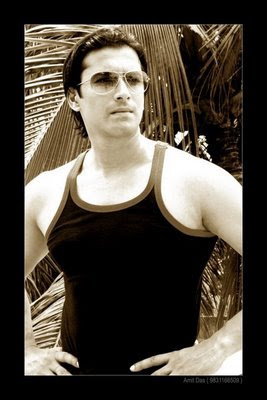 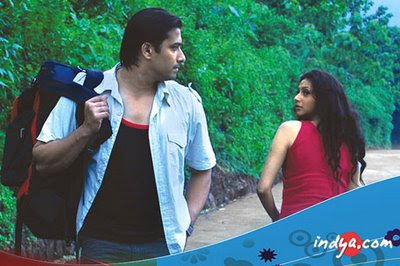 Rishi Kaushik made his debut on Bengali television a couple of years back in a telefilm produced by Indrani Halder, she playing the female lead. He looked impressive (playing a commando) right then, with potential for television and mainstream Bengali cinema too (given the right grooming and handling).

Years have passed by. Rishi has worked selectively on television. He has won many hearts for his sensitive portrayal of Indra, paired opposite Aparajita Ghosh Das playing his love interest Mohar, in the popular Zee Bangla soap Ekdin Pratidin.

It is beyond me why save for a few Bengali films like Riingo's 'Kranti' and Traun Majumdar's 'Chander Bari' he has been largely overlooked by the successful directors of Bengali mainstream cinema, who've rued in the media for the lack of actors with hero material i.e. goodlooking young men who can sort of act or can be made to act. In Kranti he played the dashing college baddie and brother of the villain Ashis Vidyarthi. In Chander Bari his character was not the lead and had a very traditional Bengali look. So his potential of being a frontrunner for the leading man's slot has been given a complete miss. Its more of a loss for the industry and the audience with a visible appetite for new heroes than his, I believe.

Hence this handsome hunk (having seen him personally at events I vouch for the words), instead of winning hearts of cinegoers giving his peers in hero-starved Tollygunge a run for their money, is charming the girls (and the women including mothers and aunts in all possibilities) as Dr Ujan Chatterjee, romancing Aparajita Ghosh Das again, in the soap Ekhane Akash Neel on the new Bengali entertainment channel Star Jalsha (Picture at bottom).

To cultivate him, visit his fan blog rrishiikaushikonline.wordpress.com.
Posted by Anirban Halder at 7:48 PM