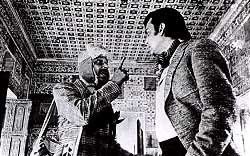 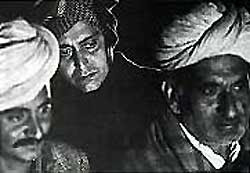 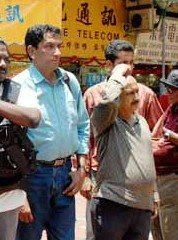 The first phase of hoardings of Tintoretor Jishu, the latest Feluda flick announces 'Tintoretor Jishu is just coming'. And that takes me to the topic of this post. Yes, this has been an oft-debated subject. Which Feluda is better, Soumitra- the Ray's Feluda or Sabyasachi- the Ray Junior's Feluda of today. But I have restricted my thoughts to the physicality of the character.

Every Feluda fan worth his/ her salt knows his (Feluda's) physical attributes without what he can't be visualized. He is tall (6 feet plus) and well-built (Thanks to freehand exercises and yoga at home). I don't remember whether Ray ever wrote it expressly but Feluda is handsome without an iota of doubt (no wonder he has many a female admirer to his credit), and most importantly he is in his thirties. He never grew old after mid-thirties, something that was expected of such an iconic detective in Bengali literature.

I somehow came in terms with Sabyasachi in Bombaiyer Bombete, his first feature film as Feluda directed by Sandip Ray (Ray Jr). Things like the way he was rehearsing martial arts with Rajesh Sharma (playing Victor Perumal) or his style of shooting Rajatava hanging from the train (very un-Feluda-like expression) didn't go well with me......but still thought well, he is sort of okay.....if he is not then who.....there can't be anymore Feluda on screen then for this generation.

But Sabyasachi's appearance really shocked me in Kailase Kelenkari released last December. How could he even think of allowing himself to look like that? He was looking reasonably older than what Feluda can be accepted to look as and worse still....unfit!! A little pot belly showed on him and he was extremely ill at ease in the chase scene in the climax. In fact he looked downright funny in the dark profile shot in that scene. It was clear that he had been taking himself for granted as Feluda.

Though Sabyasachi is not in the best age to play Feluda, a dedicated regimen of working out under supervision and a right diet would have given him at least an acceptable physique and a younger look, with, importantly, the right postures for the character to take care of the physicality. Sadly, he is too lazy to do anything like that.

As for Ray Jr, he never got his Feluda right. Right from his first outing with Feluda-'Kissa Kathmandu Ka', the TV series on Doordarshan in the eighties antagonised the Feluda fans as it had the chubby and old Shashi Kapoor as Feluda. Hence Sabyasachi as he is now shouldn't be much of a problem for him. Also he has already defended himself by saying " aar keu nei" (There is none else (to play Feluda)).

Compared to Sabyasachi, Soumitra as Feluda, especially in Sonar Kella, was just perfect, physically and cerebrally. Well, he was Ray's Feluda after all. And Soumitra never took his look for granted. In his heyday he would work out regularly to maintain one of the best physiques in the history of Bengali cinema. Ray wouldn't have thought of someone like Sabyasachi in his nightmare even if Sabyasachi was from his times and Soumitra was not around. To understand this point the best, look at the photos again where Soumitra (in black & white) is from Sonar Kella and Sabyasachi is from Tintoretor Jishu shoot this year.
Posted by Anirban Halder at 9:14 PM