Thinking of the run-up to Christmas, probably the first thing that comes to one’s mind is cake-mixing ceremony. This age-old tradition followed the world over marks the beginning of the long-drawn preparation of baking the Christmas cake and spreads a lot of cheer and the warmth of the impending festive season among those who do the cake-mixing together. There is a religious angle to it too, as it is believed be a harbinger of good tidings and happiness.
It takes place as an event in all the big hotels around this time. As Aauris invited me to their cake-mixing ceremony well in advance, the curiosity value was high as it was my first ever invitation to a cake-mixing ceremony. It was more of an internal affair for the central Kolkata hotel, with a few food bloggers invited to join them on the occasion.

Aauris is the new kind on the block in the luxury hotel space, located at , off . I’ve been to this hotel earlier this year for a food blogging workshop (There’s a post about it on this blog) and I appreciate the unique and innovative art in the décor.

It was an early afternoon time when we had been requested to take seat. Poulami, the PR manager, first asked us bloggers what we would prefer to wear in the ceremony – chef cap or Santa Claus cap. All of us ended up wearing the latter. It was a simple paperboard rolled into the shape of a chef cap fitted as per the size of one’s head. Executive Chef Sujit Mondale was making the caps.

A long table was formed by joining tables and a wide variety dry fruits were put on it one by one at the patisserie near the entrance. There were usual suspects like cashew, raisin, dried plum, date, dry cherry, tutti frutti apart from chopped and candied orange peel (in green), chopped murabba, dry fig, dried apricot, black currant and sultanas. The hotel team was spreading the dry fruits on the table and it was a nice sight to see more and more colours being added to the tempting mix. 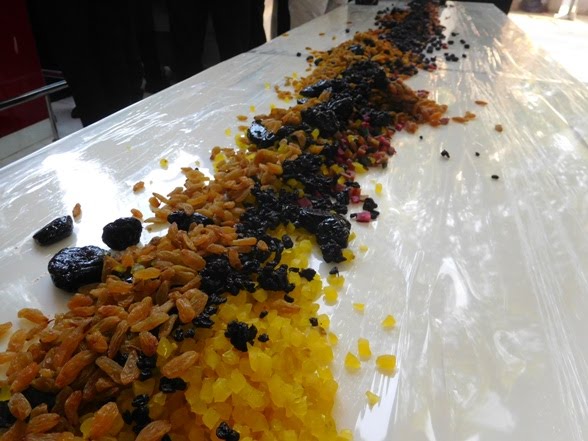 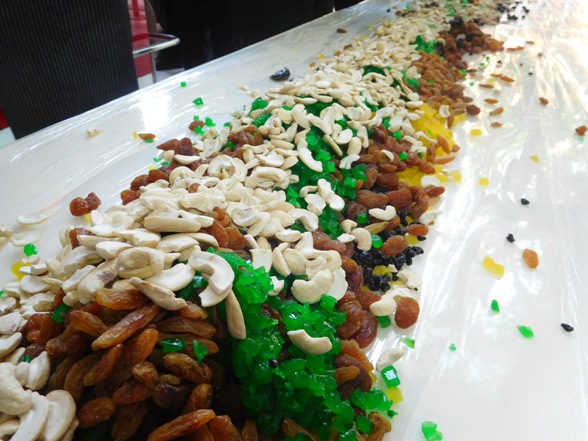 The liquor and wine, essential ingredients of Christmas cake, arrived meanwhile. There were dark rum, red wine, brandy, whisky and cointreau (kwan-troh, a French liquor). The bottles were placed at one end of the table before they were poured one by one, with the rum picked up by the chef first. Thereafter, Ankur Salim Siddiqui, GM of the hotel, poured whisky and quipped that it was the ‘real thing’ being added as someone from his team wanted to find out what was being poured at that moment. 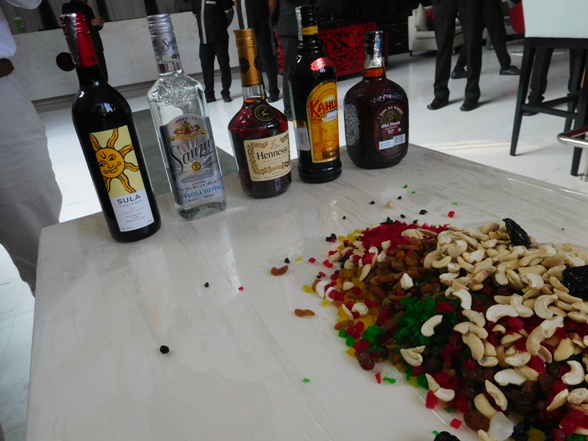 Ankur announced that it was time to dirty our hands. We put on the gloves and joined the team in mixing the liquor well with the dry fruits. The chef told us not to caress the fruits but crush them hard. That’s the way to mix the liquor really well and enable the dry fruits to absorb it as much as possible.

We kept on doing it till the chef who was keeping an watchful eye on the progress was satisfied. The crushed, colourful fruits mixed with liquor of different colours assumed a different texture. I couldn’t resist but taste a tiny morsel of the liquor-soaked goodies stuck to my gloves. Ah…..drunken dry fruit - unlike anything I had sampled ever and liked it.

The chef got the mixture collected in large trays and said that it would be kept for about four weeks before baking. More things would be mixed in phases, like spices (cardamom powder, cinnamon powder, nutmeg powder, caramel colour, ginger powder and star anise powder) in a few days and more wine in about three weeks from the cake-mixing day. The schedule is set to ensure the dry fruits absorb the ingredients in the best possible manner.

We chatted for a while over coffee and fruit cake (baked in their patisserie) before signing off. I was suffering from withdrawal syndrome after dealing with so much of tempting ingredients which would go into making a delicious Christmas cake. The only remedy would be biting into a freshly baked cake and yes, the one I had was excellent! Perfectly balanced in sweetness, the buttery taste was kind of therapeutic.

As a parting gift we received a nicely wrapped basket of a variety of their cakes. I and my kids loved them. 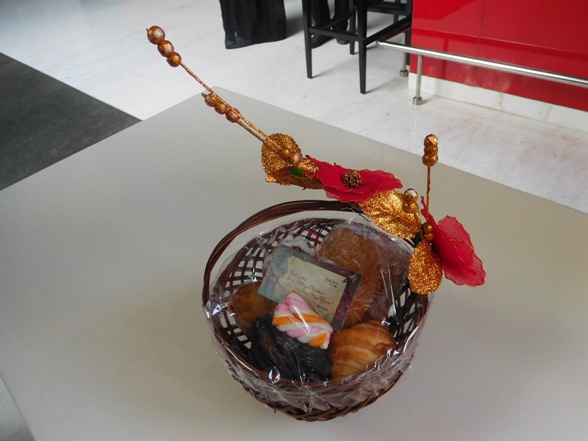 If you liked reading the post, you may visit this blog's Facebook page (click on the link) and hit the 'Like' button to stay connected with the future updates on this blog and more on the page.
Posted by Anirban Halder at 9:03 AM