The approach to tea at The Lalit Great Eastern Kolkata is different from other star hotels. The way tea is served at its tea lounge reflects it (read this post). Its aim is to promote tea tourism in the city as it loves its tea and the beverage is an integral part of its rich history and heritage. World’s oldest tea auction house is from this city.

To mark the essence of tea and to revive the tea culture in India, it organized Tea Treasures, a three-day tea festival at its premises over 16th to 18th August. The festival was dedicated to tea lovers and tea connoisseurs and offered a platform to tea producers, tea marketers, tea shops, tea tourism operators and tea joints in the city.

Mr. Rakesh Mitra, General Manager, The Lalit Suri Hospitality Group summed it up as, “The Great Eastern Hotel, way back, during the colonial era was a major hub for tea trading, and various activities related to tea. With the aim of bringing forth the legacy of tea trading to people and sensitizing them about tea auctions, tea tourism, tea tasting and significance of tea in the Indian market, we have organized the festival.  Top tea trading companies, tea estates and tea auctioneers have associated with us to discuss about the different nitty-gritties of tea. We would dedicate the festival, in the years to come, to all tea lovers, tea traders and the entire tea industry, bringing all of them under one umbrella and present Indian tea to the rest of the world.”

The festival comprised of talk on various aspects of tea by experts, panel discussions, tea tasting sessions, tea workshop, tea auction and celebrity chats over tea (coinciding with trailer launch/ film release) with an exhibition with various stalls by tea brands, tea estates, tea joints/ boutiques, cafes, bakery, tea tourism players and associated products. An interesting proposition for those who love their tea and wish to explore it.

I attended the second day’s tea tasting session at the tea lounge in the evening. Mr Ravi Suchanti, Vice Chairman and MD of J Thomas & Company, world’s oldest and largest tea auctioneer (from Kolkata), with twenty seven years of tea tasting experience behind him, conducted the highly interactive session participated by distinguished people and a few bloggers. Tables with five varieties of tea and their leaves in multiple sets were placed at a distance for each audience member to taste the tea as guided by the speaker. We tasted the teas by themselves and adding milk and sugar. He spoke passionately and engagingly about the growing and manufacturing of tea, throwing in interesting insights. For example, no two teas will have the same quality even if they are plucked at the same time from the same bush. The quality is comprised of texture, mineral content, flavour and taste. 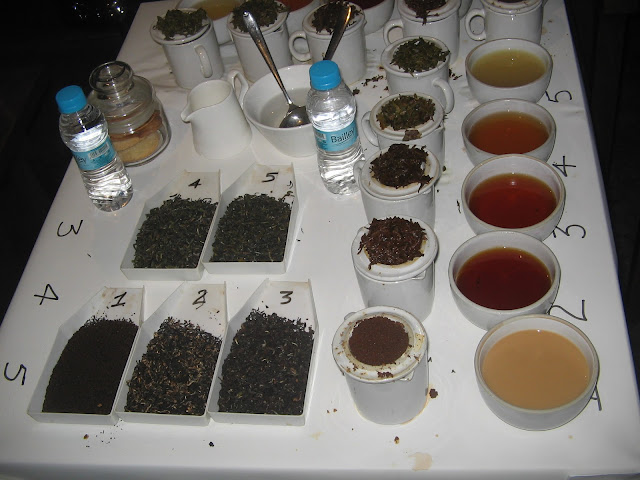 Few excerpts from the talk:

1. There are a few months between the first flush and the second flush tea. Compared to first flush, second flush is yellow, has more absorbed resources in leaves, mellower in flavour and smoother in taste.

3. There are  three stages of tea production-
a. Rolling or withering- When tea leaves are plucked, they contain 77% moisture. It is
brought down significantly by three stages of rolling
b. Fermenting or oxidation
c. Drying- Air is pushed in. The leaves, still green, turn dark.
4. The time for brewing tea is an individual choice. It should ideally be 3-5 minutes, depending on how strong a brew one wants. But for green tea, which is a self-drinking tea as he called it because it doesn’t need milk or sugar, the brewing time shouldn’t be more than 2-3 minutes, and the water should not be boiling but about to boil to get the best of the tea.
Post the talk Mr Suchanti took questions from the audience. Such a session was for the first time for him, but he handled it with ease.

I took a walkthrough of the exhibition happening in a banquet on the ground floor.  The Assam 1860 stall reflected the new age approach with which James Warren Tea Ltd.,  is marketing this new tea brand which is their first consumer product. This one hundred fifty years old tea company has so far supplied tea to businesses like hotels & restaurants and tea brands. The Assam 1860 tea cart is travelling across the city to make people taste it on the streets. They are also signing up corporates to serve freshly made hot tea daily to their employees. Read its review in this post.

Also dropped in at the stall of Melete- a new start-up by home baker Anjee Bhatia from New Alipore offering handmade chocolates, chocolate cakes and truffles, brownies and savouries (pizza cup, quiche, ramekins etc). She started as a home baker like many others in the city and now has a workshop to cater to the increasing orders. As I like brownies, it was nice to see a variety of it in the stall. Melete doesn’t have a retail outlet yet, it takes orders. It also customizes desserts for its customers. Those interested may visit www.melete.co.in.


Zee Bangla Cinema used the platform to talk about their new venture Zee Bangla Cinema Originals, which is a series of full-length movies made for television. They are unlike telefilms and have higher production value like a feature film. All the movies are premiering on television and censored for a big screen release later. ZBC launched the trailer of Bonolata, the upcoming film by young director Rik. Saw television director Anindya Sarkar talking about his film Choturanga which has been premiered on 23rd August. Rajorshi Dey, Programming Head spoke about the initiative and Rik’s film. Saw director duo Sudeshna Roy-Abhijit Guha who came on stage later for the launch which I couldn’t check out.

There was a discussion on the movie Natoker Moto, the film on well-known theatre actress late Keya Chakraborty’s life directed by theatre director Debesh Chattopadhyay on 18th August. The director and cast were present.

Tea auctions by J Thomas were also held as part of the festival to bring an experience of it to the visitors.

Such a festival paves the way to make the city a tea tourism destination and nurtures the tea culture that’s part of the city’s heritage.