The Magnum Masterclass in the city

Chocolate or ice cream? The answer would be either of the options or even both in one, like, a chocolate cone or a choc-o-bar. As it is, in the latter choice, chocolate, at least in this city, plays second fiddle to ice cream. But that’s going to change now, and your choice of ice cream will be driven by the chocolate used in it to take it to another level of pure experience. That’s what the Kolkata edition of the masterclass at Taj Bengal showed on 21st February.

Celebrity chef Kunal Kapoor, who has been a judge in Masterchef India, came to the city to teach an audience of mediapersons a thing or two about chocolate and Belgian chocolate in particular and introduce it to the Magnum experience that drives home the point made above. Giving him company was actress Soha Ali Khan, a self-confessed Magnum lover. The audience was overflowing in attendance (perhaps for the pull of the chef). It was an honour for this blogger to be invited to the coveted event by Magnum, one of the world’s leading ice cream brands from Unilever. It was another pleasure to meet other familiar bloggers connected to the Kolkata Bloggers Facebook page in the event.

The masterclass started with the emcee asking to recall fond chocolate memories. Kunal told how gifting imported chocolates to girlfriends was fun and the fact that they were ‘imported’ did its bit to impress.  Kolkata being a city that knows its desserts, the talk shifted to what their favourite Kolkata dessert was. While Soha’s answer was a typical celeb type “I am torn between rosogolla and mishti doi”, Kunal mentioned patisapta as his favourite. Why, asked the emcee. Because “it’s easy, doable and full of flavour.” Full marks to the chef for being able to win the hearts of Bengali foodies. Kunal was fun and down to earth, cracking jokes every now and then (including at the expense of Soha) and slipping into Hindi often. His easygoing charm hooked the audience and stood in contrast to very starry Soha.

Magnum uses Belgian chocolate only, and the chocolate that goes into it is even more special, being patented for the brand by the biggest chocolate maker of . It comes in three variants (only in stick or bar)- Classic (which is your good old choc-o-bar), Almond (almond studded chocolate crust covering rich vanilla) and Chocolate Truffle (Chocolate sauce running into chocolate coated vanilla). It will be available in the leading outlets in the city from 1st March and costs quite a premium- Rs 90 each bar (90 ml).


The chef, the star and all of us bit into Magnum together, and the first bite gave a distinctive crack that the product is known for. I had chosen the Classic. The chocolate was definitely distinct and its slight bitter, rich taste left a mark. The vanilla inside was top grade too! 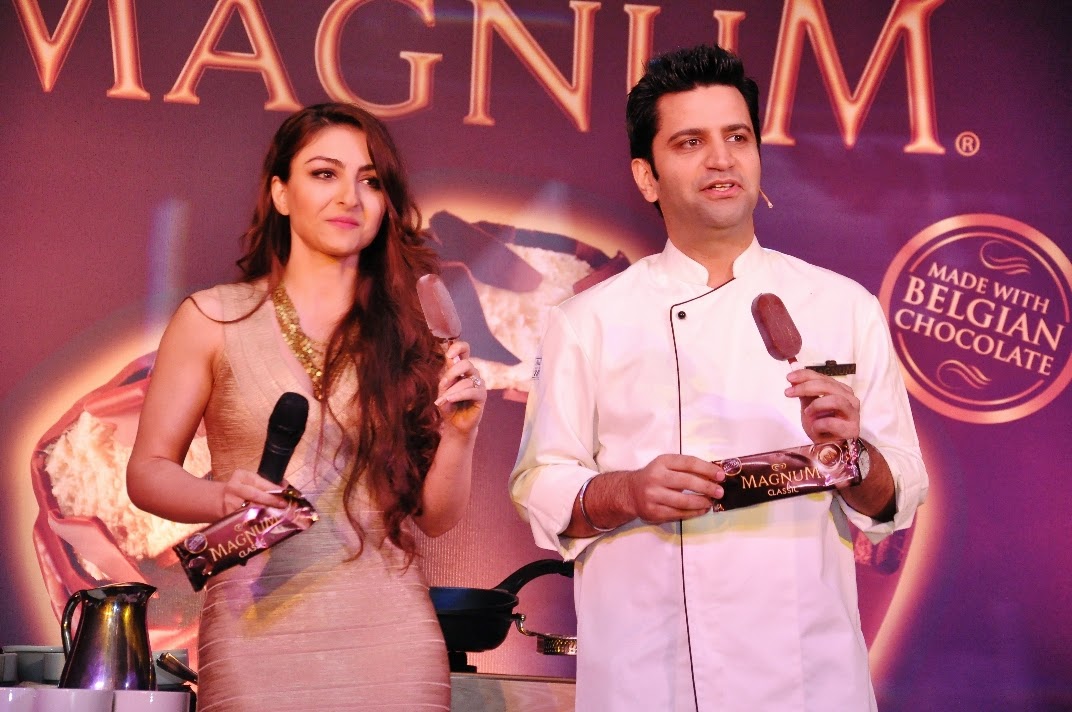 Now, what’s a masterclass without some cooking? So Kunal made his special, Kolkata dish with Magnum, which was a spin to his local favourite- patisapta. It turned out a cone made with the pancake of patisapta (held up by a paper cone), and cut out Magnum pieces, along with khoya (milk solids), nuts, cranberry etc making the filling.

It ended with the chef opening the floor and getting his audience members in various round tables make their own versions of sundae using a Magnum bar and other dry ingredients provided at each table. And some tables did a good job that the chef found interesting. 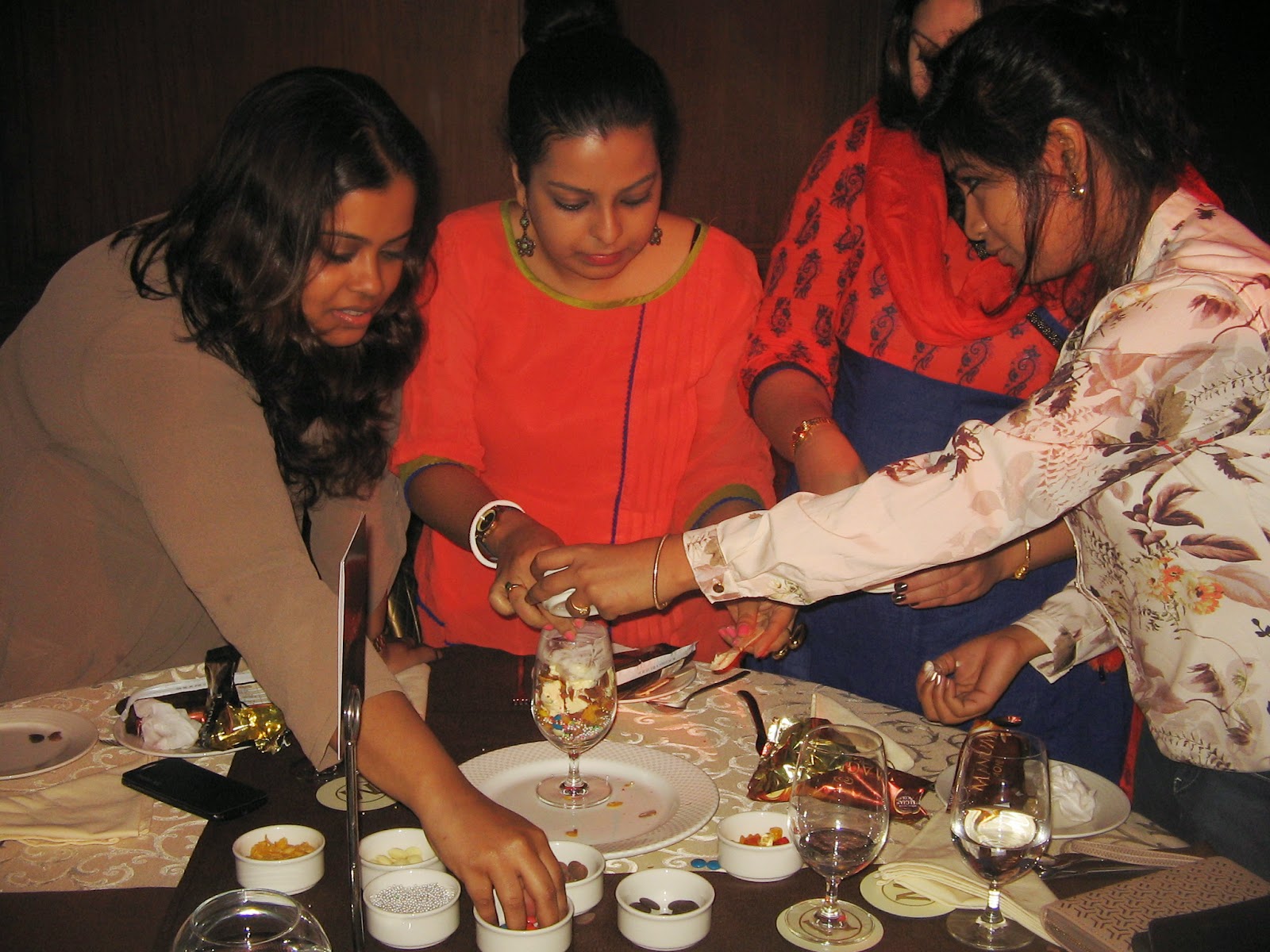 The press kit was innovative. It included the soft copy of the press release and other support material in a chocolate bar shaped pen drive! 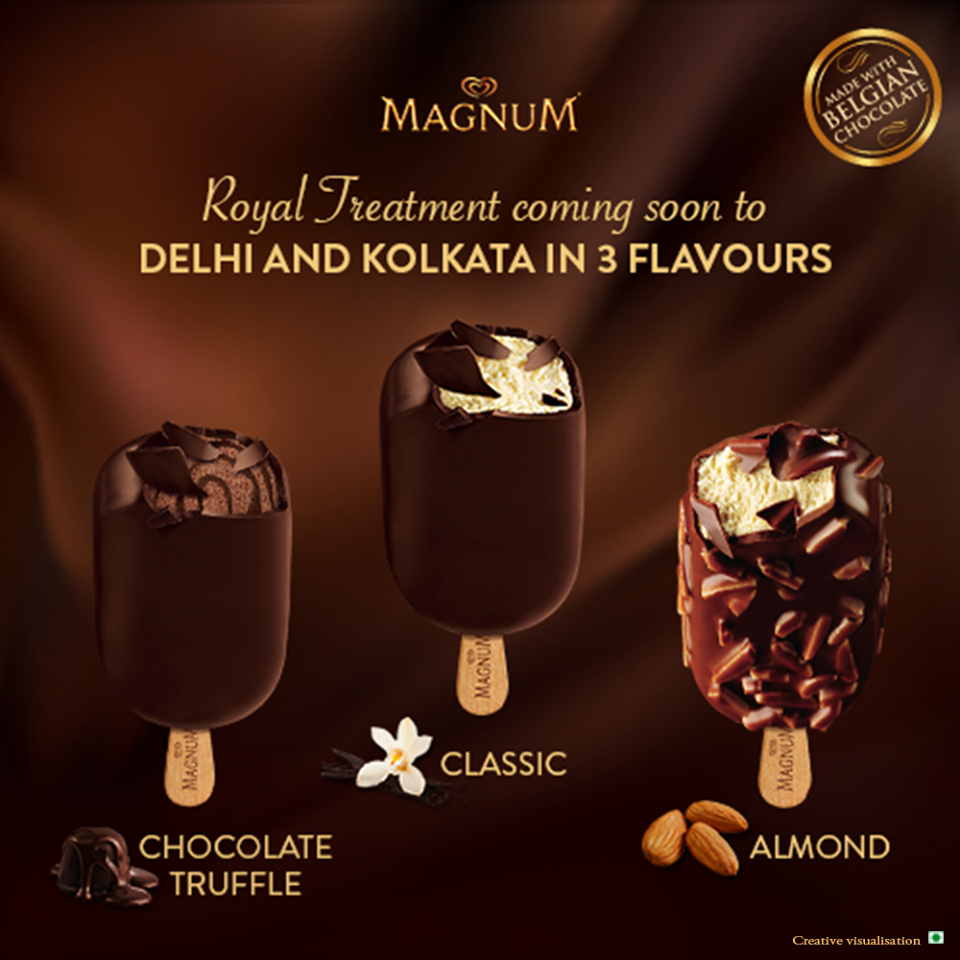 Posted by Anirban Halder at 2:33 AM