The life and times of Miss Shephali

To those of us born before eighties the mention of Miss Shephali is synonymous with the died art of cabaret. It wouldn’t be wrong to call her ‘Queen of cabaret’. We know that she would perform the hot and sensuous dance form in numerous plays in the golden era of professional theatre as a crowd-puller and did so in many movies too. Those who have watched Ray’s Seemabaddha have seen her in performance in a hotel scene, and his Pratidwandi had her play a small character unlike her real self with Dhritiman Chatterjee, the protagonist. Her name had high recall value among the youth of sixties and seventies- the period of her reign in first in city nightlife and later on in Bengali theatre.

But much of her life is lesser known and does evoke curiosity still now. I wish Gulbahar Singh made his planned biopic of hers with Paoli. It could have been our answer (at least content-wise) to The Dirty Picture.

The current issue of Anandalok, path-breaking indeed, satiates the curiosity to some extent. It coincides with the publishing of her official autobiography Sandhya Raater Shephali from Ananda Publishers. 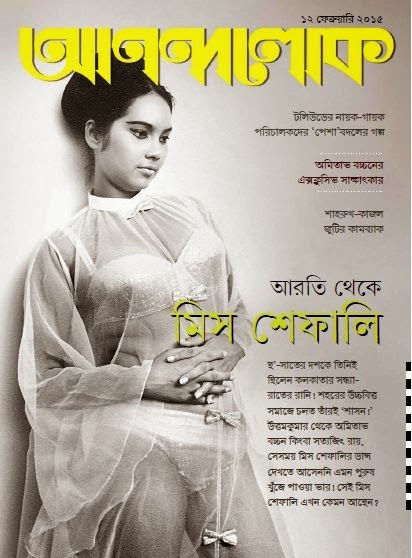 It is full of trivia like the Seemabaddha scene was shot in the same restaurant in the hotel where she would perform every night, and she had to dance before camera with zero preparation as Ray had never briefed her about shooting her, or the abrupt beauty tip she got from Suchitra Sen who used to keep tabs on her, to extremely sensational ones like how she literally ragged Uttam Kumar at Firpo’s Hotel- her own domain, just for fun (She would perform in this elite hotel where the superstar was a frequent ‘front table’ customer) and the subsequent affection of his that lasted many years, and her chance witnessing a private world of the great Amitabh Bachchan.

The youngest of three sisters in a struggling refugee family from east , originally known as Arati Das, she started her career in mid sixties at just twelve to earn bread for her family, as the first Bengali cabaret dancer in Lido Room of Firpo’s Hotel. She never had to look back.

For more, go grab the collector’s issue from the stands.
Posted by Anirban Halder at 1:31 AM