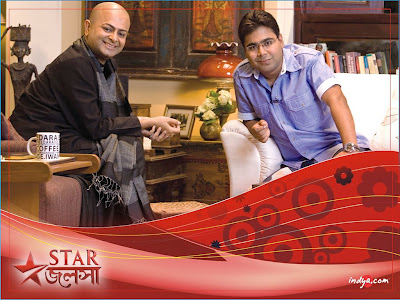 The encouraging no. of responses on the 'Ghosh & Co.' post a little earlier (helped by my Rituparno Ghosh community on Orkut) got me do two things (apart from writing a comment to the 'Ghosh & Co.' post in the first place purely on assumption): a. Watch the repeat telecast of the Mir episode on Sunday 23 November at 5 pm (original telecast on 16 November) and b. Write this post.

Well, it seems the picture above was taken after the now-controversial episode was shot. At least Mir's apparently 'rehearsed' smile says that. And Ritu's smile is a happy winner's, after (verbally) bashing Mir to pulp just before. Just kidding!

The moot point is about the last 21 minutes of the show when Ritu's take on Mir's mimicry reached an uneasy point both for Mir, his admirers and others watching the show on telly. The core of it was Ritu's characteristically yet unusually strong argument to critique Mir's mimicry of effeminate people like Ritu (yes, officially, coming from Rituparno). The point Ritu drove home over and over again was that he was unaffected by Mir's take on him, due to his stature, a greater popularity and recognition than Mir and confidence. But the same may have really hurt many other effeminate people who might pretty well feel Mir was mocking them as well by taking Ritu as a subject.

Mir was so taken aback, as visible in the uncharacteristic surrender, that he shot an open letter in protest of his 'insult' in the show. The letter was reportedly carried in The Times of India the day after the show.

I personally felt that Ritu went a little off the hook probably for the first time ever in his talk shows as the matter was too close to his heart for comfort. Maybe the matter could be handled in a better way had he been able to be a little more objective.

On the other hand, this experience, insulting for Mir indeed as it happened before the audience of an already popular show, might nevertheless set Mir thinking when his anger settles down, and ask himself: doesn't he overstep (he did admit in the show that he does it 'sometimes') in general in mimicking people like Rituparno and Bappi Lahiri by the frequency of the act on his morning show on Radio Mirchi and other television shows he hosts/ has hosted and by the kind of other platforms he chooses (he routinely does it in the award functions he hosts)? I remember once during the last World Cup football he mimicked Bappi Lahiri by comparing his size with a football. Is that in good taste, Mir, or in good spirit, as you claim it to be? Can you ever interview Bappi Lahiri with a clear conscience?

The talk can't end here. There can be many takes. Come...pour your heart over this matter that can really create a storm in the tea cup- a Bengali favourite.
Posted by Anirban Halder at 10:03 PM