The are some films that show and say less, are introvert by nature, yet leave a lot with the audience as they step out of the theatre. Mayurakshi falls in this rare category.

It's about the five days when Aryanil (Prosenjit) comes down from his busy job in Chicago for his ailing father Sushovan (Soumitra) who is suffering from dementia and age-related nervous disorder. He has a sharp memory of distant past, like his son's younger days but not of the time he spent in the cafe with his son a few hours back. It's also about Aryanil's search of a past chapter of his life which brings him a realisation and an impact to his father's life.

Mayurakshi is a departure from conventional narrative-led style of storytelling of Bangla cinema, which is also new to the body of work of Atanu Ghosh. The director has a yen for exploring various thought-provoking subjects in his films and for the creative courage he has shown in writing the film and executing it uncompromisingly to tell a poignant tale that tugs at the heartstrings, it will add the brightest feather to his cap.

The characters are etched with care and they have been given the scope they deserve. Atanu has brought alive Sushovan’s mental condition, knowledge about diverse subjects and deep affection for his son in small, confident strokes. Aryanil is a character which impressed me much. He is sensitive and introvert and his two divorces have made him more reticent. Sahana (Indrani) is a character written in a matured way and such no-strings-attached friend who Aryanil can confide in and share secrets with is exceptional in Bangla cinema.

The way Atanu concludes the film underlines the saying that life must go on while dealing with adversities. 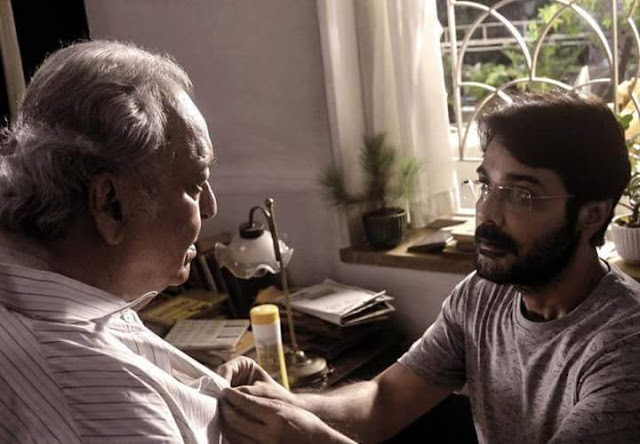 The film is perfectly cast and boasts of minimalistic acting by the ensemble cast where Soumitra shines with an amazingly nuanced act that one expects of a legend that he is. He looks so incredibly effortless as Sushovan that it's hard to believe he is acting. Prosenjit was a revelation for me in this film and due credit to Atanu for extracting this measured performance out of the star actor known for his mannerisms. A role that almost robs the actor of his strongest weapon i.e. dialogue delivery that plays to the gallery, he makes great use of silence, finer expressions a lot of which through his beautiful and expressive eyes. Aryanil is brought to life with all his inner strength to cope with life, loneliness, longing for a true companion and love for his father. Both the actors create an admirable yet poignant father-son bonding that is rarely seen on Bengali screen. Their breaking down scenes towards the end are heart-wrenching. These two roles will remain highpoints of their career. 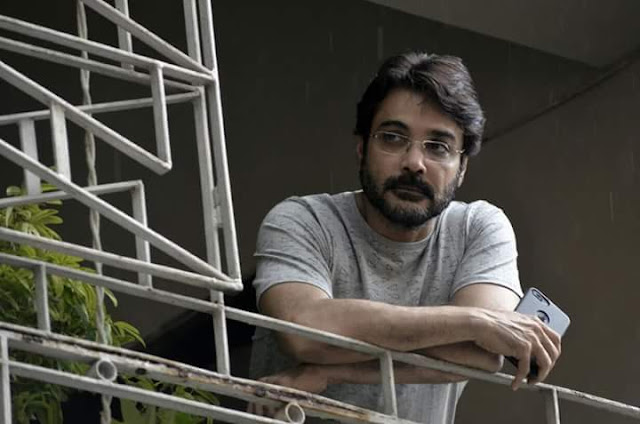 Sudipta derserves mention for her measured and credible act as Mallika, the housekeeper in Sushovan's residence looking after him and Indrani as Sahana leaves a lasting impression. Indrani is a capable and grossly underutilized actress and it was good to see her back after long. The last memorable performance of hers for me was Atanu's earlier film Takhan Teish.

Gargi's small, one-scene presence was much impressive and again it goes to the credit of the director to have extracted a perdformance that is clean of the familiar, refined diction.

Soumik's camera, as always, creates the true feel of an old south Kolkata house.There are many close shots of the protagonists, like those where Prosenjit emotes with his eyes or the soul-touching father-son moments (like the one where Aryanil is dabbing powder on Sudhovan) that are etched out beautifully on screen by Soumik. Editing was a pivotal function for such a film that's a fine weave of moments and Sujoy Datta Ray does a fine job of it, never letting it drag. Debajyoti's background score provides the apt support to the storytelling.

If you liked reading the post, you may visit this blog's Facebook page (click on the link) and hit the 'Like' button to stay connected with the future updates on this blog and more on the page.
Posted by Anirban Halder at 11:10 PM