I love to explore the heritage of Kolkata. So when this invitation came from the Apeejay group for a literary heritage tour as a curtain-raiser to their Apeejay Bangla Sahitya Utsob (a Bengali literature festival) organized by Oxford Bookstore, the heritage book den and Patra Bharati, an old publication house, I agreed to it. It was a tour of the houses of some of the most illustrious names in ’s literary history.

A Sunday afternoon saw a bunch of bloggers and social media enthusiasts hop on a small AC bus from Apeejay House, . It started for the tour around 2.30 pm. Another bus carried mediapersons. It was fun to be in the company of fellow bloggers, chatting away the time in the bus amid our usual banter. RJ Roy, who I know since long before he became popular on radio (the Orkut days), was also with us.

Our first stop was the residence of Raja Rammohan Roy which was later converted to . It is located at () before Manicktala crossing when approached from Sealdah.

The house was built around 1814 on a five acre plot with three ponds. Rammohan used this house to entertain his European friends and hold meetings with his associates and collaborators. The house was built and furnished in European style as described by Fanny Parkes, a well-known travel writer of nineteenth century.

Rammohan auctioned this house to organize funds for his departure for in 1830. The government of rented this house to re-locate police station in 1874. The government acquired this property in 1918 and till 1990s, various offices and senior officers’ quarters have been accommodated in the premises after the police station was shifted again. In 1996, was inaugurated in the house.

It has been a long time wish for me to visit the museum. It is a place to know the rich history of the city police right from pre-independence era. It depicts many well-known incidents from the history pages as well as the last few decades with preserved material belonging to the said incidents (including a large variety of arms recovered down the decades). There are dedicated officers of Kolkata Police who take the visitors through the exhibits.

The museum is open Monday-Saturday, from morning till about 5.30 pm and closed on public holidays. Entry is free. It is an ideal place to visit for children who have studied the freedom movement of in history books.

Unfortunately, photography is prohibited inside the museum and special permission is required to shoot. Hence I couldn’t take pictures to post here.

Among the interesting exhibits are the book bomb sent to chief presidency magistrate of Kolkata DH Kingsford in 1908, made by freedom-fighter Hemchandra Das, and Mauser pistol which fired both in short as well as long range (fitted in the body of a rifle, it used to fire like one) and could be easily concealed as a toy in a wooden case.

It also displays the hierarchy of the police and displays the badges which are worn on the uniform indicating different positions. The commissioner’s badge has a sword and a baton crossed along with stars. Every single badge is noticeably different for concerned and knowledgeable people to make out which position it is for. There is a list of all the city police commissioners right from the first till the previous one along with photographs. The first ever Indian commissioner was Surendra Nath Chatterjee (1947-1951).

An interesting bit of information to note was that the women’s section in Kolkata Police was started as long back as 1949 with nine sub-inspectors and thirty four assistant sub-inspectors.

The house also has the quarters of a senior police officer. I couldn’t resist the temptation to shoot this statue of a fairy in the middle of this manicured garden on the right hand side of the museum where the quarters are located, before I was told that photography was prohibited there too. 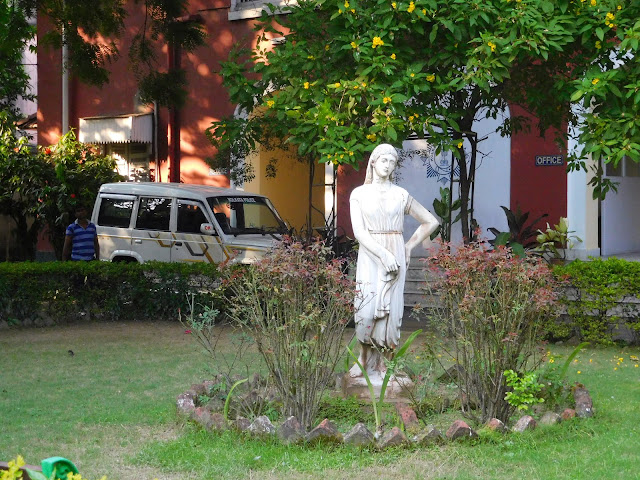 We couldn’t stay for long. It would take at least two hours to explore the entire collection of the museum. I have to come back here.

We walked to our next destination Rammohan Library which was almost a stone’s throw. It was closed that day, so we couldn’t step inside. It’s located at . Noted travel blogger and friend Rangan Dutta shared the history of the place briefly to the participants but I completely missed it.  It was founded in 1904 in memory of Raja Rammohan Roy to support and develop reading habit and create a cultural milieu. The library has a collection of rare books and magazines along with arrangement for research, a dedicated section for children and adolescents, does literary meets and has a permanent exhibition on Rammohan.

We hopped on to the bus and went down near . The destination was noted author and publisher Upendrakishore Ray Chowdhury’s house. It’s on adjacent to which is a few metres away from the science college on the opposite side of the road. It’s a white-coloured building at 100A Garpar road which has been declared a heritage building by The Kolkata Municipal Corporation. The house is not open for public visit.

This was also the house where Upendrakishore’s son, famous children’s author Sukumar Ray lived all his life and his son, globally acclaimed director Satyajit Ray spent the early years of his childhood. Leela Majumdar, Upendrakishore’s niece and a famous author of children’s literarture also lived here. So, it is a rare address associated with three generations of literary and cultural legends who are widely known for laying the foundation of children’s literature in Bengali. Upendrakishore ran his publishing house U Ray & Sons which published the legendary Bengali children’s magazine Sandesh from this address. It also houses a school, Atheneum Institution which was started in 1931.

The bus then took us to through . The residence of legendary educationist, author, reformer and philanthropist Ishwar Chandra Vidyasagar is located behind the park. It’s a nicely-built two-storied house with a long balcony along two sides of the building with an adjacent lawn having an open-air stage at one side. Though this is an IGNOU centre now, it wasn’t open that day. 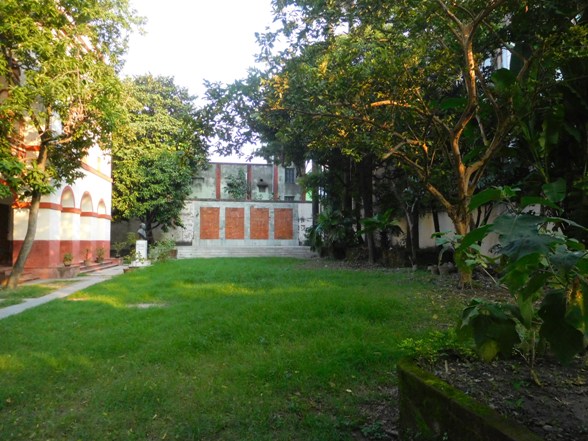 Our last stop was Bangiya Sahitya Parishad at . Unfortunately this was closed on that day too. Founded in 1893 for promoting Bengali literature (including translating literary work in other languages to Bengali), it was situated in the house of Binoy Krishna Deb, the first president, at . After several shifts, it came to the present address on a land donated by Maharaja Manindra Chandra Nandi of the royal family of Cossimbazar. It was first named The Bengal Academy of Literature which was changed to the present name in 1894. Rabindranath Tagore was one of the first vice presidents of this academy.

I wasn’t aware that the homes of several luminaries of Bengali education and literature were located such close to one another in north Kolkata. My sincere thanks to Apeejay Bangla Sahitya Utsob for the experience, especially for the police museum.

If you liked reading the post, you may visit this blog's Facebook page (click on the link) and hit the 'Like' button to stay connected with the future updates on this blog and more on the page.
Posted by Anirban Halder at 6:23 PM