Here are some moments from Pujo (as Puja is called by Bengalis) which is going on from
7th (Shasthi) to 11th October 2016 (Dashami).

Puja is now being referred to globally as 'World's largest art gallery' thanks to the incredible popularity of theme in creating the pandal (marquee) and the idol of goddess Durga among thousands of pujas organised in Kolkata. Let me also say for the records that Puja, without doubt, is one of world's largest and greatest festivals which draws several lakhs of crowd in the city in just the five days.The themed pandals that mesmerize the visitors are actually huge art installations created by qualified and self-taught artists over a long time. The districts have followed in the footsteps competently and have been drawing crowds as well. The picture of the pandal below from the adjoining district of North 24 Parganas is representative of the fact. Many pandals in suburbs and districts can give those in the city a run for their money.

Loved the classical form of idols of goddess Durga and her two sons and daughters in this puja in Ichhapur. Since as per Hindu mythology Durga killed the monster Mahishasura in a fight, her face is supposed to look feisty and angry. This is aptly expressed in the right degree in this idol. 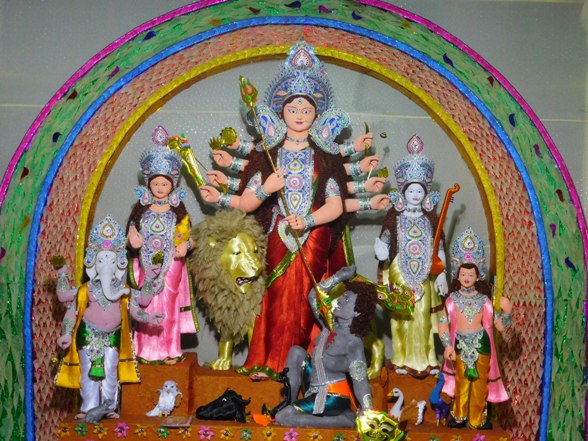 Posted by Anirban Halder at 7:41 PM