There are many other shades of too, which I liked or found highly worthy of mention on my business tour.

The night we drove into from the railway station (coming from in the inter-city express), we stopped at a food zone at Chhappan Market, Palasia, to pick up our dinner. We were surprised to see all the eateries serving customers past 11 o’ clock and young girls and boys in smart casuals roaming around. That’s an average night here, as we were told later by Tiwari. There are places in the city which stay up late. A boon for business travellers like us, I thought!

Later, we took away this veg toasted sandwich (See picture below) from Chhappan Market and quickly polished it off on way back to airport. It was finger-licking good! My ex-deputy told me today that Chhappan Market (alias Chhappan Dukan) is one place where hardcore non-vegetarians may find the vegetarian food tempting. She enquired if I had checked out the jalebi and rabri here.

It is indeed a foodie city. There is another food zone called Sarafa which is an old shopping area selling silver jewellery, silverware and books where people eat snacks like kachori, samosa, jalebi till 1o’ clock in the night. Many of the famous pan-India food chains have presence in the city (KFC, Domino’s to name just a few).

Poha and sabudana khichdi are popular among snacks. I like poha as it is healthy unlike most Indian snacks. Thanks to Tiwari’s prodding I sampled the sabudana khichdi from street side. I think it is better called sabudana chaat as the vendor who I had it from took few tablespoons of boiled sago and put bhujia, arum chips, chopped onion, coriander leaves, boiled chilli, salt, spices and a squeeze of lime in it and made it taste yummy. We ordered in poha for breakfast in the client’s guest house in the last morning. They eat poha like a chaat too, much like the sabudana khichdi. is also known for its range of namkeen.

The city impressed me in our seven-city business tour which started in phases last month, covering , , , , , Jaipur and . Primarily because I found Indore clean, its people well-behaved and its blend of modernity and old-world charm. In the behaviour bit, it stands in a contrast with our experience in Jaipur. The railway station is large and clean too.

Though I am not a religious person, I went to this temple known as Shri Khajrana Ganesh Mandir to accompany my team member in the evening, and I was impressed with the degree of cleanliness of the large temple complex spread over a few acres including a huge free parking area. Tiwari attributed the credit of it to the corporator. It was 15th September, one of the days of Ganpati visarjan (immersion of idol post-Ganesh Chaturthi), yet it fetched a crowd and there was a long queue for the puja.


The architecture of the temple building was beautiful. I won't be surprised if it inspires a Puja pandal in Kolkata someday or or has already inspired one.

It is one place where people of this city come for puja when they buy a two-wheeler or a car. We saw a few vehicles with the puja already performed on them. 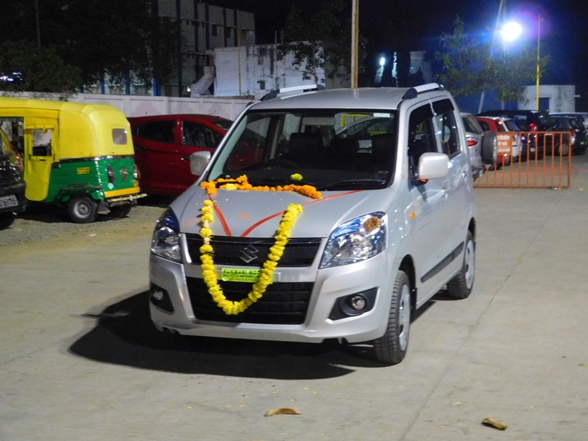 Indore also has the distinction of being the only Indian city having an IIT and an IIM, Sunil Sharma, a Sales head of Birla Corp, our client, informed us. Our business tour was for training the sales and service teams of the organization for a CRM programme we were doing for their cement dealers.

, the town in Rajasthan, is famous for its coaching classes for competitive exams and known as ’s coaching hub. But it has lost some of its sheen to in recent years as some of the leading coaching institutes have opened centres in (Allen Career Institute, for instance). What works in favour of are better connectivity (as Sunil informed us) and better weather (as Tiwari told us) than . IIT entrance classes are the hottest in demand, I was told. This phenomenon has resulted in an influx of students from various parts of who enrol in the coaching classes.

Tiwari also shared with us that the people in the city, both men and women,  have an inclination to work hard for a better life. Many women from the lower-income group work part-time and it shouldn't be a surprise to find LED televisions in slum homes.

It was interesting to come across i-bus (indicating intelligent bus) and its stand, which was the landmark of our guest house. It is part of a state-of-the-art bus rapid transport system of the state government for city in operation since 2013. The low-floor buses are air-conditioned, fitted with GPS device, offer on-board free Wi-Fi and run on advance signal systems based on data-centric algorithms. The bus stand looked futuristic and the first-of-its-kind I had seen in any city! It was air-conditioned and I spotted a vending machine of soft drink.

, I would like to come back and explore you! An i-bus ride will definitely be on the wishlist.

If you liked reading the post, you may visit this blog's Facebook page (click on the link) and hit the 'Like' button to stay connected with the future updates on this blog and more on the page.
Posted by Anirban Halder at 6:42 PM

Email ThisBlogThis!Share to TwitterShare to FacebookShare to Pinterest
Labels: Travel and outing