Good Vegetarian Food of Calcutta group meet on blogging at The Chutney Co.

She kept on saying, “Please have your food first. It won’t taste as good if it gets cold. You can shoot later”, fully knowing the photographs shared on social media would benefit her new restaurant.

We were served a platter at the meet of our Facebook foodie group and some of us who blog and share pictures on social media were busy shooting the food first habitually. And the host wanted us to concentrate on the food first.

Let’s go back a bit. I came to know about this Facebook group 'The Good Vegetarian Food of Calcutta' offline. I got introduced to a middle-aged gentleman called Devashis Kuthari in a seminar on blogging at The Park hotel, Kolkata, in May by Abhishek Chamaria. Abhishek was one of the speakers and we knew each other only through Facebook. I had made one of his pictures of the city the cover picture of this blog. Devashis runs his own business but this group is his passion, through which he wants to cultivate and promote various vegetarian foods and food cultures. A point to note is that it is not meant for vegetarians only, but the posts will have to be strictly about vegetarian food. What I found the most impressive about this group was its huge member base (which stood at 29000 on that day) and that it is actively managed. All the posts are moderated by alert admin members and nothing which doesn’t conform to group rules is accepted. We spoke for quite some time and he told me a lot about his group experience, the foodwalks organized, the plans (that includes a group website) etc.

I became a member of the group that night. By that time Devashis had gone through this blog. He suggested that the then last post, on the food festival at Casa Kitchen, which was a vegetarian affair, should be my first post in the group. I did the needful and went on to become an active member of the group- commenting, joining interesting conversations and sharing links of posts on vegetarian food from this blog. The member base has been on a steady rise and crossed 32000 towards the end of June.

I was happy and excited when Devashis invited me to the next group meet on ‘How to do food blogging’, aimed at aspiring bloggers in the group, as a speaker. It was both my first assignment as a speaker on blogging and the first meet of any Facebook group I am a member of. The second session was to be taken by Abhishek- on food photography, for the purpose of blogging and otherwise. Besides being a social media strategist and a blogger, Abhishek is a passionate photographer and he calls his work mobilography since he is a pro at shooting with his iPhone. So I landed up at the venue- The Chutney Co. – the brand new south Indian vegetarian restaurant in Dalhousie area, on the first floor in the Great Eastern Trading Co. building, bang opposite The Lalit Great Eastern, in the afternoon of the last Sunday of June (28th).

The restaurant was full. Since it hosted our meet, we were given a spacious area- an entire hall with tables joined to make a T-shaped seating. About fifteen members had turned up to make it a full house.

My session was to be a spontaneous one. Since I didn’t know the audience and their expectations, I hadn’t prepared a PowerPoint presentation. I started with the basics- what a blog is, what a food blog is like, how and where to start one, what the ideal posts for a newcomer should be like, talking through pictures et al. The audience was participative and kept on asking questions, including those on the technical aspects and micro details (like how to label a post to reflect its various aspects). The most diligent in the audience was Navin Agarwal who took down notes on his notebook besides placing queries. It then moved on to a live demo of starting a blog and making a blog post on Blogger. It was a satisfactory session over good filter coffee.

As the food was ready, Abhishek’s photography session was postponed. We were served a platter of Molagapodi Idli, vada, Tomato Sevai and Paneer Frito. The first is a steamed idli with ghee and sprinkling of molagapodi, popularly known as gun powder all over. Molagapodi is a coarse mixture of lentils, chillies and spices that is popular as a condiment in. Sevai, I found, was a south Indian take on noodles. It was tangy and spicy rice noodles tossed with tomatoes and curry leaves, which I liked. The Paneer Frito was crisp paneer fingers fried in a batter. All the items tasted good- the idli tasted better with gun powder and the vada was perfectly crisp, with black pepper in it, adding to the taste. The sambhar had a tinge of sweetness which I liked.

To go with it were three chutneys. And here comes the USP of the restaurant, as explained by Pooja Baid, the owner and a young entrepreneur of the city, who was hands on in supervising our service and took us through the names and details of everything served (and insisted on having the food hot first as you’ve read in the beginning). Pooja has the success of the casual dining chain behind her.

What makes so many variants of any branded potato chip taste different from one another? After all the chip is the same in every pack. It’s the flavour that creates the difference. Similarly what sets The Chutney apart from other quality south Indian restaurants in town is its chutneys. They have a range of nine and let you choose any three with any dish you take.  The nine is an eclectic mix, starting from the basic white coconut chutney to the tangy raw mango, the spicy peanut and the rare curaikkay (bottle gourd) chutney. Others are a spicy version of the coconut chutney, Mysore Chutney, Coriander Chutney, Spicy Tomato Chutney and Sweet Onion-Tomato Chutney. The chutneys were mixed and matched in serving us so that none got the same three. We happily shared our chutneys to sample more of them. I got the white coconut chutney,  Spicy Tomato Chutney and the Curaikkay (or 'lauki') Chutney. I am not fond of bottle gourd, but I liked its chutney. I also sampled the spicy peanut and the raw mango ones. Liked the former and loved the latter, as I am a mango freak and like it in any form. The wide range of chutneys gives a diner the opportunity to rotate the choice of three on consecutive visits, which will give a different taste experience every time.

The next on our plate was an extraordinarily large idli. Pooja said it was Tatte Idli. Its preparation is a little different and there’s a backstory. It is believed to have originated on the Bangalore-Mysore highway where a highway vendor chanced upon the idea of setting idlis in plates rather than the customary moulds, as he had to make a lot of idlis quickly. The idli turned out to be not just large in size but super soft and light. It caught the attention of most travellers on the highway and soon nearby vendors started making it. Since we were full having so much after the lunch, we shared the Tattte Idlis. And they were softer than regular idlis. We ended the meal with a piece of delicious chocolate cake each which came from the outlet inside the restaurant. 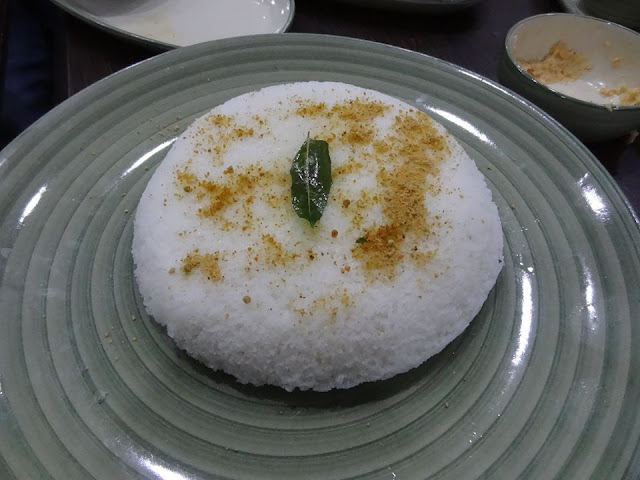 Pooja shared her take on the coffee. This beverage down South is not just a quick caffeine fix, but almost an obsession to make every cup perfect. There are housewives who go to the local shop everyday, gets the coffee beans ground just for the day to have a fresh experience everytime. Keeping this sentiment in mind, she took the assistance of the Coffee Board of India to develop a superior blend of pea berry beans that are freshly ground in the restaurant and filtered using the classic South Indian technique.


The Chutney Co. seeks to redefine South Indian dining experience in the fine dining space, by giving the traditional elements a new avatar. Breaking the stereotype, both the menu and the décor promise a fresh experience. One interesting part of the nice décor was snippets of artistically handcrafted on wooden platters on the walls. The prices are a bit on the higher side (A dosa comes at Rs 70, masala dosa at Rs 95, plain idli and vada cost Rs 60 each and the sevais- lemon, coconut and tomato- cost Rs 80-90), but they are worth it for the discerning diner.


Abhishek’s session followed. He taught us how to frame a picture well among other things, with instances of how not to do it, which helped. As required, he gave us a live demo by clicking pictures of the food served for the purpose of shooting and showed how to bring out creativity in it. It was a useful session, as expected, for me and other members.


One of the members present was the man behind Pabrai’s Fresh & Naturelle ice cream, which is gaining popularity over the last few years- Anuvrat Pabrai, a food technologist with a long experience in hospitality industry. He introduced us to a member much younger to him- a well-known food blogger and one of the top reviewers of Zomato and Burrp- Rajdeep Bhattacharjee. He had a short, informal session where he took us through his blogging experience and the recognitions and opportunities that came his way. It opened new doors before me. I spoke to him post the session and exchanged notes on food blogging and opportunities in it with a promise to keep in touch.


A word of thanks to Devashis here- the hands on group admin who ensured the members are comfortable and the meet progressed as per schedule. He kept mingling with the members and let them enjoy as they wanted to. The group is lucky to have him at the helm.

One more enriching aspect of the meet was meeting some interesting people. Like Mr Pabrai, who is consulted by the Taj group on their ice cream offering. His Fresh & Naturelle ice cream lives up to its name by mixing real fruits with ice cream and creating innovative flavours in its eight parlours in the city. I’m told his 'Nolen Gur' (jaggery) ice cream is fabulous. Met Vinay Menon, who runs an innovative food home delivery business in that of home-cooked food, by working with home-based cooks. It will be an experience to stay in the mind for long.