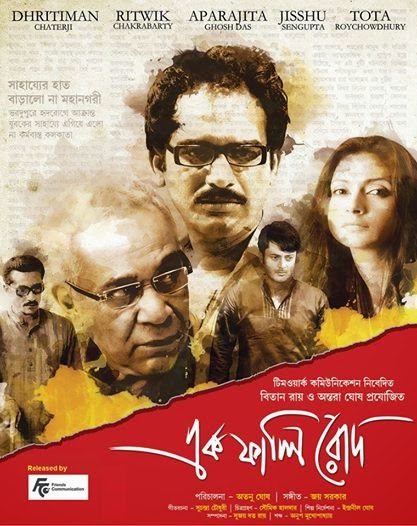 I have liked the craft  of Atanu Ghosh right from his telefilm days for his choice of subjects, his ability to develop the characters and storytelling. His debut film Angshumaner Chhobi (where he gave first break to one of my favourite actors Indraneil Sengupta) was critically acclaimed. I liked most of his second film Takhan Teish. But I loved his last outing Rupkatha Noy which was received well by the cinema-loving audience. As the countdown for his December 5 release Ek Phali Rodh is on, the director makes time for an exclusive interview to this blog on his new film. It has an impressive lead cast of Dhritiman Chatterjee, Ritwik Chakraborty, Jisshu Sengupta, Tota Roychoudhury and Aparajita Ghosh Das.
Kolkata Curry (KC): Ek Phali Rodh revolves around the bystander effect. The subject sounds more documentary than a full length feature film. What made you approach and develop such a subject for the big screen? Weren’t you apprehensive of audience acceptance?
Atanu Ghosh (A): On the contrary, I feel there is little you can ‘document’ about Bystander Effect, because it happens in reality and you do not know when it is going to happen ! So you cannot get prepared to photograph it unless you have CCTV cameras fitted in every nook and corner of the city that captures real life. What drew me to the subject was the method adopted by social scientists to study it, that is, the process of creating ‘mock’ crisis. Fiction films are about ‘mock’ situations and ‘crisis’ is the most dominating dramatic interest in any fictional film. So I had no apprehension whatsoever regarding the choice of the subject and I knew for certain that it has all the ingredients that go into making of an engrossing fiction film.

KC: Like your last film Rupkatha Noy, does it also have stories running parellely?

A: No, here a group of people get assembled towards the common cause of exploring the process of Bystander Effect, that is, the socio-psychological phenomenon where people do not offer any help to a stranger in crisis. But, thereafter the film branches out exploring other facets of life. So the Bystander Effect is actually the springboard from where the film originates and then undertakes a journey of self-discovery.

KC: The shooting must have been challenging, considering you did candid shooting on real locations for some outdoor scenes.

A: Since the issue is straight out of our lives and directly related to our own experience, I wanted the film to have the feel of emerging out of ‘real’ life. I avoided all sorts of made-up or decked -up situations, which is normally done in case of fictional films. So it is like ‘photographed reality’. No superficiality. No overplayed emotion. No pretension. We shot in crowded roads using hidden cameras and even when the locations were indoor, we chose places like general ward of public hospital during visiting hours. So, the actors, in a way, mingled with the general crowd to get as close to reality as possible. Yes, it was very difficult at times, but very really challenging as well.

KC:  Like the last one, this also has an ensemble cast. Please share with us how you went about casting the main characters.

A: Never before, I had so many of my favourite actors working together, as in Ek Phaali Rodh. I craved for those who keep us glued to the screen not only for the principal cast but also for the notable cameos. So we have Dhritiman, Ritwik, Jisshu, Tota and Aparajita playing the lead while Rudranil Ghosh, Arunima Ghosh, Dulal Lahiri, Barun Chanda and Arindam Sil have enriched the film with their brief but glowing presence. And keep your eyes open for two young debutants who are bound to steal the show - Mahua Halder and Aritro Dutta.

KC: Do you think Tota is an underrated and underutilised actor ?

A: Undoubtably so. The effort Tota puts into a role is incomparable. His willingness to push his capacity to its limits has given us memorable performances in Chokher Bali and Angshumaner Chhobi and I really believe he would be a revelation in Ek Phaali Rodh as well. He has put in an entirely different body language to bring out the contrasting qualities of strength and vulnerability in the role of the blind author of love stories.

KC: Joy Sarkar has scored the music again for your film. How have you used it in the film ?

A: I always want music to flow out effortlessly from a film. I don’t want them to remain separate entities as song numbers or background pieces. They should integrate into the fabric of the film and become quite invisible. Joy is remarkably spontaneous. He can effortlessly blend a song into the fabric of the film. In Ek Phaali Rodh, the songs provide an alternate layer of input – sometimes they hold a torch to a character’s psyche, sometimes they add a footnote to the images and sometimes they even suggest an alternate interpretation of the scenes.

A: In the last few years, I am really drawn to the wide range of subjects that Bengali films are trying to explore. It’s really fascinating to come across some specimens of unique concept and novel treatment. In 2014 too, I liked quite a few films for various reasons, the last one being Chotushkon for its distinctly different form of storytelling.
Here’s wishing Ek Phali Rodh all the very best.